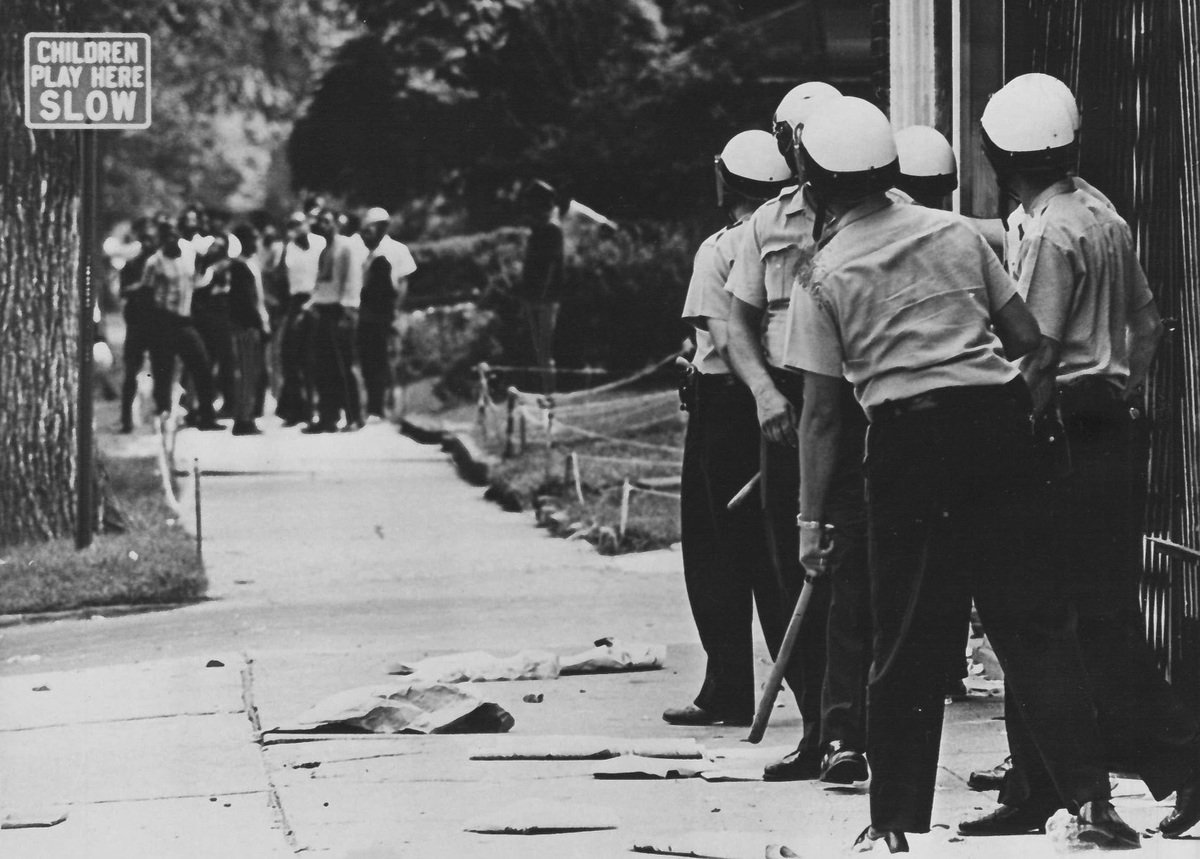 The Detroit Police Department Implemented Polices of Racial Profiling, Stop-and-Frisk, Surveillance, and Youth Criminalization in Black Neighborhoods in the 1960s

Detroit came under fire during the civil rights movement. Police brutality and racial violence plagued the city’s well-being and left seemingly permanent damage. We chose this title to capture the feeling of those who fell victim to the Detroit Police Department’s reign of terror. The city was “under fire” in the sense of both gunfire and intense criticism. Certain parts of the city also went up in literal flames during the 1967 Uprising. Throughout this period, the walls protecting African American communities from violence buckled due to the influx of officers into their neighborhoods. Traffic stops that led to arrests were common, discretionary policing prevailed, and social activities were criminalized. Engulfed in flames, the African American community was surrounded by police.

The term “Crime Politics” in the title refers to the political nature of the DPD, the legal and political actions of civil rights groups, and the overall relationship between criminology and politics. Political institutions have command over criminal law, giving politicians and eventually policy itself, the tremendous power of criminalizing an action or behavior. Political ideologies therefore determine the course of law enforcement efforts: punitive, or rehabilitative.

This project was created and designed with particular audiences in mind. In a sense, this being an academic undertaking, the website is geared towards an academic community. Ideally, the documents we included combined with our research questions and findings will lead to further research conducted by groups of academics at other major institutions. More importantly, we created this site for the people of Detroit. The citizens of the Motor City showed resolve, resilience, and strength during the Civil Rights Movement. In combating police brutality and racial violence, the African American community demonstrated remarkable feats of community-organizing, social activism, and protest. The citizens of Detroit have a right to know about the actions of their police department. With that in mind, this project will hopefully be viewed by the DPD. We have organized our website to be a one-stop site for aggregate information about the racial violence committed by the DPD. It is our hope that the website will be used by those who have an interest in, but little time to research, what lies in the archives and databases we have scoured. If the department had access to this sort of research project, they too may learn from it. Additionally, we designed this site to be a database for future researchers, including Detroit-based civil rights groups. This project could serve as a point-of-reference or even source of new material for these groups. Lastly, we designed this course for the general public. Police brutality has been a headline in national media for the past several years, but this has certainly not always been the case. Incidents during the Civil Rights Movement were systematically covered up, and the US population deserves to know about them. Hopefully our work will shed light on the fact that, although police brutality is perceived to be a southern problem, it transcended and continues to transcend regional borders.

The exhibit is built for the affected communities and the interested public, but its sole purpose is not simply to provide information on policing and criminality in Detroit. With such expansive research comes a responsibility to the victims of such police misconduct and to their families; we feel honored to be able to tell their stories and validate their experiences. Many of our findings revealed the political nature of so many “official” narratives spun out of police violence, often silencing victims and erasing the harm that was caused to individuals, families, and whole communities. Police misconduct has a long history in the United States, and, though this exhibit only covers so many years, we hope it is effective in pushing back on the authority we give to the narratives spun by police and even by the local government. We also hope it pushes back against the dominant understanding of police brutality as something only experienced in the South.

The police are not public or civil servants but rather are a political institution. Police procedure and culture is heavily tied to federal and local administrations. Administrations from conservative and liberal political groups both used the police to enact their crime policies.

Our goal in presenting the information we’ve found and our analysis of it is not to cast the police or any other historical actors as senseless villains. Rather, the exhibit aims to connect the national and local contexts with the policy that put police in the discretionary positions that resulted in so many deaths and injustices. As historians, we feel obligated to present all perspectives we come across, but we won’t shy away from drawing our own conclusions when presented with sufficient data to back up our claims. On numerous occasions, we found that horrible acts were committed by DPD officers. We have also found that, for many of those occasions, Detroit and even the entire U.S. lacked comprehensive policy to address the misconduct or the faulty system of accountability. The conditions that lead to police brutality are produced not only by policy and the police themselves, but also, in part, by the public. In cities across the U.S., public opinion has been the driving force in supporting questionable police practices, like in New York, where they repealed a civilian review board. In the city of Detroit, a large portion of the public (mostly the white and middle-upper class residents) acted in support of the police and even as an obstacle to police reform and community organizing throughout the 50s, 60s, and 70s.