Just after midnight on March 9, 1972, in a shooting since called the "Rochester Massacre," three Black STRESS officers and two white Detroit Police Officers killed deputy sheriff Henry Henderson, shot and permanently injured deputy sheriff James Jankins, and shot and beat two other deputies and three citizens. The chaos began when the three STRESS officers Virgil Starkey, James Harris, and Ronald Martin, barged in on a poker game between six Black sheriff's deputies Henry Henderson, James Jenkins, Henry Duval, David Davis, Aaron Vincent, and their friend Richard Sain, in an apartment at 3210 Rochester, without any cause. All of the deputies were Black. While all the details of this event are not completely clear, it was evident that officers had no justification to enter the apartment. This was not the first STRESS shooting that caused calls to abolish STRESS from Detroiters. The shooting of Ricardo Buck and Craig Mitchell by STRESS officer Richard Woirobec on September 17, 1971, drove thousands of Detroiters to the streets to protest STRESS. The Rochester Massacre stands out because here, STRESS was responsible for killing other police. Here, STRESS could not slander their victims as simply "muggers," "felons," or "criminals" because their victims were police officers. 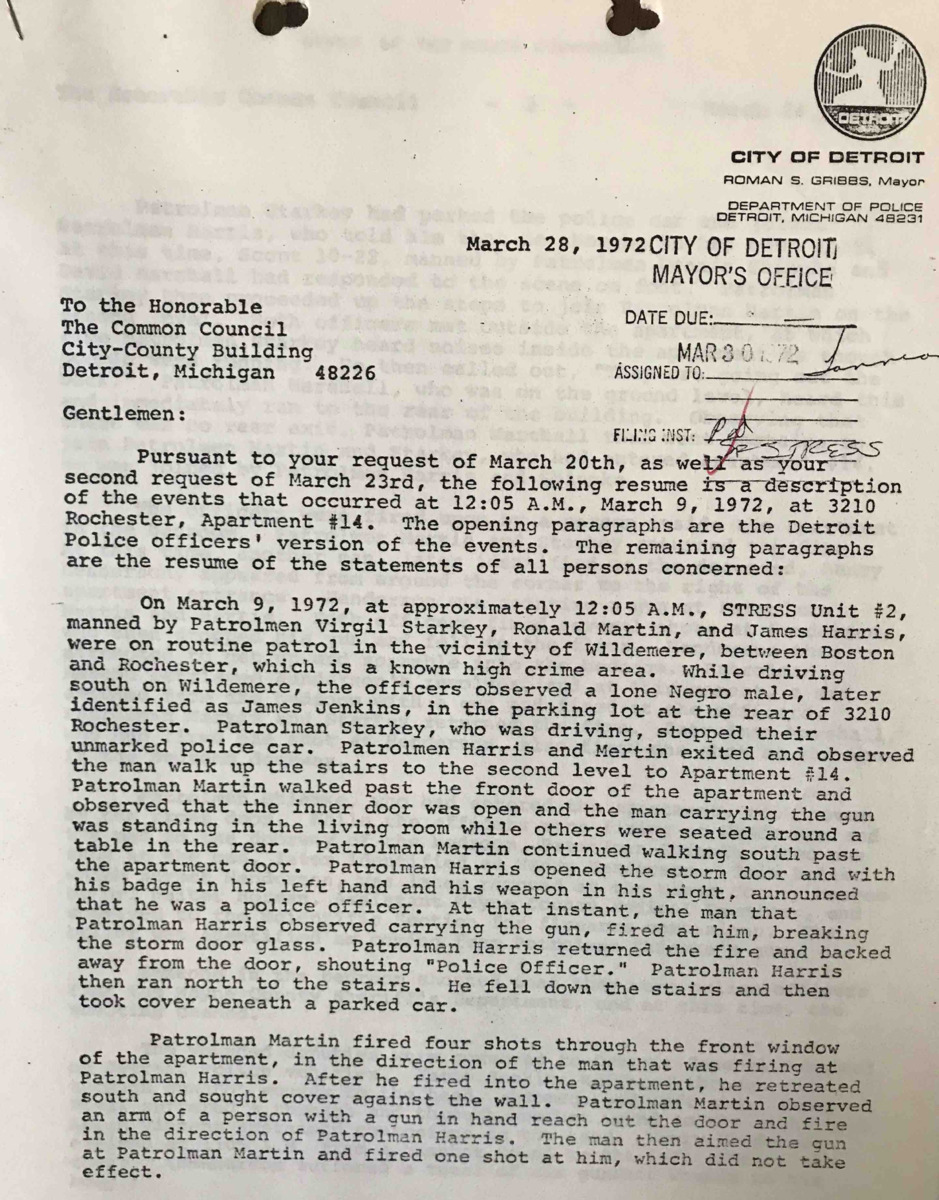 The Lead Up to the Shooting

STRESS officers Virgil Starkey, James Harris, and Ronald Martin said they observed a Black man entering the apartment with a gun. This man was Deputy James Jenkins. He did not carry a gun; he was joining his friends, Deputy Henderson, Deputy Henry Duval, Deputy David Davis, Deputy Aaron Vincent, and Richard Sain, in a poker game.  A Wayne County Sheriff’s Department investigation revealed that it was impossible that officers saw Jenkins with a gun from their reported position because only his head would have been visible from that position. The report stated, “STRESS officers had no probable cause or reason to enter apartment 14... making any and all acts beyond this point unjustifiable.”

Harris and Martin exited their vehicle and ran up the stairs. Harris entered the apartment, weapon drawn, with Martin behind him. At this point, the testimony given by the STRESS officers and the deputies in the apartment diverge. The STRESS officers claimed that Harris announced himself as a police officer, then Deputy Jenkins fired at him, starting the shootout. However, some of the deputies alleged that Harris entered the apartment yelling “come on out of there motherfucker!” What is clear, the sheriff's investigation shows, is that deputies inside the apartment fired only six shots, all of which were accounted for and occured during the first moments of the confrontation, and all of which were fired by Deputy Jenkins. However, STRESS and DPD officers fired 44 shots into the apartment. 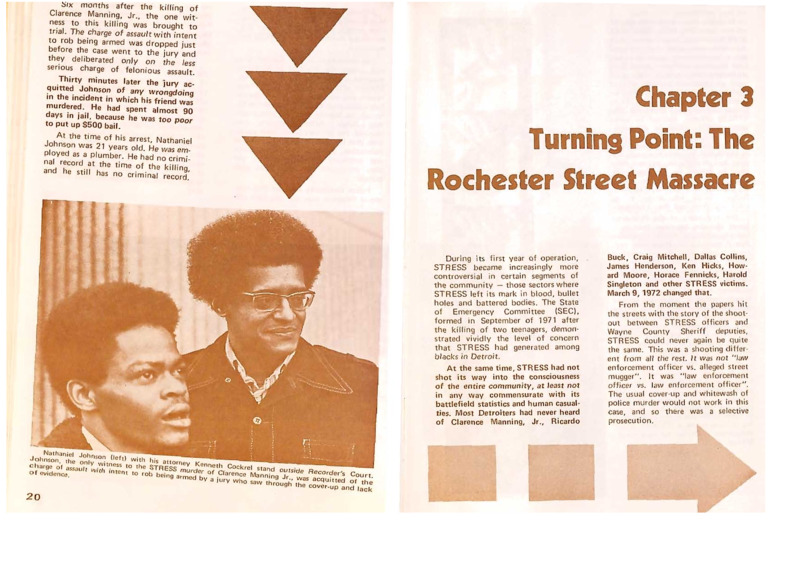 DPD Patrolman Dennis Shiemke and David Marshall, both white, who were making a traffic stop at Rochester and Wildemere, on the same corner as the Rochester apartment, reported that they were under fire. However, the investigation demonstrated that at no time were they under fire. Then, these officers entered the court in front of the apartment building and again reported they were under fire. Again, the sheriff’s report revealed more lies. Shiemke and Marshall were never under fire, as all the shots from inside the apartment were accounted for at the onset of the shooting.

After Shiemke and Marshall arrived, all of the officers entered the apartment. They claimed that they were being shot by the deputies in the rear of the apartment, but the officers lied, as all shots from those in the apartment were accounted for at the outset of the shooting. Even if the deputies in the apartment were firing at the officers attacking the apartment, the sheriff's investigation noted that the officers' decision to storm the apartment did not make sense. The investigation said: "it is inconceivable to imagine police officers would openly expose themselves in an open frontal attack against 5 or 6 armed men, as their statement indicates, firing at them. Normal police policy in a case such as this would be to await re-enforcement and attempt to use tear gas."  Once in the apartment, Marshall fired six shots, and Starkey fired five shots toward the rear of the apartment. During this, as civilian witnesses confirmed, the deputies under fire in the apartment repeatedly yelled “We are Wayne County Sheriff’s Officers!,” and the attacking officers seemingly ignored this.  During the hail of gunfire in the apartment, Deputy Henry Henderson stood up, held out his badge, and said “man, y’all are wrong.” He was fatally shot by Patrolmen Shiemke six times. (Detroit Free Press, March 12, 1972) While Martin and Harris claimed they saw Henderson point a gun at them, Shiemke did not see a gun. Duval suffered a gunshot wound to the leg. Jenkins was critically wounded, but he survived. Duval, Davis, Vincent, and Sain all alleged that officers dragged them out of the apartment bedroom and beat them after the shooting stopped.

After the mayhem at Rochester Street stopped, Aaron Vincent's fiance, Gwendolyn Kreger, and her stepmother, Norma Jones, arrived at 3210 Rochester. Kreger was talking on the phone with Vincent when the shooting broke out, and she rushed to the scene. Kreger and Jones said that a white STRESS officer assaulted them when they arrived. Two Detroit Police officers drove deputies Duvall and Henderson to Detroit General Hospital. Investigators noted that the officers drove directly past Henry Ford Hospital, and that Detroit General Hospital was much farther than Henry Ford. The officers transporting the wounded deputies said that the Ford emergency room was full when they got there. Investigators found that these officers lied because not only was there room in the Ford hospital, but there was a team of doctors awaiting wounded from the Rochester shooting. The evidence from the investigation makes it seem as if the Detroit police wanted to delay medical care to the wounded deputies. 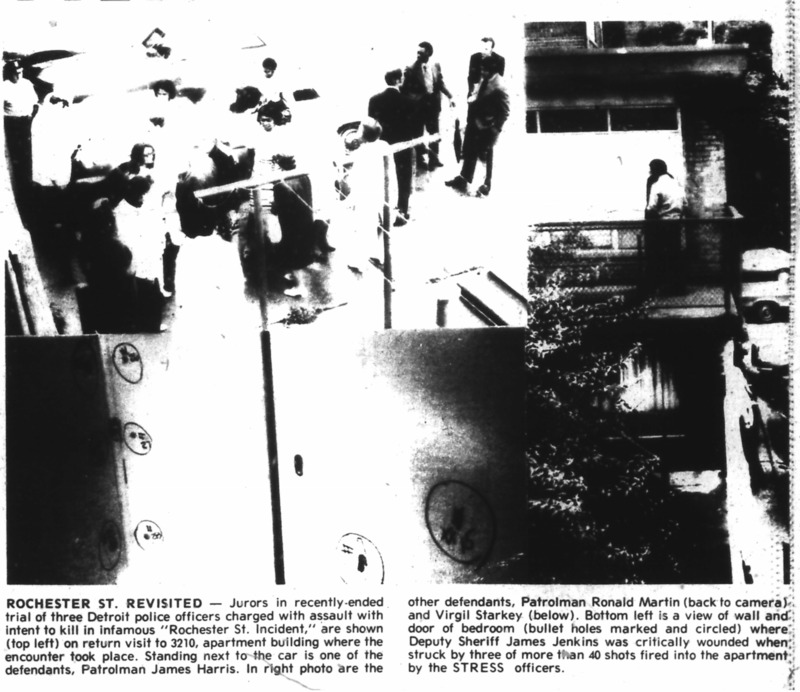 Lack of Outcomes and a Suspected Cover-up

The DPD ruled Shiemke’s actions “justifiable homicide,” and said he was acting “in the line of duty.” Jamil Akhtar, head of the Wayne County Deputy Sheriff's Union, said to the Detroit Free Press that he and fellow deputies feared a cover-up of the Rochester shootings. He said the union would not put up with "a whitewash for political expediency." An anonymous "concerned citizen" who wrote a letter to Lucas following the Rochester massacre said, "If that had been a Black police kill a white police, it would have been murder in the first degree... I felt safer in the street before STRESS. Because they kill you for nothing and only Black people. Anyone can see that." It took twelve days for the DPD to arrest suspects and subject them to lineups. When witnesses finally had the opportunity to identify the perpetrators, the DPD moved to protect the officers who killed deputy Henderson and shot and beat others. For example, witnesses were bombarded with "endless viewings of 111 volunteer police lookalikes" to confuse the witness and therefore make the conviction of the officers involved less likely.

Wayne County Prosecutor William Cahalan charged Harris, Starkey, and Martin with assaulting Deputy James Jenkins with intent to murder.  Cahalan's decision was shocking at the time because in almost every other similar officer-involved case he refused to levy charges against police officers who kill or victimized Detroiters. While he did charge the police officers, Cahalan had no interest in actually convicting any DPD officer for the Rochester Massacre. Cahalan never indicted Patrolman Shiemke, who fired the shot that killed Deputy Henry Henderson. Cahalan said that Shiemke "acted to protect the lives of his brother officers and himself," despite the fact that Henderson was unarmed, and that Henderson may have been lying on the ground, wounded by five other gunshots by the time that Shiemke shot and killed him.

During the trial, Detroit judges accused the Wayne County Prosecutor of using "erroneous statements of law" to "inspire fear in the minds of grand jurors," and said the prosecutors actions "amount to improper conduct and an abuse of discretion." The prosecutor's office wanted a not-guilty verdict and was satisfied when it got one.  On August 10, 1972, a jury found Starkey, Martin, and Harris not guilty. The officers returned to duty after the trial. The value of the statements of the victimized officers and the sheriff's office investigation was not enough to hold accountable the men who instigated the Rochester Massacre. After the trial concluded, attorney George Bushnell said: "We may never know the whole truth about this thing." Despite a lack of criminal convictions, some victims and their families successfully sued Detroit for financial compensation. Jenkins, who was left with brain damage and was blinded in one eye as a result of the shooting won $1.5 million in a suit, and his wife won $450,000. The city paid $775,000 in an out of court settlement to Henry Henderson's wife, Paulette. 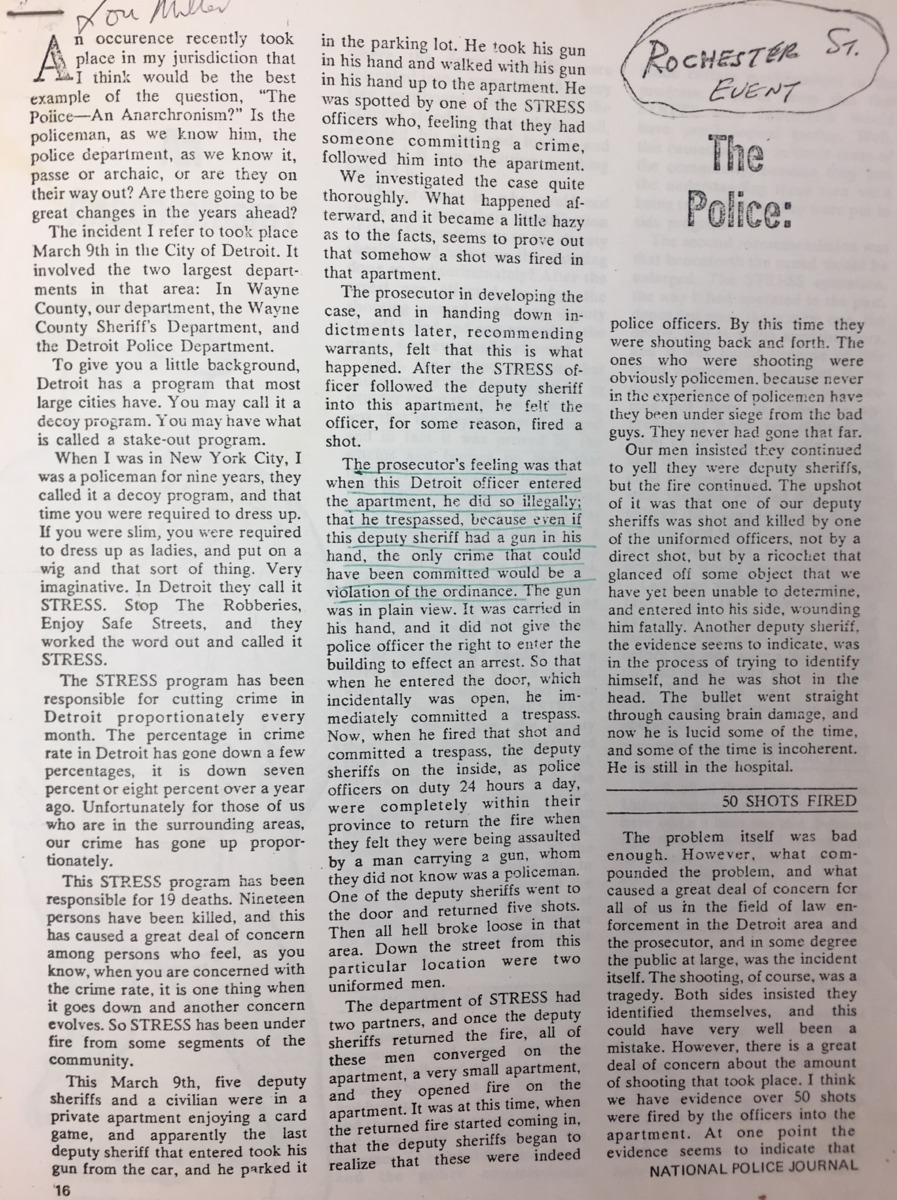 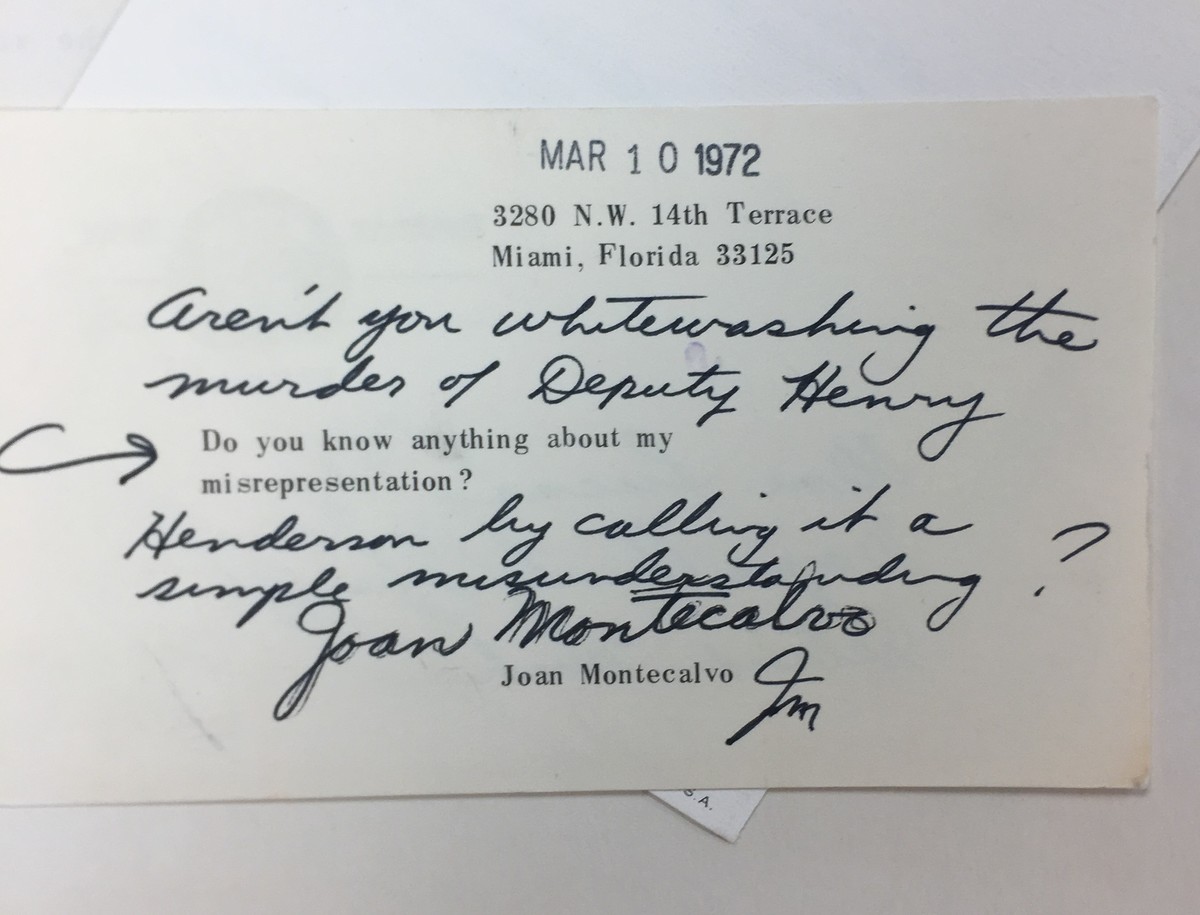 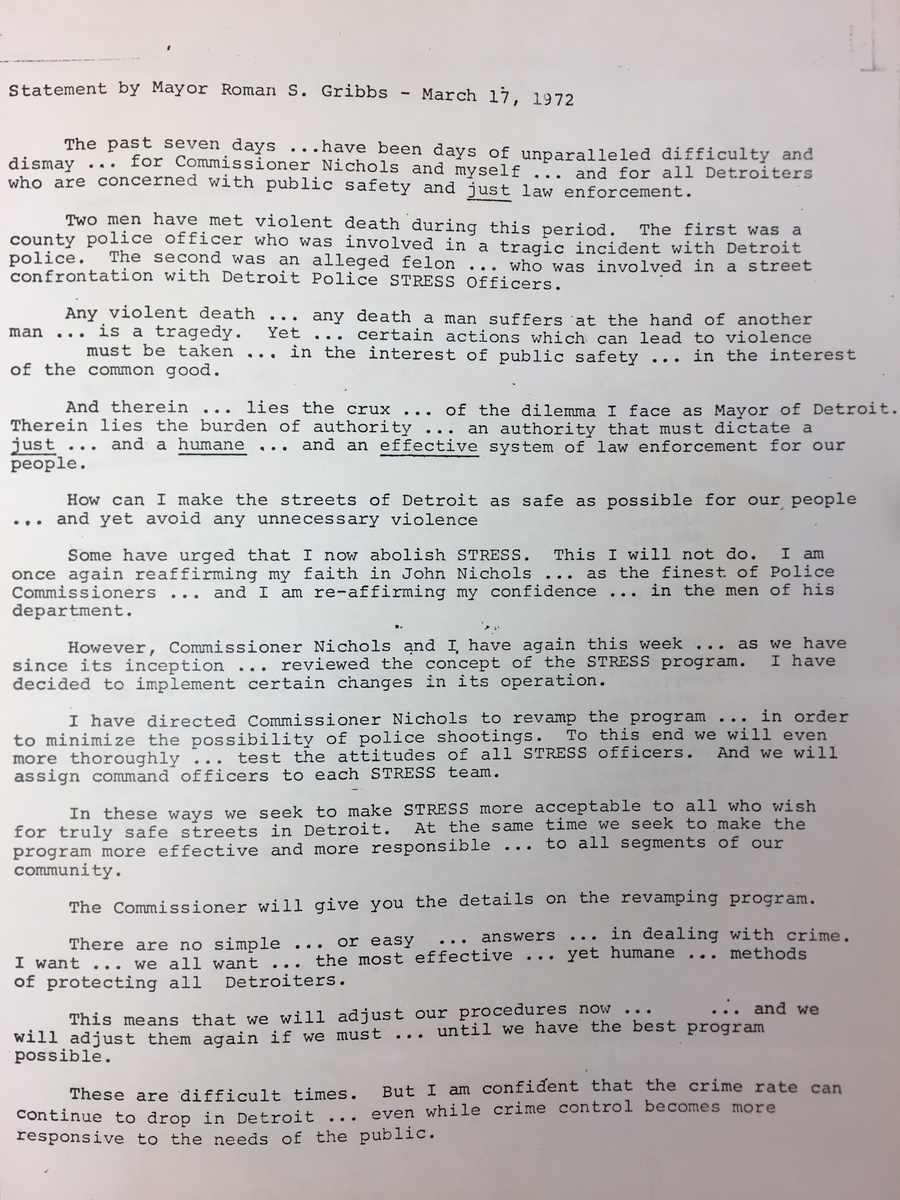 Roman Gribbs Continues His Support for STRESS After the Massacre

The Detroit community was outraged by the Rochester Massacre. A number of the more moderate African American organizations, like the NAACP and the Detroit Urban League, changed their original stance and issued statements supporting the abolition of STRESS following this incident. More radical organizations that had consistently called for the end of STRESS  increased their demands and pressure against the unit.  Overall, the African American community was united in their protests against the abuses of the DPD, and in particular STRESS. The Guardians of Michigan, an organization of Black police officers, called for Nichols to "IMMEDIATELY DISBAND THE STRESS MURDER SQUAD" by 4 pm on the day of the Rochester Massacre. The Rochester Massacre, as the "Detroit Under STRESS" pamphlet labeled it, was a turning point in building opposition to STRESS and police brutality in Detroit. 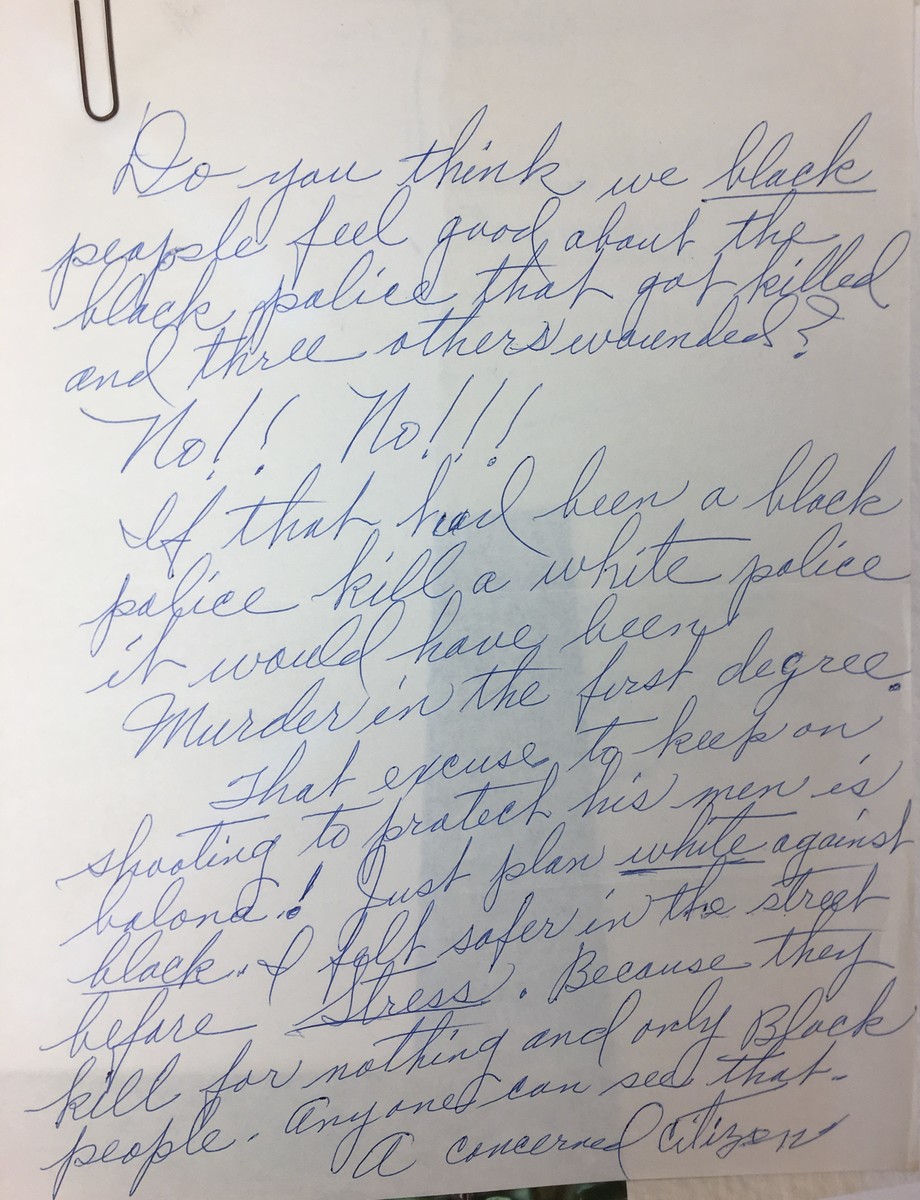 Letter from "A Concerned Citizen" to William Lucas 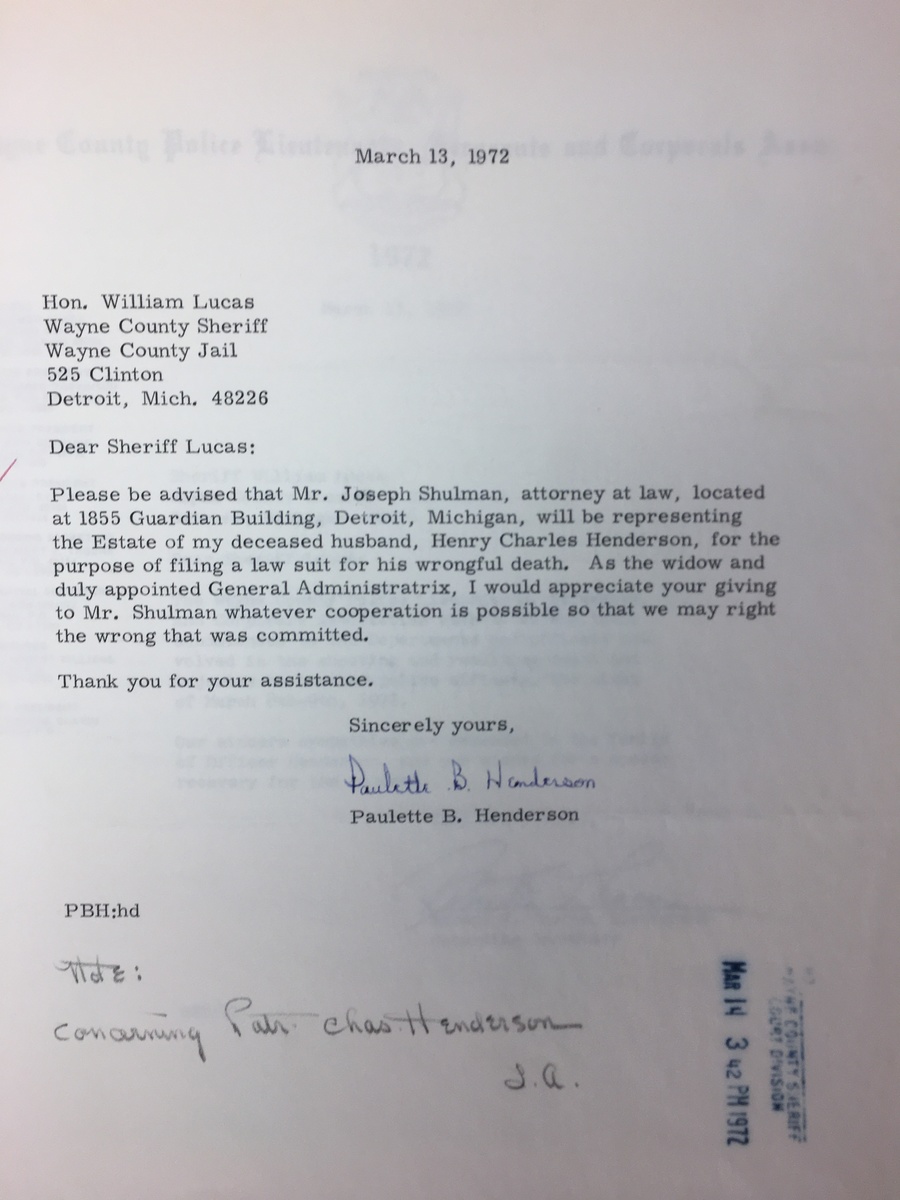 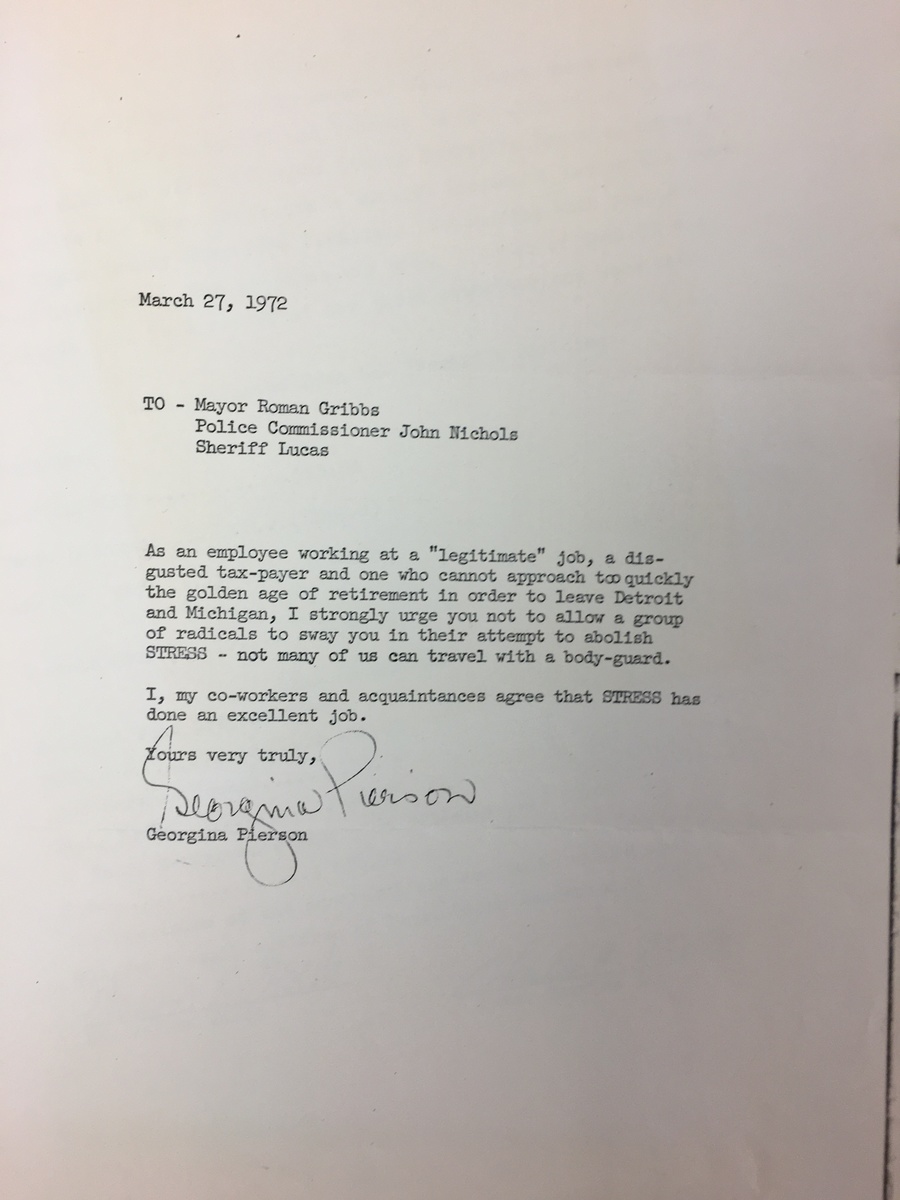 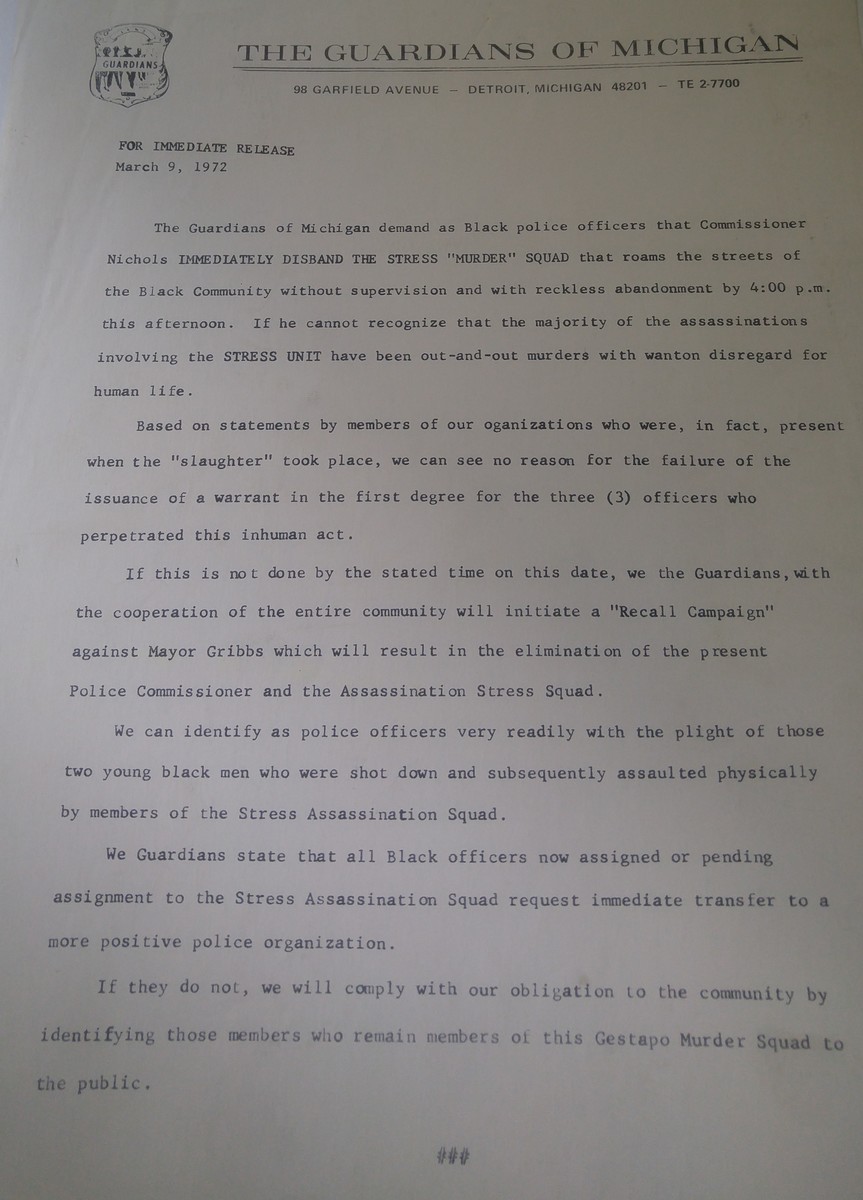 Additional for this page

Urban League March 1972: reform or abolish.  Kornegay: "muggers should be arrested for the crimes they commit, but they should not be killed for them" (this document is below right but probably also goes on Rochester page) 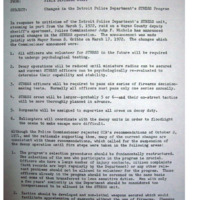 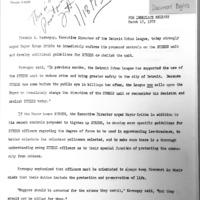