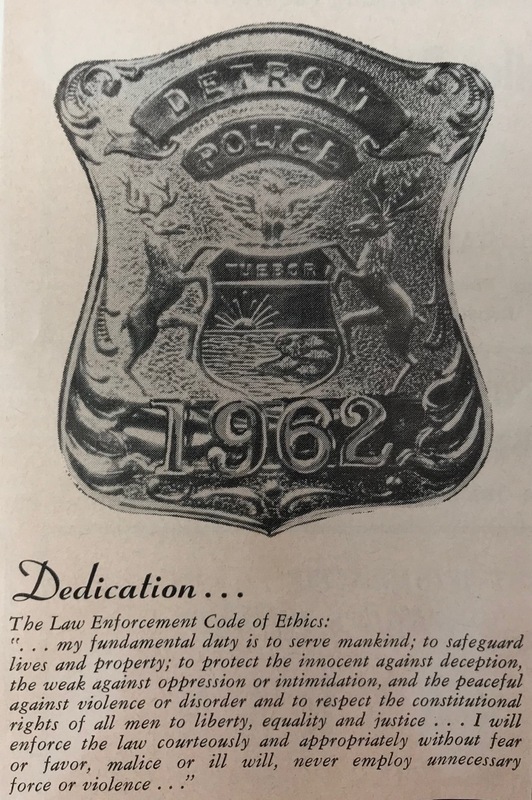 During the 1950s and early 1960s, the civil rights movement challenged police brutality and other forms of racial segregation and discrimination in the urban North, alongside the more familiar story about the nonviolent resistance to the Jim Crow system in the American South. In Detroit, as in metropolitan areas across the nation, public and private discrimination against African Americans operated through a deeply segregated housing market, segregated public schools, unjust hiring practices, and racist policing practices.

Police brutality against African Americans in Detroit and other large cities in the Jim Crow North was systemic and rooted in larger polices of white supremacy and racial control, including the use of law enforcement to defend the color line, as this section shows in detail. The Detroit Police Department (DPD) often operated outside of the law, including through mass racial profiling and illegal policies of investigative arrests, and fiercely resisted civil rights demands for a civilian review board to investigate police brutality. The DPD also illegally placed the NAACP and other civil rights and labor organizations under political surveillance through its so-called Red Squad, another parallel to the Jim Crow South that has received insufficient attention.

Detroit: A Segregated City in Transition

The DPD policed a Jim Crow northern city that was racially segregated by official policies. Between the 1930s and the 1950s, the federal government worked with local governments, and banks and other private institutions, to institute redlining to maintain racially segregated neighborhoods in cities throughout the nation. (Click here to view the Detroit redlining map). White homeowners also enforced the color line with violence. In 1942, a white neighborhood in Detroit rioted to prevent the integration of a federal housing project built for wartime workers, and the Detroit Housing Commission responded by promising that future projects would remain segregated and "not change the racial pattern of a neighborhood." Racial tensions over housing and jobs led to the 1943 race riot in Detroit, where white mobs and police officers attacked black residents, the U.S. Army occupied the city, and at least 25 African Americans and 9 white people died. In 1949, a segregationist Republican, Albert Cobo, was elected mayor of Detroit on a platform promising to stop "Negro invasions" of white neighborhoods, and white violence against housing integration continued throughout the decade. In 1964, two-thirds of the city's white voters approved a Home Owners' Rights Ordinance that guaranteed the right of private individuals to discriminate on the basis of race in the sale and rental of property (a court ruled this unconstitutional). 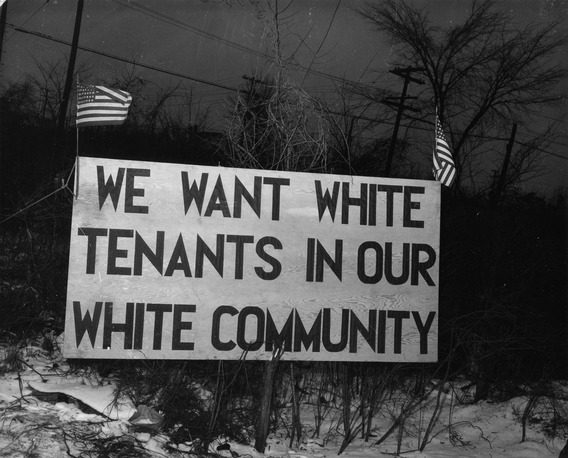 In 1942, an all-white neighborhood in Detroit rioted to prevent African Americans from moving into the Sojourner Truth housing project. The Detroit Housing Commission promised to keep future projects segregated. 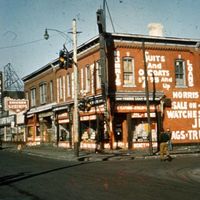 During the 1940s and early 1950s, more than 99 percent of new single-family homes built in Detroit and its suburbs, all constructed with federal mortgage subsidies, were explicitly restricted to whites only. The African American population in the city boomed during and after World War II, increasing from 149,119 people in 1940 to 482,223 by 1960, and expanding from one-tenth to almost one-third of the city's residents. Until the 1950s, the segregated housing market confined most of Detroit’s African American population to an area called Black Bottom and the adjacent neighborhood of Paradise Valley. These areas contained a vibrant black business district and thriving cultural institutions, as well as illicit sectors such as gambling that operated through rampant police corruption. The city of Detroit, using federal highway and urban renewal funding, all but demolished these African American neighborhoods in the early 1960s, setting off a chain reaction of racial violence by displacing African Americans into white areas.

During the 1950s, even before urban renewal, black population growth led to the racial transition of formerly all-white neighborhoods to the east and west of Black Bottom, a contested process that brought white homeowner violence and constant police harassment of African Americans along the shifting color line. View the racial transition of nighborhoods in the city of Detroit through the maps below (green = black population; blue = white population). 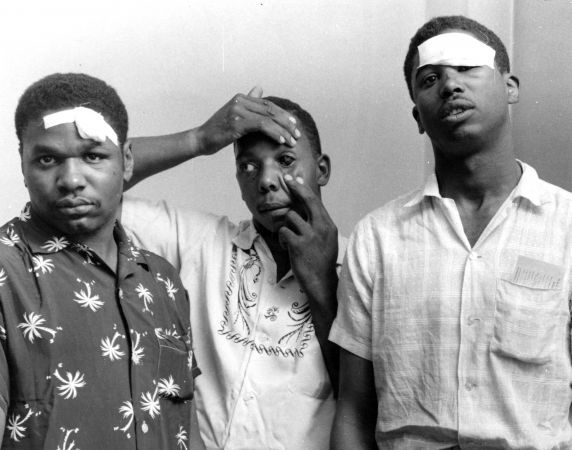 In 1958, the NAACP's magazine, The Crisis, published an expose about investigative arrests and police brutality featuring Detroit as the main example of illegal and unconstitutional policing in the urban North. The white mayor and police commissioner denied the existence of any problems of racial discrimination, police brutality, and abuses of power by the DPD. Traditional civil rights organizations--the Detroit chapter of the NAACP, the Detroit Urban League, and the Detroit branch of the American Civil Liberties Union--led the city's police reform movement in the 1950s and early 1960s, as the pages in this section reveal. These groups sought to make police brutality and misconduct visible (photo on right) and demanded a civilian review board to oversee the police department. They also called for better training of police officers and for the DPD to hire more African Americans to reflect the racial population of the city. Very little changed.

Then the DPD's "crash" program in December 1960 and January 1961 resulted in the mass arrest of 1,500 African American males and galvanized a massive backlash by civil rights groups and African American voters. A white liberal, Jerome Cavanagh, was elected mayor in 1961 on a platform that included the promise of police reform. Cavanagh appointed George Edwards, a white progressive, as the DPD commissioner to improve police-community relations with Black Detroit. Edwards promoted fairer hiring practices and human relations training for police officrs. He and Cavanagh faced growing criticism from white conservatives, including from within the DPD, who warned that crime would increase if the police became too sensitive to civil rights. Edwards and Cavanagh opposed a civilian review board and other more substantive changes to address police brutality against African American citizens. Then they faced the greatest crisis since the crash program, when a white officer shot and killed a black woman, Cynthia Scott, in the summer of 1963. 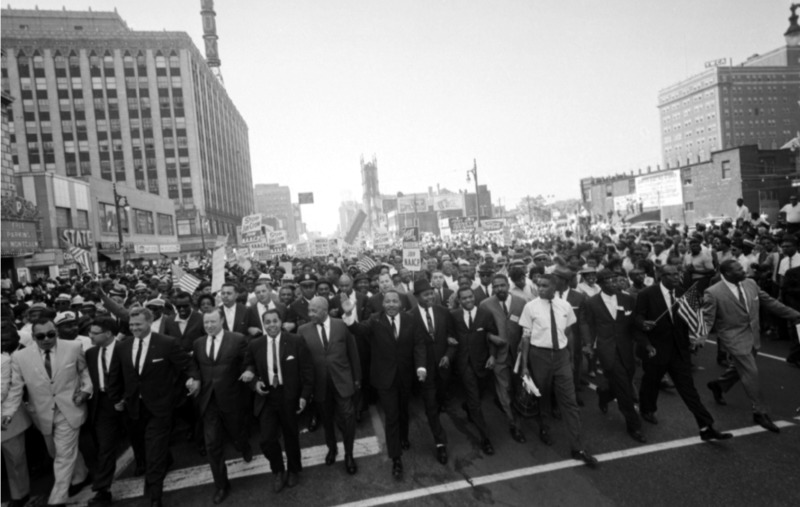 The massive Walk for Freedom in Detroit, June 23, 1963, came 12 days before the police killing of Cynthia Scott

A Tale of Two Sides of the City

Detroit's history between 1957 and 1963 was a time of contradictions. For white liberals and many outsiders, Detroit seemed to have become an exemplary city for police-community relations, with a progressive mayor and police commissioner and a biracial Commission on Community Relations. On June 23, 1963, local civil rights groups organized one of the largest mass demonstrations in American history, the Walk for Freedom, with Rev. Martin Luther King, Jr., leading the march down Woodward Avenue. King praised the DPD for ensuring the safety of the marchers and contrasted the police in Detroit with the brutal law enforcement defending segregation in the South.

The reality was much different. Twelve days later, the murder of Cynthia Scott by a DPD officer placed competing visions of Detroit into sharp relief. Thousands of African Americans protested in the streets and accused the criminal justice system and Cavanagh administration of a cover-up. While mainstream groups such as the NAACP criticized the police department, the energy in the streets came from a newer and more militant civil rights coalition that rejected the traditional politics of negotiating with white liberals and instead demanded radical change through direct-action protests.

The exoneration of the police officer, despite overwhelming evidence, was business as usual and was the real face of policing in Detroit. The Detroit Police Department policed itself, found almost all civilian allegations of misconduct and brutality to be unjustified or unproven, and almost never punished officers for crimes of violence against African Americans. This section documents the history of police brutality and misconduct between 1957 and 1963 and the mobilization of civil rights activists to expose and curtail the DPD's systemic abuses of power.

Thomas J. Sugrue, The Origins of the Urban Crisis: Race and Inequality in Postwar Detroit (1996)

Thomas J. Sugrue, Sweet Land of Liberty: The Forgotten Struggle for Civil Rights in the North (2008)