On April 26, 1973, investigators within the Detroit Police Department requested indictments against 22 DPD officers for their involvement in heroin trafficking, alleging that these officers were protecting particular drug dealers by tipping them off to raids and destroying evidence, supplying dealers with drugs confiscated from other raids, and extorting and robbing dealers for tens of thousands of dollars. On May 13, 1973, 10 officers from the Detroit Police Department's 10th precinct, and 16 civilians, were indicted for involvement in drug trafficking. Sixteen men, nine police officers and seven civilians, were charged with conspiracy to deliver narcotics and obstruction of justice.  Of the officers involced, only one was found guilty of drug trafficking, while three were found guilty of obstruction. On December 20th, 1975, officer Robert Mitchell was found guilty of conspiracy to deliver narcotics. Officers Mitchell, Rudy Davis, Richard Herold were found guilty of conspiracy to obstruct. 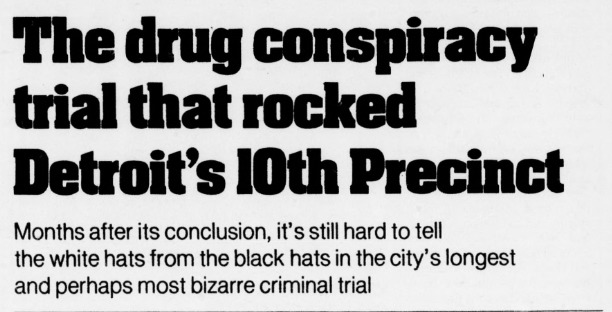 Article on the drug problem in Detroit and the Detroit Police Department's involvement in drug trafficking from Groundwork, the publication of the leftist Detroit organizers From the Ground Up.

Wiley Reed, who worked for dealer Milton Battle in 1971, testified that they used local police payoffs to protect drug houses. Reed said he personally delivered payoffs to Rudy Davis, indluding a diamond ring with the initials "RD." The maket was so open that one block at 12th and Pingree Street contained 27 drug houses. At the same time, Red McNeal said he paid off policemen so frequently that he was only arrested once after 37 raids on his drug operation.

Officers protected certain dealers in exchange for information about other dealers. Peaches Miles testified about her arrangement with Robert Mitchell. She said that she would give Mitchell information about certain dope-houses to raid in exchange for protection, a supply of heroin raided for other dealers, and her own protected places to sell drugs.  She turned over a share of her profits to Mitchell. In 1972, Harold Chapman and Carolyn Boydtestified that they mde $100,000 selling cocaine in the 10th precint. Half of that money went to 10th precinct sargeant Rudy Davis. Prosecutor Gibbs said that drug traffic in the 10th Precinct had been conducted "so openly and blatantly that it would have been 'impossible without the express and intended cooperation' of the police on trial."

George Bennett, an African American DPD Lieutenant that headed the investigation into the 10th Precinct, faced resistance from white police officers . In 1971, he sued the police department accusing that he was a victim of racism from the DPD.  He lost the suit, but was nevertheless chosen by John Nichols to investigate the 10th Precinct in late 1971. Almost immidiately as indictments started to emerge, officers in the DPD claimed Bennett was a "bitter and vengeful black who had framed the white officers."  Patrolman Richard Herold testified that George Bennett, the DPD investigator of the 10th precinct drug conspiracy, offered him $40,000 to $50,000 to kill DPD officers Rudy Davis, Robert Mitchell, or even comissioner John Nichols. DPD officer Craig Pollard also testified that Bennett asked him to plant drugs on Davis and Mitchell. Bennett claimed that he and his unit faced constant harassment. He said that someone within the DPD had put out a $20,000 bounty on his life. 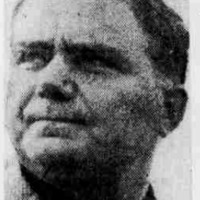 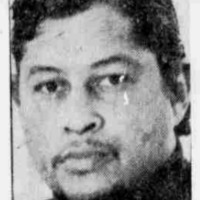 The trials were marred with violence, corruption, and intimidation. Two weeks after writing major exposes on corruption in the 10th Precinct, Detroit Free Press journalist Howard Kohn was kidnapped by Sydell Carter. Carter mnearly killed Kohn after struggling over a gun. After this event, Kohn was fired by the Free Press. The Ann Arbor Sun accused the Free Press of killing the Pingree Street story. After Kohn was fired, the Sun wrote, the Free Press ran fewer stories on heroin and buried them deep in the newspaper. Two key witnessed were murdered before they had a chance to testify.  According to police, Geroge Dudley was killed in his apartment on November 22, 1975 during an argument and a robbery. George Hall and his female compainion Bertha McClain were shot to death as they entered their vehicle on June 8, 1973. 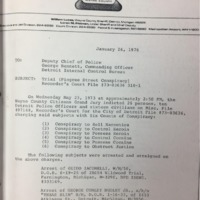 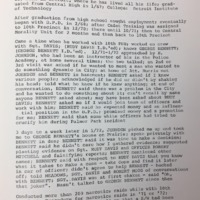 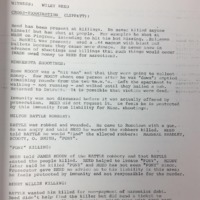 The Pingree conspiracy exaplains why Detroiters saw the drug issue in Detroit as partly an issue of police corruption. After the police indictments on April 26, 1973, radical Detroit newspaper Groundwork demanded that "all corrupt police officials, prosecutors, judges and other politicians be investigated and indicted." The 10th precinct indictments, to them, were just a first step, and to root out police corruption in Detroit requires dilligent commmunity activism. Dismayed with the DPD's failure to quell drug issues that Detroiters adamantly complained about, some like Hayward Brown, Mark Bethune, and John Boyd took matters into their own hands, and attempted vigilante justice against drug dealers.  The rampant corruption in the DPD evidenced by the Pingree Street conspiracy explains why Detroiters would feel the need take stopping drug dealers into their own hands.

George Bennett after the Trial concluded

possible to add from other page

Despite the appearance of justice and protection for Black police officers, officers were still subject to threats from their white colleagues for revealing the truth about wrongdoings on behalf of other officers within DPD. In 1973, an African American DPD Lieutenant's investigation revealed that 12 officers were involved in narcotics trafficking. The incident was known as the Pingree Street Conspiracy. Following Lieutenant George Bennett's findings, he received multiple threats against his life. One such threat included, "there is a contract out for the man's life for $20,000 and a plane ticket for any place (the killer) wants to go."

In response to threats such as this, Liutenant Bennett asked Commissioner Nichols to provide him with increased protection, to which Nichols obliged. However, The Guardians of Michigan and Concerned Police Officers for Equal Justice, two African American organizations that worked to promote African American police officers' rights, questioned whether DPD could be trusted to protect a corruption fighter. Further, they had reason to believe that this threat came from someone within the police department.  A year into his investigation, Liutenant Bennett was forced to move his investigation from police headquarters to the office of the State Attorney General for fears of high level police officials meddling in his investigation. Through Lieutenant Bennett's investigation, Police Inspectors told him to end his investigation once names of white officers were uncovered as a part of the narcotics ring. This led Patrolman Ira Samuels, head of the Guardians of Michigan, to presume that Police Inspectors were also involved in the illegal narcotics trafficking. Unable to trust DPD itself, the Guardians of Michigan gave 24 hour protection to Lieutenant Bennett, and the resources and backing to continue his narcotics probe.