Fighting STRESS in the Courtroom

On April 7, 1972, the Labor Defense Coalition, the families of some STRESS victims, and a broad coalition of political organizations in the black community, including the Guardians of Michigan, the Detroit NAACP, and the Detroit ACLU sued Mayor Roman Gribbs, Police Commissioner John Nichols, and Prosecutor William Cahalan. The LDC and the Guardians of Michigan announced their lawsuit plan on March 23, along with a petition drive against STRESS (Detroit Free Press, Drive Set to Abolish STRESS). The March 9 Rochester Street Massacre mobilized existing anti-STRESS activists, pushing them more staunchly against STRESS,  as well as drew groups that had previously supported STRESS to the anti-STRESS side. This lawsuit argued that STRESS provoked violence, and STRESS officers were a “murder squad” against the people of Detroit. In a 1972 Fifth Estate article, attorney Justin Ravitz said, "We shall prove that STRESS not only kills, but that STRESS murders innocent people... we shall legally prove a basis that would warrant and require the criminal prosecution of numerous STRESS officers for the criminal offense of murder." The suit focused on three particular STRESS abuses: the killing of Clarence Manning, the killing of Neil Bray, and the shooting and beating of John Simmons and Larry Parker, as well as two categories of STRESS killings, which attorneys called the "diminutive drunk killings" and the "Charlotte-Woodward area killings." While some received monetary settlements from the city of Detroit after this lawsuit, no STRESS officer was ever convicted on criminal charges for their actions, and the lawsuit did not end STRESS.  Still, this lawsuit provided clear evidence of the brutality and the lies of officers to cover up their brutality within STRESS and the DPD. 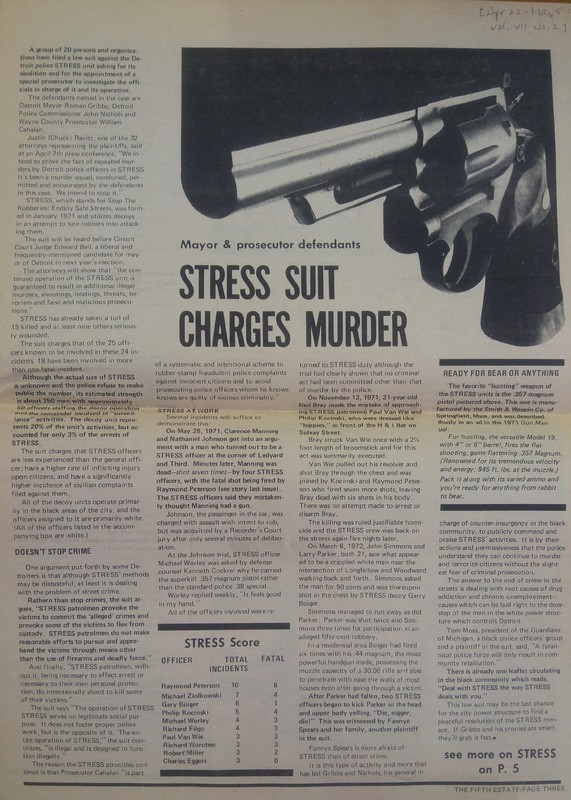 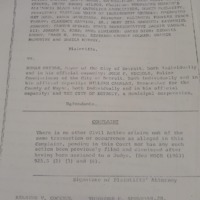 Complaint of the Plaintiffs in the lawsuit agsint STRESS. This document lists the STRESS incidents that the plaintiffs used as evidence against STRESS and the DPD (click to view the full complaint). 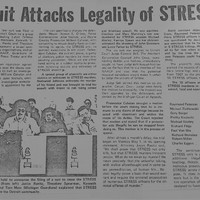 An article on the STRESS suit from The Fifth Estate, a radical leftist newspaper in Detroit that was involved in activism agsint STRESS

The STRESS killing of Clarence Manning showed how officers created violence by blitzing and shooting unarmed civilians without cause and without even identifying themselves as police officers. Clarence Manning and Nathaniel Johnson were driving down Ledyard St. when they stopped near the Edison Garage and Manning exited the vehicle to urinate. The two were on their way to the Colombia Bar to pick up Johnson's wife and mother-in-law. Manning was approached by undercover STRESS officer Michael Worley, disguised as a "hippy," who uttered something to Manning that angered him. Manning took a few steps toward Worley who, without identifying himself as a police officer, opened fire, striking him once in the upper left arm. Manning moved to the back of the vehicle to avoid the gunfire. Worley and two other officers, Marv Johnson and Raymond Peterson, converged on Manning, who were all claimed to fire at least two shots at Manning. Manning was shot seven times with the fatal shot coming from Peterson. One of these shots came from five inches away. Johnson and Manning did not know they were police officers. From Johnson's perspective, unknown armed men just murdered his friend for no reason and were going to kill him next. Johnson, who did not know how to drive, slid to the driver's seat and drove away, side-swiping a parked car. Officers fired shots at the car as he drove away. He met with his wife and mother-in-law at the Colombia Bar, nervous and crying, and told them what happened. They took a cab back to the scene of the shooting and found a patrol car on the way there. Johnson flagged down the car and told them men shot his friend. The officers arrested him and charged him with armed robbery. Four officers fired a total of 18 shots at the unarmed men. At Johnson's trial, no weapons were presented as evidence and he was found innocent. 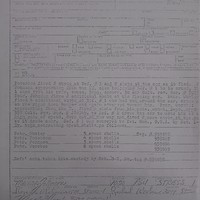 Clarence Manning autopsy, page one, which shows that STRESS fired 18 shots during the incident. 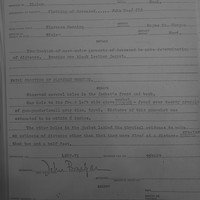 Autopsy of Clarence Manning, page two,  which shows that the bullet that killed him was fired from five inches away 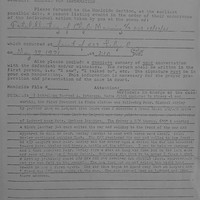 Statement from STRESS officer Raymond Peterson the night he shot and killed Manning.

On September 21, 1971, STRESS officer Robert Miller, along with Raymond Peterson, David Siebert, Anthony Golicz, shot and killed Donald Saunders. While dressed as a decoy, Miller saw Saunders walking down Monroe St. Saunders asked Miller for 20 cents for bus fare. Miller testified that he told Saunders that he had $20, but not 20 cents. Then Miller claimed, Saunders drew a knife, grabbed his wallet, and knocked him to the ground. After, Miler drew his weapon, identified himself as police, ordered Saunders to halt, and pursued him along with STRESS officer Siebert. Miller testified that the two officers fired five shots at Saunders, hitting him in the back and killing him as he fled. Testimony from the Wayne County Medical Examiner revealed that Miller's testimony was a lie. Based on Saunders' gunshot wounds, he could not have been shot in the back. The shot that killed Saunders hit him from the front in the chest. Saunders was also shot in the upper rear right thigh. Both of these gunshot wounds showed abrasion collars, meaning that Miller shot Saunders from point blank range. Either Miller shot Saunders in the chest before he fled, then again in the leg after he fell, or Miller shot Saunders in the leg as he fled, then executed him with a gunshot to the chest as he laid on the ground. Miller also lied about Saunders's size. The night he killed Saunders, Miller filed in his police report that Saunders was 5'10", 160 pounds. In fact, Saunders was only 5'7", 122 pounds. With his frame, he could not have knocked down Miller. Miller also claimed that he did not think Saunders was drunk, but the medical examiner testified that his blood alcohol content was .32. As the medical examiner put it, Saunders was "very, very drunk... he would have had difficulty walking or standing, let alone running," and there was no way Saunders could have been coordinated enough to snatch Miller's wallet, knock him down, then run away all in a split-second. This testimony shows that the Detroit Police Department killed a poor, drunk black man for no reason.

Testimony of STRESS officer Robert Miller and the Wayne County Medical Examiner. The medical examiner proved that Miller's testimony was a lie. 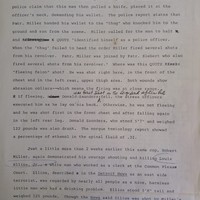 LDC document which shows the DPD lied about the Saunders shooting, as the autopsy showed Saunders was shot in the chest at close range.

The deaths of Horace Fennick and Howard Moore exemplify how STRESS created violence out of non-criminal acts. The testimony of Kenneth Hicks, the man who STRESS officers shot during the altercation, but survived, testified that on the night of July 5, 1971, the three asked decoy officer Michael Ziolkowski for a quarter so they could buy a drink. Ziolkowski claimed that the men, one of them armed with a knife, tried to rob him. However, Hicks testified that Ziolkowski, unprovoked, backed away from the men, drew his pistol and began firing. None of the men were armed, and none of the men attempted to rob Ziolkowski. The testimony of Robert Wren, Johnny Henry Lee, and Joseph Wormly,  civilian witnesses, corroborated Hicks' testimony. All of these witnesses verified that the men shot by STRESS were unarmed and did nothing to provoke the shooting. All of these witnesses said that they saw the officer just step back and start shooting for no apparent reason. Fennick and Moore fled into an alley, where they were met by STRESS officers Raymond Peterson and Phillip Kocinski. The two men were shot five times and were killed by the officers.  These men committed no crimes, but they were killed because an officer shot at them and they instinctually fled. The Detroit Police Department then justified shooting them because they were fleeing. Joseph Wormly also gave testimony that connects to a STRESS shooting that occurred just a few months later. 20 minutes before Fennick, Moore, and Hicks were shot, Wormly saw the same STRESS officers hitting on a cross-dressing person who went by Barbara, but whose legal name was James Henderson. Wormly said that Henderson said that the officers "had a lot of nerve trying to hit on her," because he knew that they were officers based on a prior incident. Months later, STRESS officers would kill Henderson. 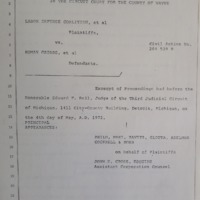 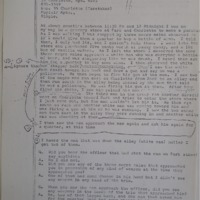 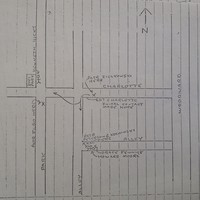 Map of the Fennick, Moore, and Hicks shooting 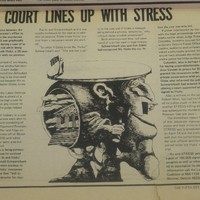 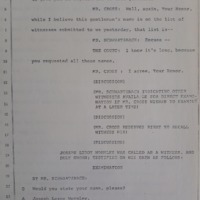 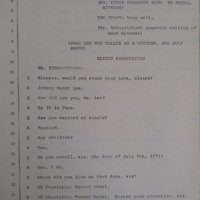 James Henderson's death may have been an assassination of a witness, and a personal murder carried out by Raymond Peterson. On May 11, 1971, Peterson shot and killed Herbert Childress. James Henderson lured Peterson to a hotel room at 35 Charlotte, offering to "do some business" with him. When Peterson entered the hotel room, he found two men, one of them Childress, undressed on the bed. Henderson asked Peterson how much he would pay. When Peterson said "forget it" and tried to leave.  Afterward, Childress entered the room, wielding a knife, and tried to rob Peterson. Peterson shot and killed Childress. In the police report, James Henderson listed himself as willing to testify that Childress was trying to rob Peterson. Four months later, Peterson and other STRESS officers killed Henderson in what one witness testimony showed was a targeted killing According to testimony by Rawley McDuffey, desk clerk at the Neal Hotel during the shooting, STRESS officers dragged Henderson into the hotel, beat him, then said "run n*****" to him and shot him as he fled. McDuffey witnessed STRESS officers beat and kill Henderson in the Neal Hotel lobby. STRESS officers claimed that McDuffy was in on the alleged robbery with Henderson. However, McDuffy said that he had locked himself in a room because he was not sure if they were police officers. He told the officers where to find the key to unlock the door, then he hid under a bed. After unlocking the door, Mcduffy crawled out from under the bed, and an officer slammed him up against a wall, cuffed him, and another officer hit him on the head with his gun. This officer then started punching McDuffy in the stomach and face. The officers dragged McDuffy into an office area, kicked him down, and all started beating on him. One officer put a gun to his head and said, "I'm going to kill your ass too." An officer then knocked him unconscious. McDuffy awoke in the Wayne County Jail. Detectives in the jail attempted to pin Henderson's death on him; they told McDuffy "you killed this guy." The detectives lied to him, as McDuffy was only formally charged with larceny from a person. McDuffy was given a $500 bond for a crime he did not commit, He eventually pled guilty to disorderly person, though he did not believe himself to be guilty. He just wanted to escape the jail. 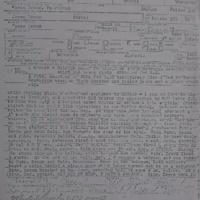 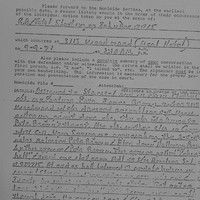 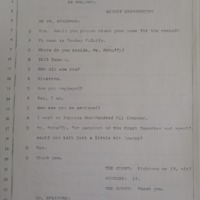 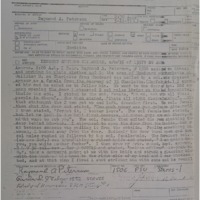 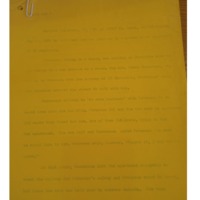 An Incomplete Picture of Police Abuse in Detroit

The individuals represented in the STRESS trials by no means encompass all persons that experienced harassment and violence from STRESS officers. Attorneys chose to represent the individuals for whom there was some sort of legal evidence for police wrongdoing. Ricardo Buck and Craig Mitchell, two teenagers killed by STRESS officer Richard Worobec in 1971, were not included in this lawsuit for the reason that attorneys did not feel they had enough evidence to win their case. Though the Labor Defense Coalition was involved in political action after their deaths and a "state of emergency" committee formed in Detroit among black community activists around their deaths, they did not legally represent the two. 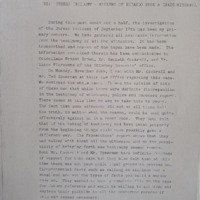 While the STRESS lawsuit did not result in a criminal conviction and it did not end STRESS, it shed light on the outrageous violence and brutality of STRESS. While this could never make up for the pain these families have suffered through at the hands of STRESS, some of those named in the suit got some degree of financial justice.