Go through Michigan Chronicle Jan 1973 download on folder in laptop

Shootout with STRESS Starts the Manhunt

Hayward Brown, Marcus Clyde Bethune, and John Percy Boyd lived in a community they felt was being ravaged by drug use and drug trafficking. The trio became known in their community as enemies of the drug trade. On December 4, 1972, Brown, Bethune, and Boyd, decide to take vigilante action against a drug dealer in their community. They arrive at the home of John Crawford, a known heroin house, armed, but four STRESS officers, Richard Grapp, Eugene Fuller, Robert Rosenow, and Billy Price, were staking out the home. When Brown, Boyd, and Bethune arrived, Crawford saw them and sped off, and the three men chased him. The STRESS officers followed them. Brown said that while they were following Crawford, the STRESS car forced them to the side of the road. They believed that the STRESS officers were Crawford's henchmen. The STRESS officers claimed that they showed the trio their badges, but Brown said that the officers came at them with guns pulled and firing. A firefight ensued and STRESS officers were wounded. Fearing retaliation from Crawford, the three men abandoned their car and stayed in motels and friends’ homes for a few days. 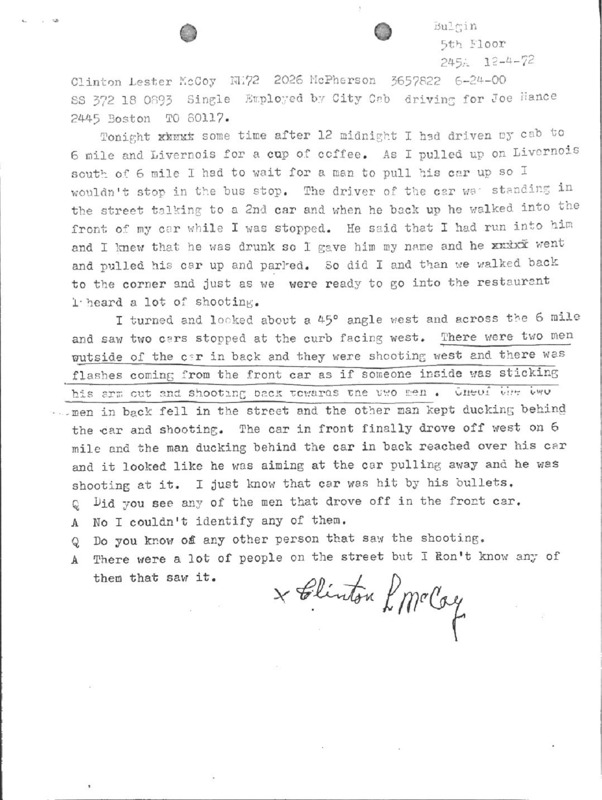 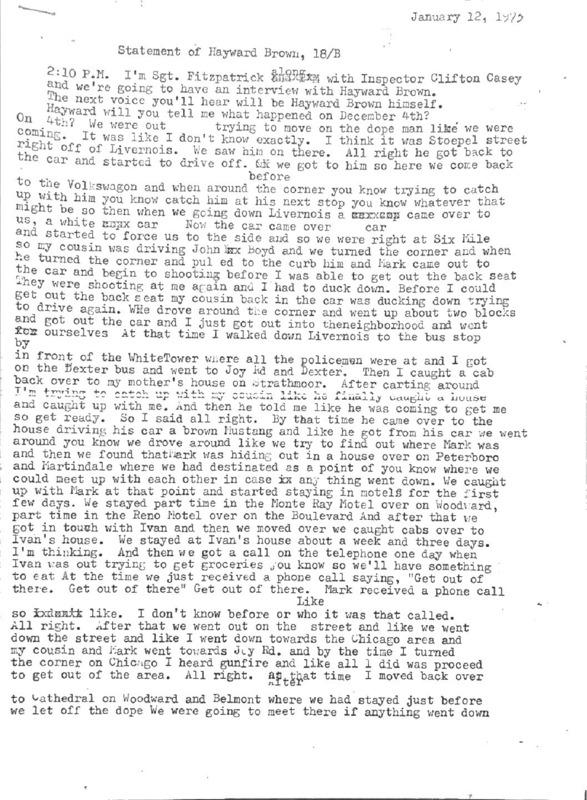 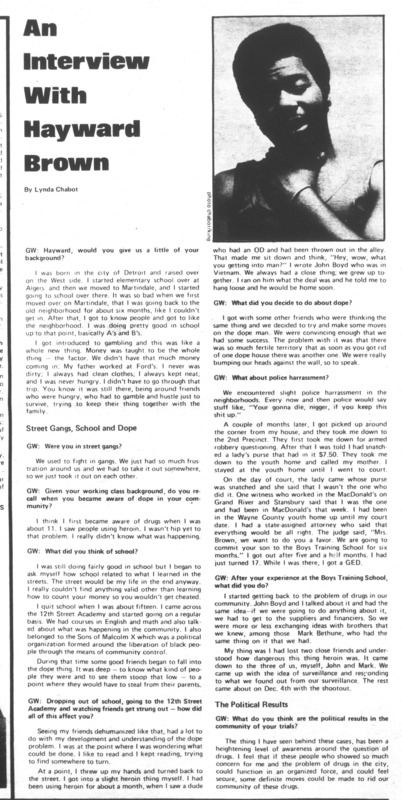 STRESS terrorizes Rev. Leroy Cannon and family during the manhunt

From the day of the shooting to over a month later, the DPD ransacked the Black community with impunity in search of Brown, Bethune, and Boyd. The DPD arrested at least 27 people in connection to the three men. On December 15, officers shot and killed Durwood Forshee while they searched a home. On December 8, officers sexually harassed Patricia Ragland in front of her fiance Carl Ingram; they forced her to undress while they searched their home. On December 21, 1972, a  police officer sexually assaulted two women while they searched their apartment under the guise of "searching for a weapon." The DPD terrorized any black Detroiter with even the most remote connection to Boyd, Bethune, and Brown.  Their friends and relatives were the biggest police targets. Police officers searched their homes and harassed them almost every day.  The police harassed the friends and family of the wanted men so much that seven of them banded together to sue the Detroit Police Department. On December 15, 1972, Judge Thomas Foley granted a temporary restraining order, forbidding Detroit police officers from harassing these seven people.   By January 10, 1972, the DPD received complaints from at least twenty Detroiters complained about physical abuse, verbal abuse, and property damage when DPD officers searched their homes.

Police Commissioner John Nichols refused to admit any wrongdoing on behalf of police officers during the manhunt. Nadine Brown of the Michigan Chronicle wrote:

"It is even more deplorable that we hear the same old stock statements from [Nichols], when he does reply to queries about questionable activities of police officers, that show a reluctance on his part to even admit the remotest possibility that an officer may be guilty...  It is Iittle wonder that more and more of Detroit's Black citizens are convinced that they are hemmed in between those cops they cannot trust and the criminal who is ripping them off, while people at the top are screaming for law and order."

Dewey Foshee, "everyone is concerned about the policemen that got killed, but no one is saying anything about the way they killed my brother Durwood. He was murdered--by policemen!" (Chronicle 3-3-73)

Foshee was killed in his own home, head of Guardians said the manhunt had a "shoot to kill" order--in Ramparts article 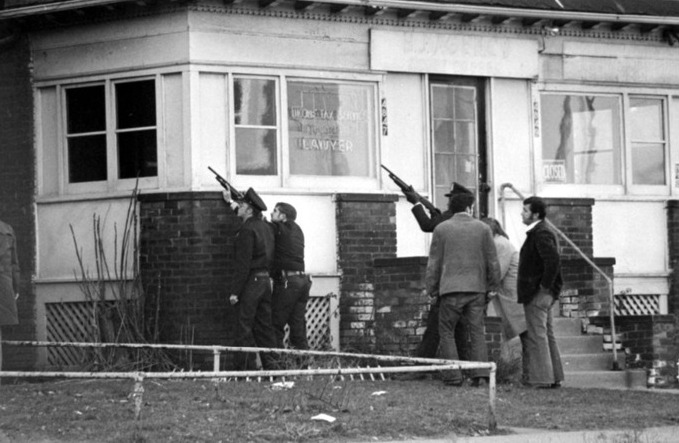 DPD officers in search of Brown, Boyd, and Bethune

The above map shows the location of 20 complaints made about searches of homes by the Detroit Police Department. As the map shows, almost every complaint came from a home that was searched in exclusively black neighborhoods. This is not a full extent of what the DPD did during the manhunt, as these are just the people who formally complained to the DPD. MAny people did not complain to the DPD by name, because that would make them a target for further police harassment. For example, one woman, a student of Wayne County  Community College, was sexually assaulted by a police officer on December 21, 1972.  She told about the event to the Michigan Chronicle, but she did not formally complain to the DPD. Even when someone did complain to the police, the descriptions the DPD gave to these complaints whitewashed the level of abuse perpetrated by the DPD. For example, Michael Brantley complained that the DPD drove him and his family out of his home, pushed him against a tree with a gun to his head, then held him and his wife at a police station for four hours. The DPD classified this complaint as just "harassment." The only reason that there is a more detailed account of Brantley's experience is because he complained at a public hearing on January 11, which was made into a transcript. Officers rarely faced any discipline from the department when a complaint was filed, and no officer was ever convicted of criminal charges for their actions during the manhunt. 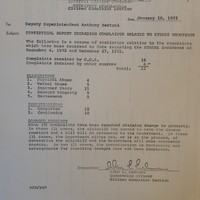 Complaints to the DPD During the Manhunt 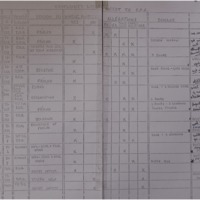 Spreadsheet of DPD Complaints During the Manhunt 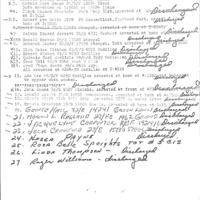 Incomplete Lists of Arrests Made during the Manhunt 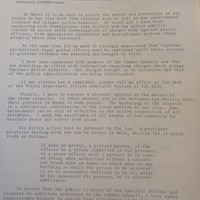 Mayor Gribbs's Press Release on Complaints to the DPD 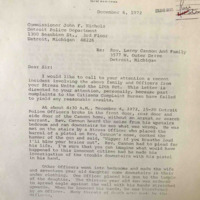 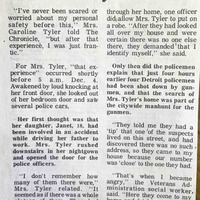 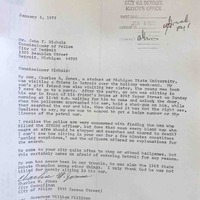 On December 27, 1972, four STRESS officers had a shootout with the three men. They were staking out the apartment that Brown, Bethune, and Boyd were hiding in, and when the three emerged, officer Robert Dooley grabbed Brown as a human shield while he shot at Bethune. Bethune shot Dooley in the face, while someone shot and killed officer Robert Bradford. (Connect to Donald Kimbrough)

Guardians: "hoodlum policemen began a reign of terror upon the honest citizens of the Black community"

hearing transcript next page, maybe move this there

DFP 1-27-73: "We have never quesrioned the basic concept of STRESS as an effective instrument to fight crime" but manhunt "infringed on the rights of innocent people, seriously harming police-community relations", says Nichols is denying abuses even though investigations continue, calls for a STRESS investigation "independent of police control" !!! "for this particular series of events" 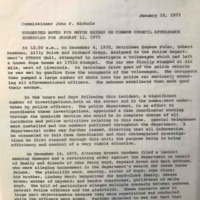 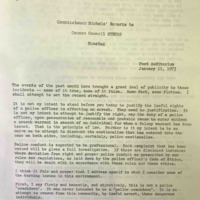 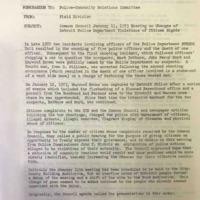 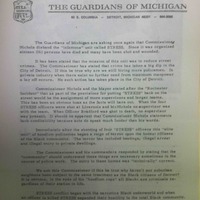 On January 12, 1973, the DPD arrested Hayward Brown. Wayne State University officers Robert Oliphant and Leonard Corsetti located Hayward Brown and fired a shot at him while attempting to arrest him. Brown returned fire, but DPD backup arrived and arrested him. Brown was charged with Seven counts of assault with intent to commit murder and one count of first-degree murder. Wayne County Prosecutor William Cahalan refused to consolidate the charges, and Brown had to stand trial three separate times.

After Brown was captured, the DPD still searched for the other two men. An incident on January 17, 1973, sparked another broad police search of homes. Off-duty Detroit Police Officer James Cooper claimed that around midnight January 17, 1973, he saw a man that looked like John Boyd attempt to break into his home. Cooper claimed he fired a shot at the man and he fled down an alley. That morning, the frontpage headline of the Detroit News detailed the Detroit Police Department's 70-block manhunt based on Cooper's information. The police searched an area near Southfield Freeway and Ford road in the southwest border of Detroit. This neighborhood, according to the 1970 census, was more than 99% white. In stark contrast with the police manhunts that occurred in black neighborhoods, the police did not abuse, shoot, or kill anyone. Officers claimed they only entered a few homes. The search ended at 2:00 AM. 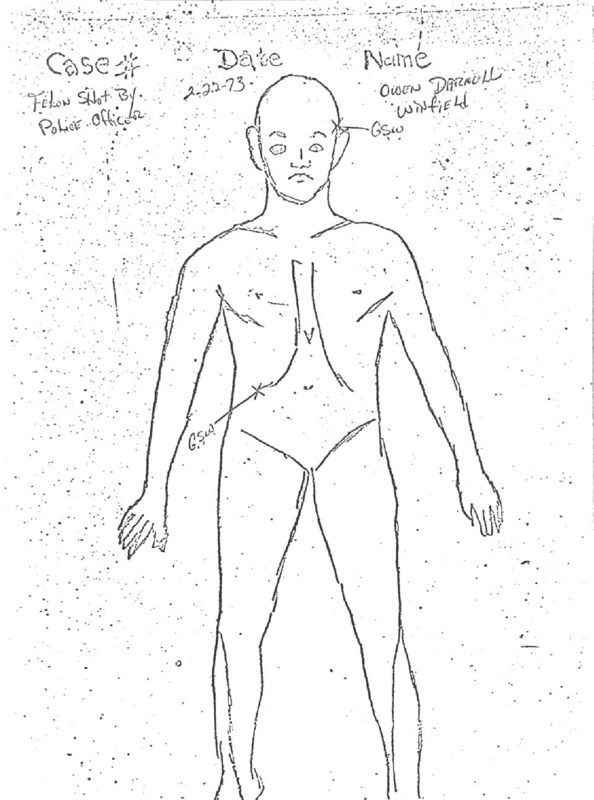 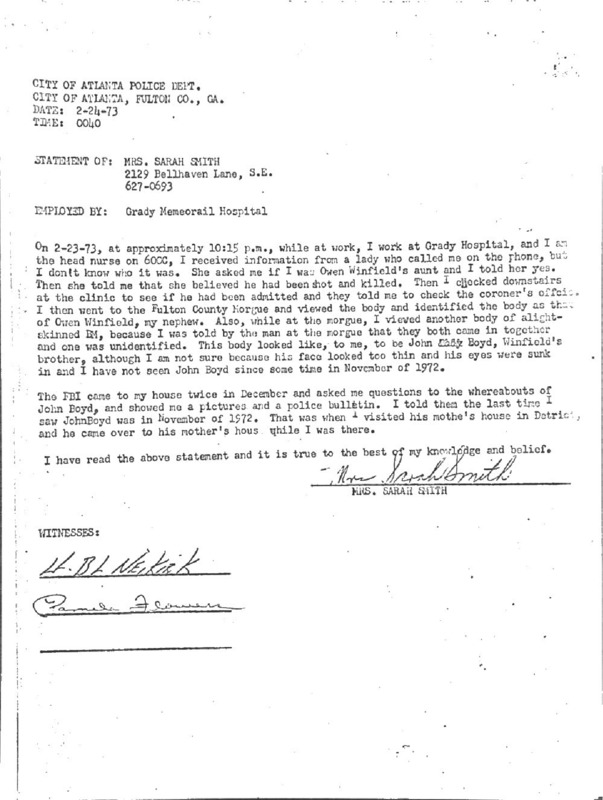 Account of Sarah Smith on Winfield and Boyd's Body 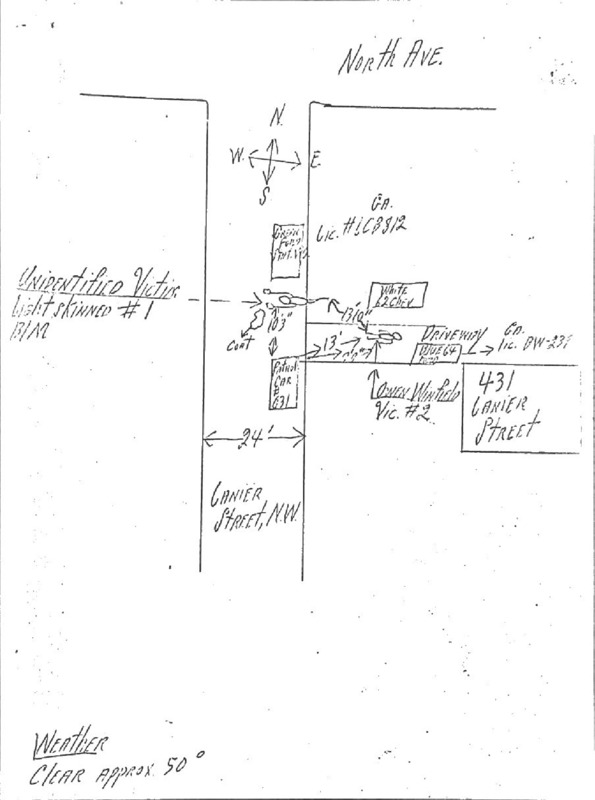 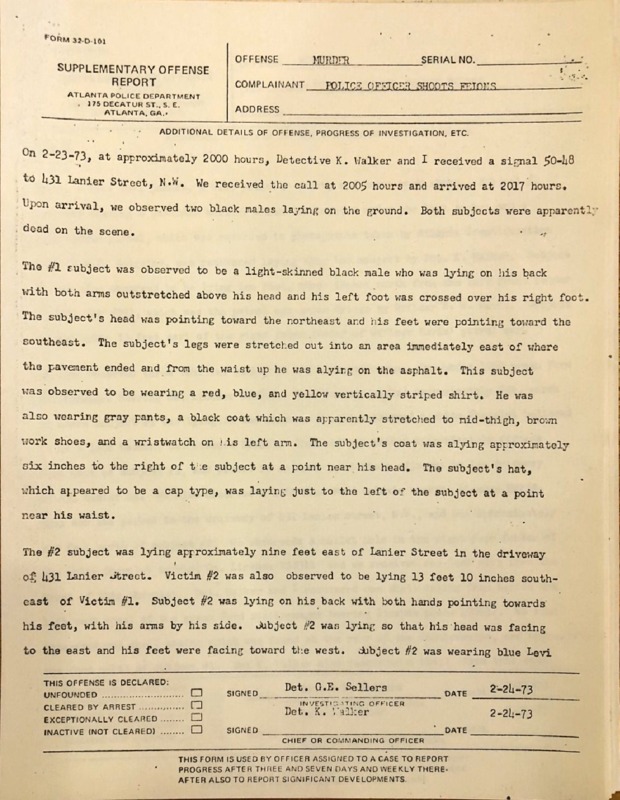 This manhunt was a turning point in anti-STRESS activism. The DPD'd abuses during the manhunt angered Detroit's black community. The manhunt brought even more activism against STRESS.

add photos from Reuther on this page, including Abolish STRESS folder

all this below may go on next page 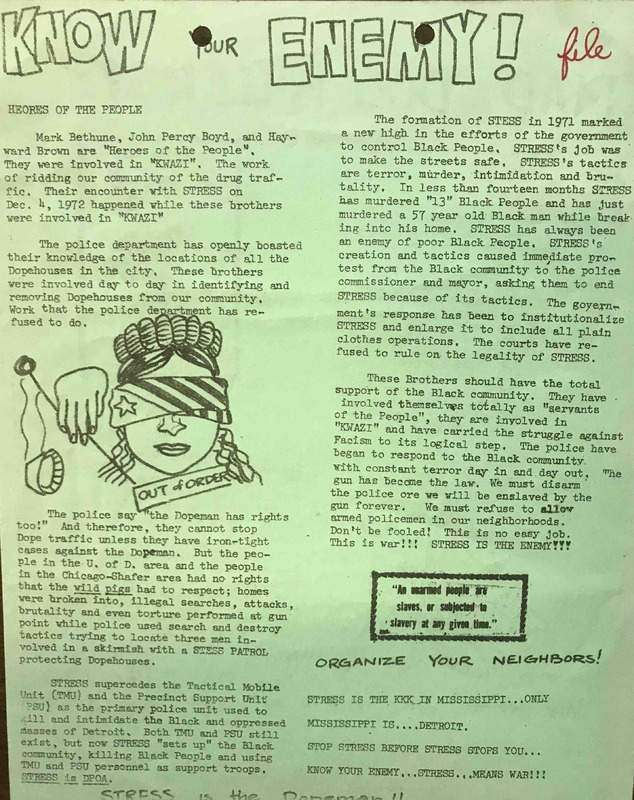 Radical Flyer on the Manhunt 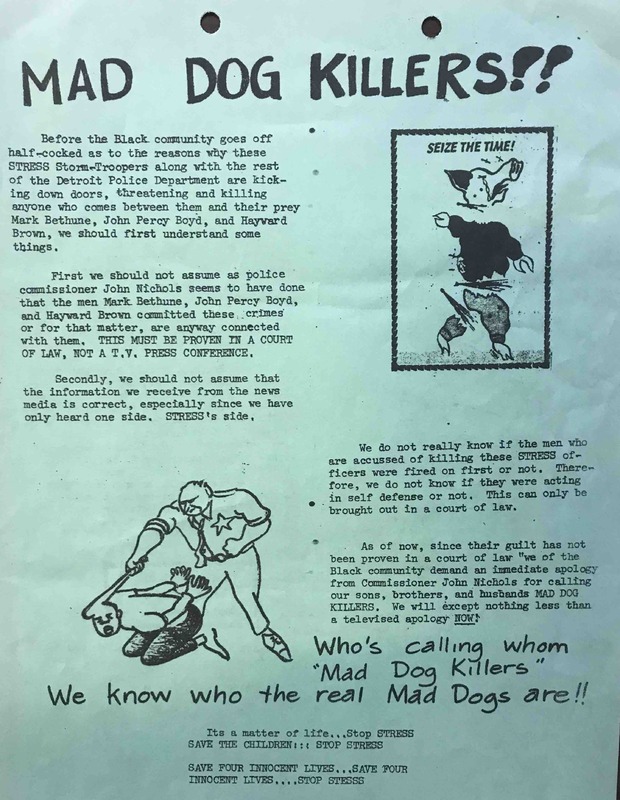 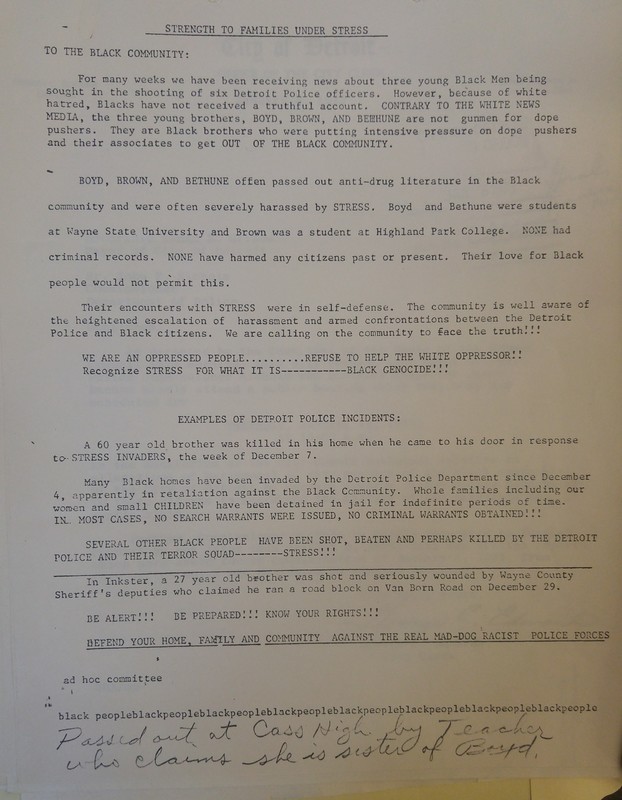 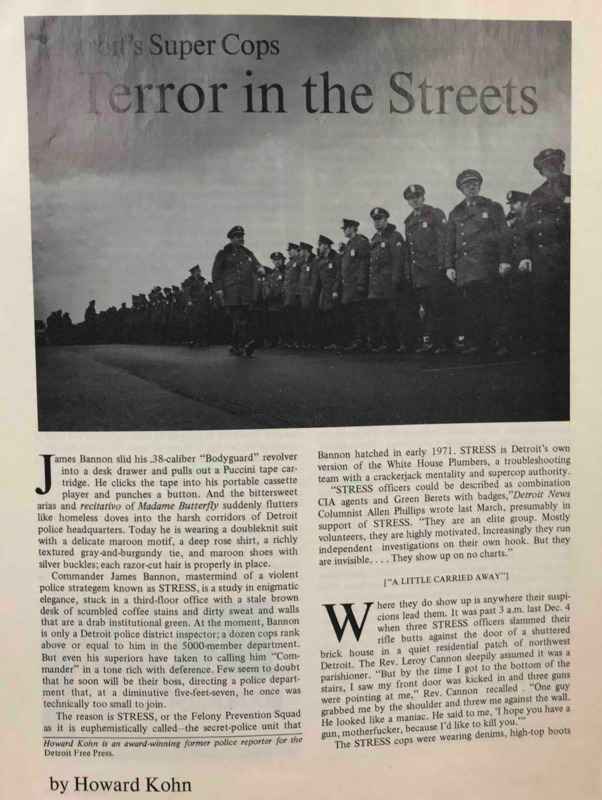