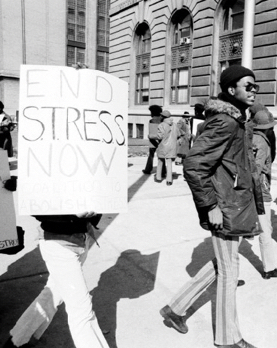 The Detroit Police Department's abuse of power and mass violations of constitutional rights during the lengthy manhunt for Boyd, Bethune, and Brown led to the formation of a united front in the African American community to demand the abolition of STRESS. Radical activists had been calling for the elimination of the STRESS unit since the fall of 1971, when an alliance led by Ken Cockrel and the Legal Defense Coalition established the State of Emergency Committee in response to the killing of teenagers Ricardo Buck and Craig Mitchell. Mainstream organizations including the NAACP supported the State of Emergency Committee, but other civil rights groups held out hope that STRESS could be reformed, and opinions within the Black community were clearly divided. The fallout from the Rochester Street Massacre led to a new wave of protests and a grassroots petition drive to abolish STRESS, but black and white radicals affiliated with the Labor Defense Coalition remained the driving force behind the anti-STRESS movement.

The manhunt of December 1972/January 1973 decisively altered the STRESS debate, especially because of the widespread outrage over the DPD's terror campaign against regular Black citizens inside their own homes. Mainstream civil rights groups led by the NAACP, along with key Black politicians, began to take a leading role in the anti-STRESS campaign, especially through the formation of the United Black Coalition (UBC). Radical activists endorsed its agenda but also considered the UBC to be too linked to the civil rights establishment and envisioned an even more confrontational multiracial mass movement to take control of the city's political institutions. The anti-STRESS movement expanded further after the ninth fatal shooting by STRESS officer Raymond Peterson, in March 1973, followed a month later by exposure of organized police narcotics corruption in the Pingree Street Conspiracy. By May, a scientific survey sponsored by the New Detroit Committee revealed that 65 percent of African Americans in the city endorsed the abolition of STRESS, while 78 percent of white residents supported continuation of the operation.

"The United Black Coalition's first task is to unify the movement of Black organanizations and individuals who will work to guarantee the immediate survival of Black people. We will promote the longer range goal of controlling those institutions which currently contain, blind, and oppress us all"--United Black Coalition, Jan. 1973

On Jan. 24, 1973, almost every prominent civil rights and black power leader in Detroit endorsed the mission of the new United Black Coalition, which called for a thorough and independent investigation into DPD abuses during the manhunt and demanded the suspension of STRESS pending the findings of the inquiry (see press release in gallery below, left). The new alliance was co-chaired by Elliott Hall, the president of the Detroit chapter of the NAACP, and Samuel Simpson of the Wolverine Bar Association, an organanization of Black attorneys. The signatories included every notable African American elected official, including Congressman John Conyers and State Senator Coleman Young, as well as the Guardians of Michigan and the leaders of middle-class Black organizations such as the Cotillion Club and the Booker T. Washington Business Association. Radical leaders also joined the UBC, including Ken Cockrel of the Labor Defense Coalition and the heads of the Detroit chapter of the Black Panthers, the Republic of New Africa, and multiple campus- and community-based black power groups. The list of endorsements was ecumenical by design, with only the Detroit Urban League conspicuous by its absence, even though the initial demands did not go as far as radical organizations clearly preferred.

In a sign of the shifting political climate, even the editorial page of the Detroit Free Press responded to the emergence of the United Black Coalition by calling for an investigation into the DPD's actions during the manhunt that would be "independent of police control." The editorial emphasized that the newspaper had always and still supported "the basic concept of STRESS as an effective instrument to fight crime," but it also criticized Commissioner Nichols for denying that any police abuses occurred when the evidence was clear that the DPD had "infringed on the rights of innocent people, seriously harming police-community relations."

The United Black Coalition soon added the abolition of STRESS to its formal demands, in addition to the necessity of an independent investigation into the abuses of the manhunt (right). The NAACP was the driving force behind the UBC and clearly believed that its leadership was essential to the creation of a coalition of Black unity that the multiracial radicals in the Labor Defense Coalition, who had previously formed the State of Emergency Committee for this purpose but were also defending Hayward Brown and the other manhunt fugitives as community heroes, could not achieve. The NAACP and the rest of Detroit's middle-class Black leadership also made a strategic decision to escalate their anti-STRESS activism in the context of the upcoming mayoral election, believing that a golden opportunity existed to mobilize African American voters to take control of city government and therefore the police department by out-maneuvering radical groups while keeping them inside a unified coalition (Ken Cockrel was considering a run for mayor, but he ultimately deferred to Coleman Young). Many of the mainstream civil rights groups that led the formation of the United Black Coalition had also organized the Jan. 4 coalition statement condemning the DPD manhunt that led to the dramatic public hearing at which more than one thousand Black citizens denounced Commissioner John Nichols and his STRESS unit.

The United Black Coalition worked to abolish the "murderous" STRESS unit but made clear that its ultimate goal was control of the city government under the "principle of self-determination for the Black community." Its first newsletter praised the Labor Defense Coalition for fighting STRESS in the courts, and expressed appreciation to the white anti-STRESS activists whose proper role was to "give support to the efforts of the Black community," but insisted that only a coalition led by influential civil rights groups and elected officials could successfully displace the white political machine of Mayor Gribbs, Commissioner Nichols, and Prosecutor Cahalan. The UBC argued that STRESS was the crisis that would unify the Black community, alongside the narcotics threat that the DPD refused to address. The coalition said that only a united front would "guarantee the immediate survival of Black people" and provide the foundation for the ultimate goal of controlling the political institutions in the city of Detroit, including the mayor's office and the police department. 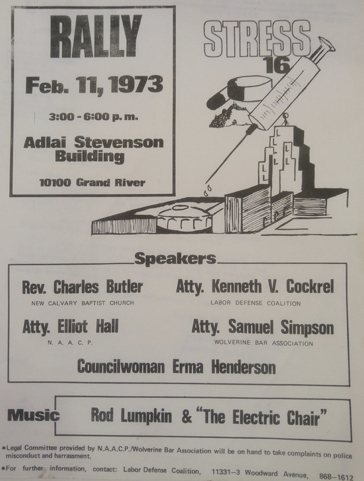 UBC Rally. On February 11, the United Black Coalition held a rally featuring five Black leaders, including the co-chairs from the NAACP and Wolverine Bar Association, Rev. Charles Butler, city councilwoman Erma Henderson, and the Labor Defense Coalition's Ken Cockrel. Around 1,500 people attended the event, which the posters advertised with a graphic image of both STRESS and a dope needle looming over and threatening the city of Detroit (right). The main message from the speakers was that only political unity to take control of the city government could address the interlocking crises of police brutality, crime, narcotics, poverty, and other social conditions that threatened Black Detroit. Ken Cockrel, as usual, stole the show and told the audience that "mass protests and lawsuits" had not shaken the oppressive white control of the city and the police department, but the mayoral election could. A few days after the rally, State Senator Coleman Young announced that he was running for mayor and promised to abolish STRESS, which he labeled an "execution squad rather than a law enforcement squad."

DPD Stonewalls the Manhunt Investigation. Also in February, the Detroit city council requested a DPD report on the internal investigation into the manhunt abuses and voted to create a commission to improve the relationship between the police department and the Black community. The UBC criticized this move as inadequate and argued that both history and present circumstances made it abundantly clear that only an independent external investigation could hold the police department to account. At the next meeting, Commissioner John Nichols informed the city council that the internal investigation had revealed zero instances of "harassment" or other misconduct by DPD officers during the manhunt. (He also announced that a Black police officer would become co-director of the STRESS unit, a public relations move that did nothing to mollify the anti-STRESS coalition). The very next day, Judge Thomas Foley of the Recorder's Court issued a follow-up ruling in the litigation filed by friends and family members of the fugitives that 56 specific warrantless home invasions and searches during the initial days of the manhunt constituted illegal actions on the part of the DPD. Radical activists, including many who signed on to the United Black Coalition, had no faith at all in the possibility of securing a full and fair investigation of the manhunt abuses through established channels and instead formed the Independent Black Commission on Inquiry into Police Terror and organized two weeks of public hearings designed to expose the criminality and brutality of the DPD and its STRESS operation (covered on the next page).

Urban League Remains Pro-STRESS. The Detroit Urban League was the only major civil rights organization that declined to join the United Black Coalition, despite the efforts of NAACP leaders to bring them on board. The DUL had repeatedly expressed support for STRESS, citing the urgency of protecting Black citizens from street crime, while calling for reforms to the unit's use of force policies and lack of African African American officers. During the manhunt, DUL leaders engaged in an internal debate that acknowledged the DPD's "terrorism" against the Black community and its failure to reform STRESS in substantive ways despite ample opportunity to do so. Some leaders called on their organization to join the coalition to abolish STRESS, but others argued that the "overwhelming" majority of city residents who wanted safety and protection from crime were being drowned out by "the demagogery of the extremists," a clear reference to Ken Cockrel and other Black radicals. In the end, DUL president Francis Kornegay informed the United Black Coalition that his organization would not change its previous position calling for reform of the STRESS unit and a fair investigation into its alleged abuses, but not supporting its abolition (gallery, below right).

Explore documents created by the NAACP-led United Black Coalition in the gallery below. Proceed to the next page, STRESS on Trial, for the response of radical socialist and Marxist groups that expressed both support and criticism of the UBC and envisioned transforming the STRESS crisis into a multiracial mass movement for political control of the city of Detroit. 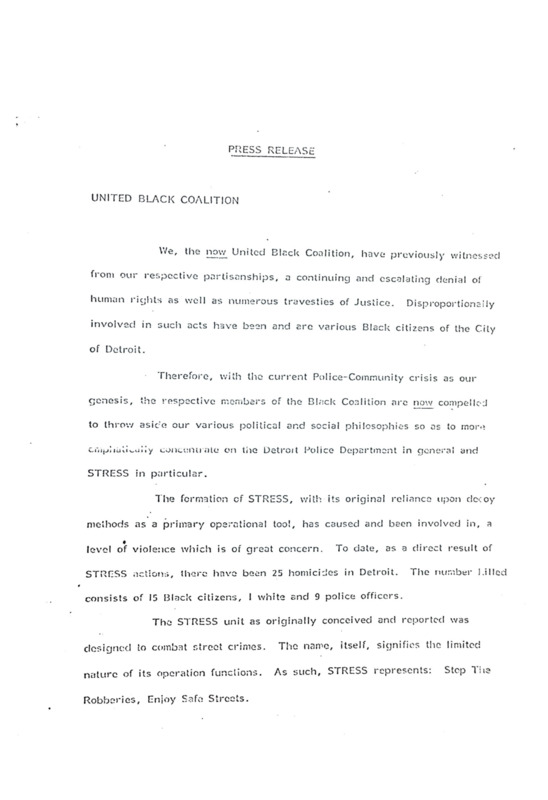 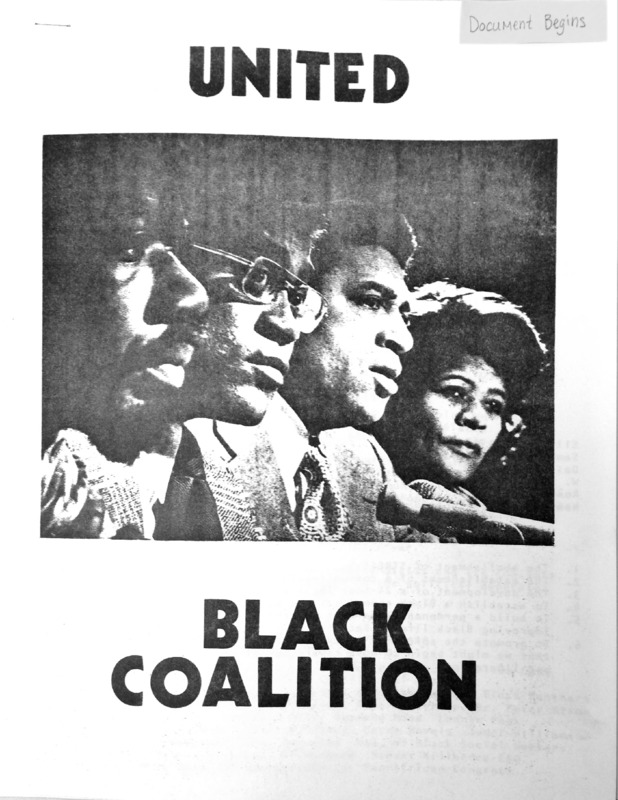 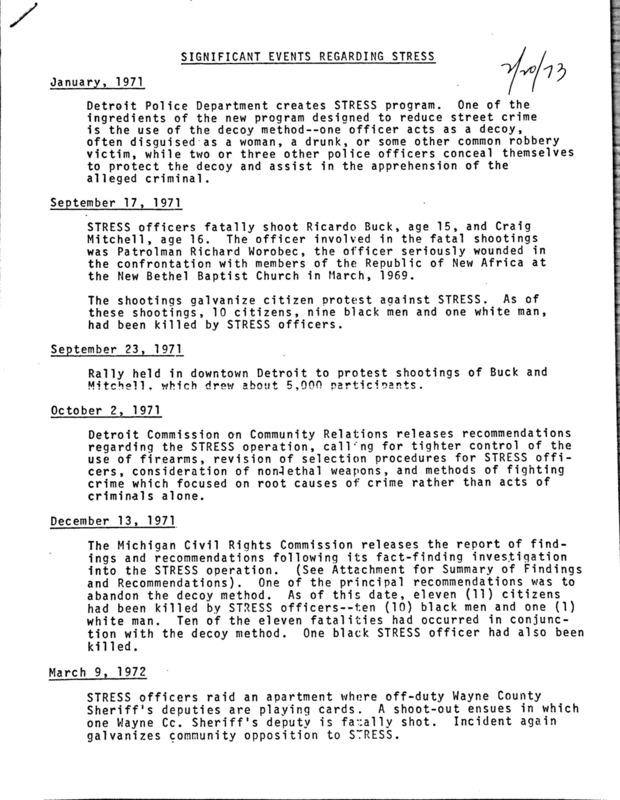 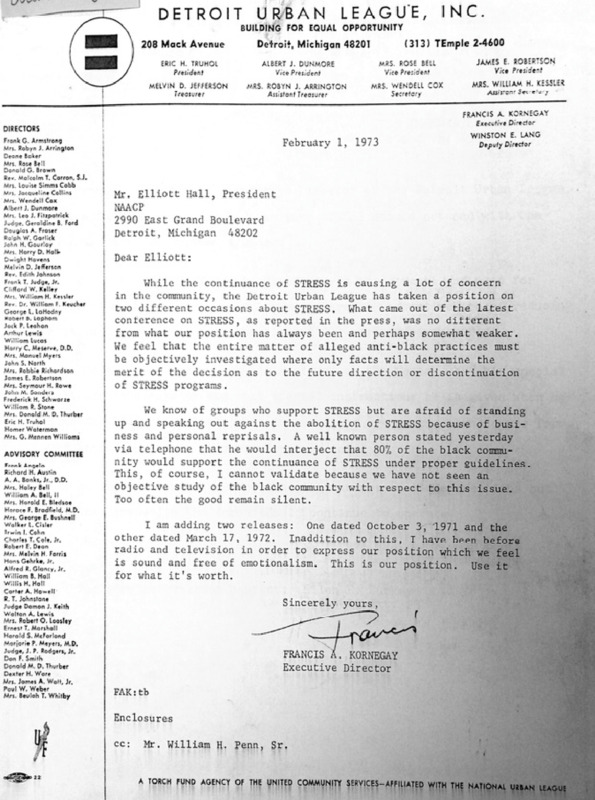