"We Are At War. STRESS has declared it!! What will you do when they come to bust in your door?"--Anti-STRESS flyer circulated during the DPD manhunt, Dec. 1972-Jan. 1973
Question: "What do you have to say to the people of Detroit about the state of the city?" Answer: "It's like a battle zone"--DPD Commissioner John Nichols to the Michigan Chronicle, Dec. 27, 1972 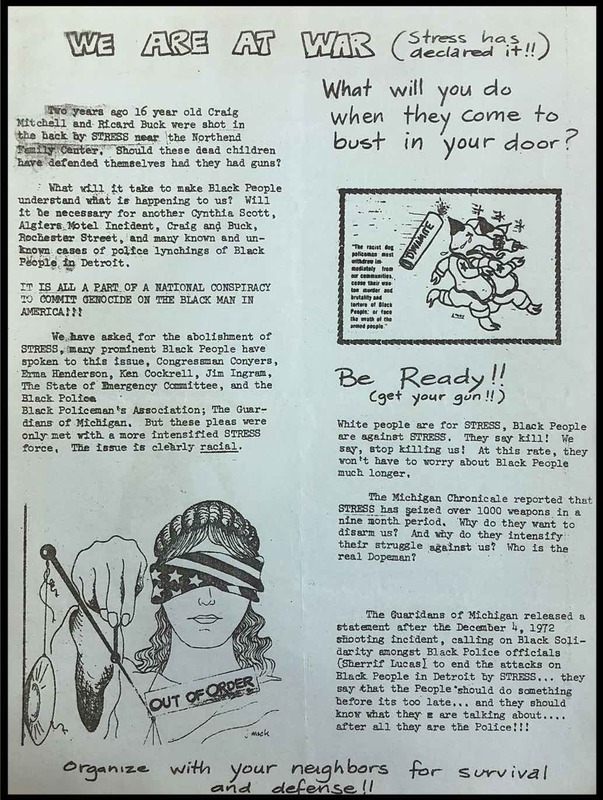 During 1972 and 1973, the radical wing of the "Abolish STRESS" movement argued that the Detroit Police Department had launched a war on the city's Black community. The necessary response, therefore, was a mass political mobilization that would disarm the STRESS unit and place both the city government and the DPD under community control. The STRESS operation's fatal shootings of 14 people between April 1971 and March 1972--almost all African American, most if not all clearly unjustified--turned the anti-STRESS campaign into a mass movement and created the sense of a city under siege. Not since the 1967 Uprising, when DPD officers alone killed 22 people and the city came under National Guard and Army occupation, had the stakes of the showdown between an overwhelmingly white police force and the African American community seemed so high. "THIS IS WAR. STRESS IS THE ENEMY," a flyer circulated after the Rochester Street Massacre proclaimed. "The gun has become the Law. We must disarm the police, or we will be enslaved by the gun forever. We must refuse to allow armed police in our neighborhood."

In December 1972, three young Black men engaged in two separate shootouts with STRESS patrol teams that left five officers wounded and one dead. The three men--Mark Bethune, John Boyd, and Hayward Brown--were community anti-narcotics activists willing to take vigilante measures against the dope trade that flourished with the complicity and corruption of a large number of DPD officers, as the exposure of the Pingree Street Conspiracy in spring 1973 made clear. To the police department and most white residents, the three men were dangerous criminals--"mad dog killers" in the words of Police Commissioner John Nichols. For a sizable number of Black community members, especially anti-STRESS activists and the poor and working-class people who lived in areas of pervasive police violence and drug trafficking, the men were somewhere between outright heroes and desperate "warriors" who were trying to do what had to be done. Bethune, Boyd, and Brown were a "vigilante group dedicated to community service," a radical anti-STRESS group declared, and they recognized that "a virtual state of war exists in the city of Detroit" between the Black community and a corrupt alliance of police mercenaries and narcotics traffickers (gallery below, right).

The Detroit Police Department responded with a full-blown, two-month manhunt for the three fugitives that involved an extraordinary range of brutal abuses of innocent Black citizens and mass violations of their civil and constitutional rights, from warrantless home invasions at gunpoint to systematic stop-and-search racial profiling in the streets (the shootout and manhunt are covered on the next page). A wide range of civil rights and black power organizations responded with the formation of a united front, the United Black Coalition, demanding the abolition of STRESS and envisioning a Black community takeover of the city government and the police department in the upcoming Nov. 1973 election. Radical activists went even further, especially after Commissioner Nichols declared the city to be a "battle zone," and declared that "we are at war" (flyer at right). Some black power radicals argued that armed self-defense was justified in the face of the "genocidal" campaign by STRESS and the DPD, and that the police must either withdraw from Black communities or "face the wrath of the armed people." A much broader alliance escalated the anti-STRESS campaign and demanded that the racist and murderous police department come under Black political control.

The "Abolish STRESS" campaign gained majority support in the Black community because of the DPD manhunt of December 1972/January 1973, and activists waged a multi-front attack on police violence and terror in the streets, in the courtroom, in people's tribunals, and through the political process. The pages in this section cover the DPD manhunt and its abuses, including the acquittal of surviving fugitive Hayward Brown in three separate trials; the formation of the United Black Coalition in January 1973; the strategy of radical groups to place STRESS on trial through a conspiracy lawsuit and an independent community tribunal; and the successful culmination of the "Abolish STRESS" campaign through the election of Coleman Young as the city's first Black mayor.

The gallery below contains key documents from the radical anti-STRESS movement analyzing the DPD operation as part of a broader racial and class war on the Black community by not only the police department but also the corporate-capitalist forces of gentrification, labor exploitation, drug trafficking, and control of political power. The solution, these radical activists believed, had to come through a mass mobilization that brought community control of the police department and of other political and economic institutions that determined the fate of the city's residents. 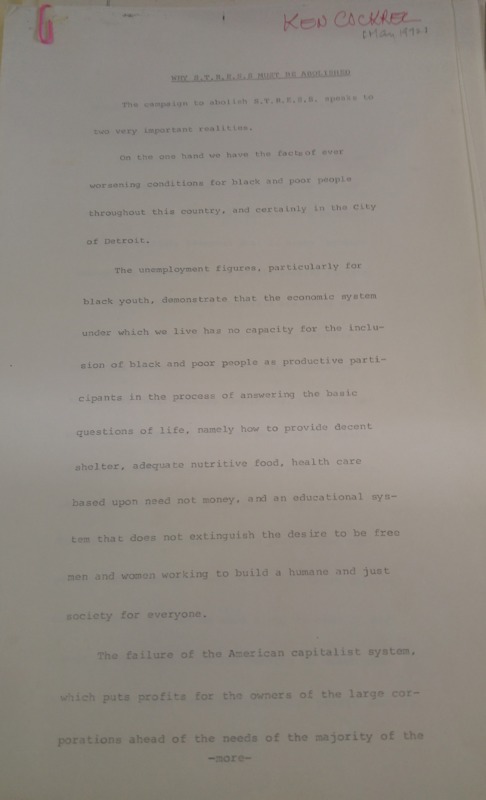 Ken Cockrel, anti-STRESS leader of the Labor Defense Coalition, manifesto "Why STRESS Must Be Abolished," May 1972 (10 pgs.) 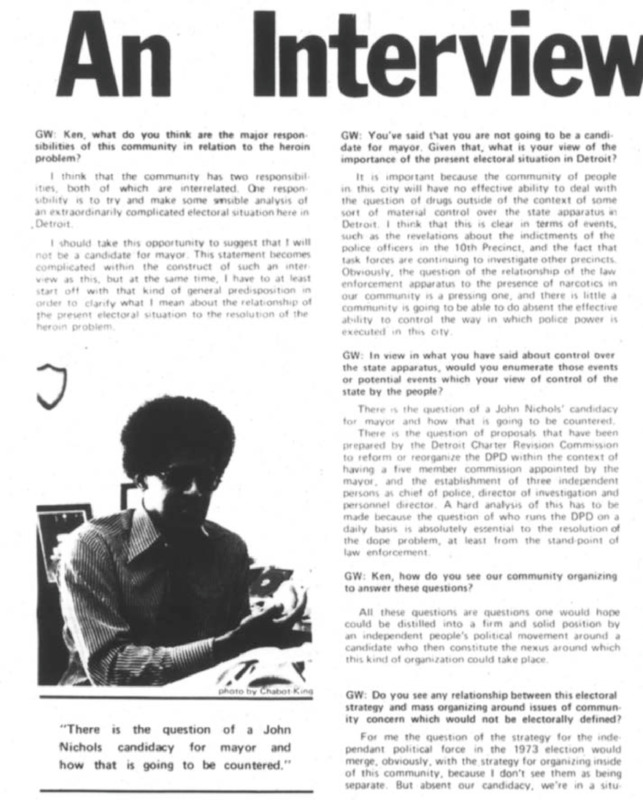 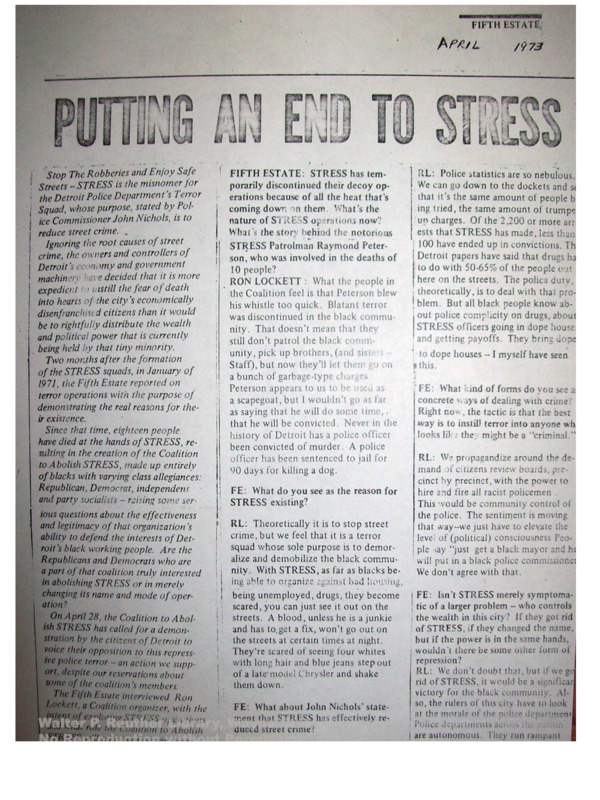 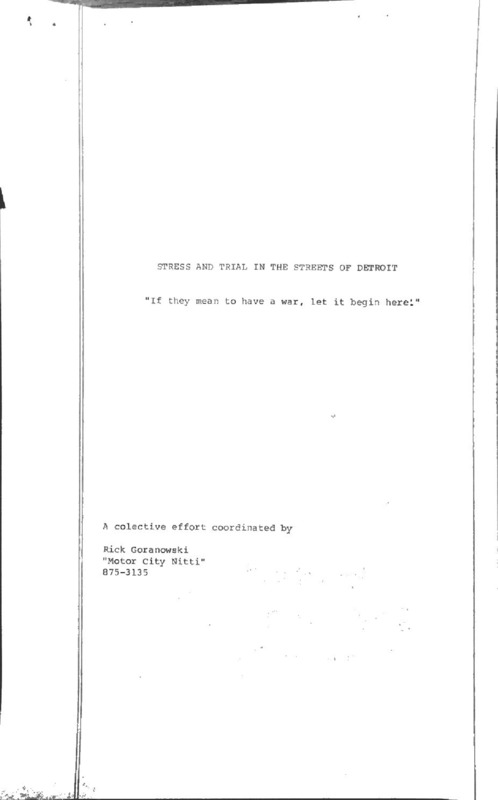 "STRESS and Trial in the Streets of Detroit," white radical analysis of police oppression and drug corruption links, 1973 (11 pgs.)