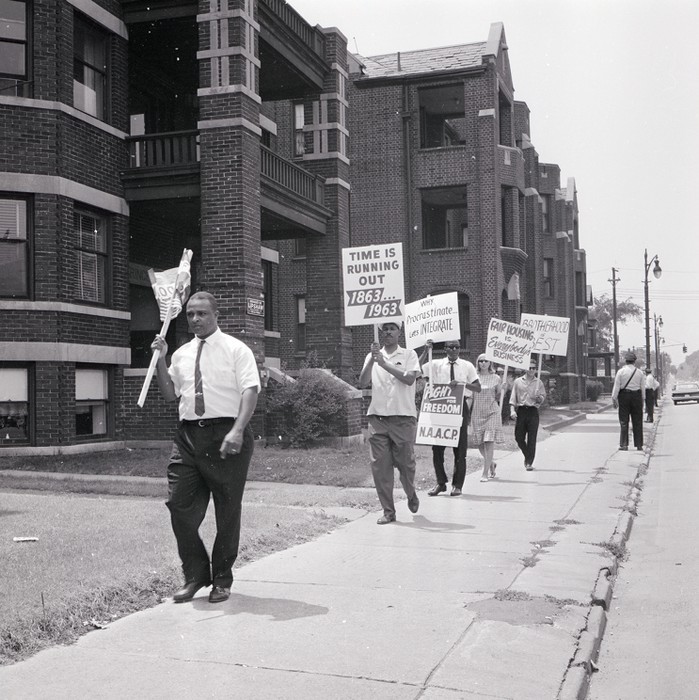 In December 1960, the United States Commission on Civil Rights (USCCR) convened two days of hearings in Detroit as part of an investigation of racial inequality in the urban North and West. The hearings in Detroit and several other cities, including New York and Los Angeles, focused on housing, education, employment, and law enforcement. The USCCR expressed particular interest in the "treatment accorded to Negroes by police officers" and the hiring practices of the Detroit Police Department. In their testimony, the white leaders of Detroit denied that the DPD practiced racial discrimination in any way, while the NAACP and black police officers told a completely different story of rampant police brutality and discrimination against African American citizens. The "Exposing Police Brutality" page recounts this testimony, while this introductory section contains a brief overview of what the USCCR hearings revealed about the deep structures of racial segregation and inequality in Jim Crow Detroit. (View the full transcript of the USCCR Detroit hearings at this link-note large file/53 MB).

The governor of Michigan and the mayor of Detroit, both white men, testified first. Gov. Mennen Williams, a liberal Democrat, praised the state of Michigan for "tremendous progress in the field of civil rights" but acknowledged that more could be done. Mennen boasted that the state had established a fair employment law in 1955 to ban racial discrimination in the job market, over substantial white opposition, and had stepped up enforcement against businesses that violated its provisions, although "the Negro, unfortunately, is still the last hired and the first fired." The governor admitted that the state legislature had been unwilling to pass a fair housing law to ban racial discrimination in the sale and rental of property, and "in this area we have a long way to go."  He then stated:

Detroit mayor Louis Miriani, a conservative Republican, went next. Miriani told a rosier story about Detroit's progress toward "equal opportunities and equal treatment of its citizens" in the areas of housing, employment, and law enforcement. The mayor credited Detroit's enlightened leadership and "moral climate," as well as the biracial Detroit Commission on Community Relations, for the city's positive race relations. 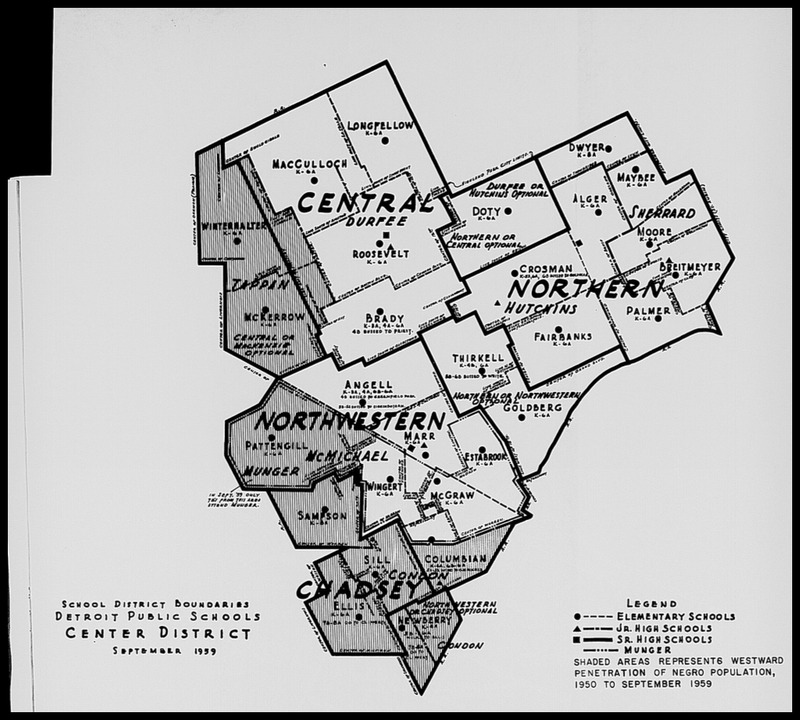 Employment: The civil rights organizations that testified at the USCCR hearing told a different story of a Jim Crow northern city. The Urban League, a moderate business-oriented group, reported "very few Negroes who are employed in jobs above the semiskilled levels" and an almost complete refusal by employers to promote African Americans to supervisory positions over white workers. According to the Urban League, the fair employment law lacked strong enforcement mechanisms and was ineffective in preventing widespread racial discrimination in the job market.

Education: Local black activists informed the USCCR hearing that the Detroit Public Schools (DPS) was responsible for "promotion and maintenance of a segregated school system." The board of education and white city leaders blamed segregated schools on housing patterns. The Citizens Association for Better Schools, an African American parents group, presented the map on the right to demonstrate that the board of education repeatedly adjusted the attendance boundaries for individual schools to separate white and black students during the process of neighborhood racial transition, to make sure that segregated housing would keep producing segregated schools. The official DPS map, created in 1959, explicitly referenced the "westward penetration of Negro population" as a guide to redrawing attendance zones. The Citizens Association for Better Schools also emphasized that the segregated facilities reserved for black students were unequal in many ways.

Housing:  Several white witnesses, including the president of the Detroit Real Estate Board, downplayed or denied the existence of racial discrimination in the housing market and stated that the policies of the federal and local governments promoted equal opportunity. Every civil rights organization disagreed, vociferously.

William Price of the Urban League stated that housing discrimination in Detroit violated the constitutional guarantee of equal opportunity and that the city in effect had a Jim Crow housing market, as "the housing mobility of Negro families is restricted to areas predominantly occupied to Negroes." The Urban League blamed segregation on banks and other lending institutions that received federal mortgage subsidies, on the home building industry, on real estate brokers, and on regular white homeowners and landlords. The federal government, through the FHA and VA mortgage lending programs, "has aided and abetted" the segregationist operations of the private housing sector.

"This practice and philosophy is to keep Negro families contained in the central core sections of the city and to prohibit mobility"-William Price, Detroit Urban League

Urban Renewal: Civil rights advocates, joined by academic experts, also argued that federally funded urban renewal and highway construction programs has inflamed racial tensions and worsened the segregated housing market by displacing African American residents without providing them adequate places to live. Many displaced people ended up in already crowded all-black neighborhoods, which increased the pressure on the housing market as middle-class black families moved into white neighborhoods and white families either fought back or moved out to the suburbs. They called on the federal government to provide urban renewal funds only to cities that made an affirmative commitment to seek racially integrated housing.

Law Enforcement: The NAACP and the Urban League accused the Detroit Police Department of systematic discrimination and brutality against African American citizens in the December 1960 USCCR hearing. This story continues on the Exposing Police Brutality page, preceded by the 1957 account of police brutality suffered by Robert Mitchell, next. 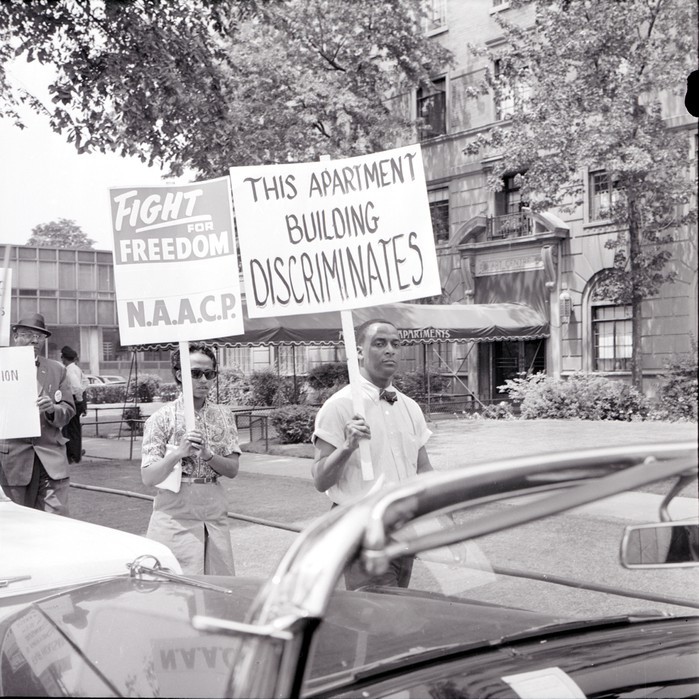