In the summer of 1963, Detroit's reputation as a liberal northern city with peaceful race relations collided with the realities of deeply entrenched racial discrimination against African Americans, especially in the areas of housing segregation and police brutality. On June 23, Rev. Martin Luther King, Jr., led the Walk for Freedom, a massive march of 125,000 people, and the largest civil rights demonstration in American history to date, through the city of Detroit. King and other mainstream civil rights leaders commended the Detroit Police Department for keeping the peace and specifically praised Mayor Jerome Cavanagh and Police Commissioner George Edwards for proving that they were allies of the movement.

Twelve days later, DPD Officer Theodore Spicher shot and killed an African American woman, Cynthia Scott, leading to several months of street protests led by radical black activists who rejected the white liberal leadership of Detroit as hardly different from the Jim Crow South. They accused Cavanagh and Edwards, and the prosecutor who labeled Cynthia Scott's death a "justifiable homicide," of covering up the cold-blooded police murder of an unarmed black woman. Detroit's reputation for progressive race relations was always a facade, covering up pervasive patterns of racial segregation and inequitable policing, but the Cynthia Scott protests threw this reality into sharp relief and marked a new phase of the struggle for racial justice. After the summer of 1963, Detroit would never be the same.

At left, Rev. King leads 125,000 people down Woodward Avenue in the Walk for Freedom, June 23. At right, 2,500 African Americans protest the Cynthia Scott killing and cover-up at DPD headquarters, July 13. 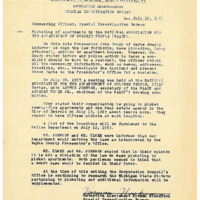 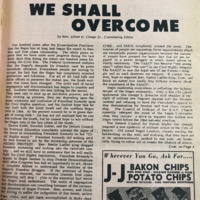 The Walk for Freedom

During 1963-1964, civil rights activists organized direct-action protests against housing and school segregation in cities and suburbs throughout the North and West, including Detroit. This history is less well known than the infamous stories of police dogs and vicious crackdowns in southern cities such as Birmingham and Selma, but it is also a crucial chapter in the struggle for racial justice in modern America. Metropolitan Detroit was extremely segregated by race in the early-to-mid 1960s and many suburbs remained all-white into the 1970s.

In the spring of 1963, the NAACP began conducting protest marches into Detroit's all-white suburbs, part of an effort to pressure the state of Michigan into passing a fair-housing law. The NAACP also picketed apartment complexes and real estate agencies in the city that refused to rent to African Americans, which caused the Wayne County prosecutor and the Detroit Police Department to threaten civil rights activists with arrest for violation of a picketing law (right). The DPD's Special Investigation Bureau, which created this document, was a secretive unit that kept civil rights groups and other political organizations under surveillance and sought to limit their ability to bring about social change as they protested racial discrimination in housing, schools, and workplaces.

The Detroit Council for Human Rights (DCHR), a newly established civil rights organization, organized many of the direct-action protests during 1963 and played the key role in mobilizing African Americans in Detroit for the Walk for Freedom. Militant black preachers, most notably Rev. C. L. Franklin of New Bethel Baptist Church and Rev. Albert Cleage of the Shrine of the Black Madonna, were the driving force behind the DCHR.  Their clear goal was to supplant the more middle-class NAACP as the voice of the black masses in Detroit, and they initially resisted the inclusion of white liberals such as Mayor Jerome Cavanagh as speakers at the Freedom Walk. Rev. Cleage (document at right) called for a "new epidemic of militant action" in Detroit and a radical message of "Freedom Now."

Rev. Martin Luther King, Jr., delivered a rendition of the "I Have a Dream" speech at the Walk for Freedom in Detroit, two months before the much more famous version he delivered at the March on Washington. He declared that "we've got to come to see that the problem of racial injustice is a national problem," and he singled out racial discrimination in housing, schools, and employment in the North. The climactic refrain included this line:

"I have a dream this afternoon that one day right here in Detroit, Negroes will be able to buy a house or rent a house anywhere that their money will carry them and they will be able to get a job"-Rev. Martin Luther King, Jr.

Mayor Jerome Cavanagh also addressed the crowd. He told a white liberal story of Detroit's progress and racial enlightenment, in which the city was better than most, but still could improve.

"We Detroiters know that in many ways we are ahead of the nation in respecting the rights of man. But we are not so presumptuous that we are satisfied. We know that there is much to be done. But we know that as a community we are well on our way. [The March] like so many of the fast-moving events of our time, is evidence that the unsavory traditions of prejudice are being shaken to their roots. Those who still cling to these discredited beliefs in inequality have only to open their eyes and their ears to learn that theirs is a shrinking minority – and perhaps the only minority for which there is no room in America."-Mayor Jerome Cavanagh 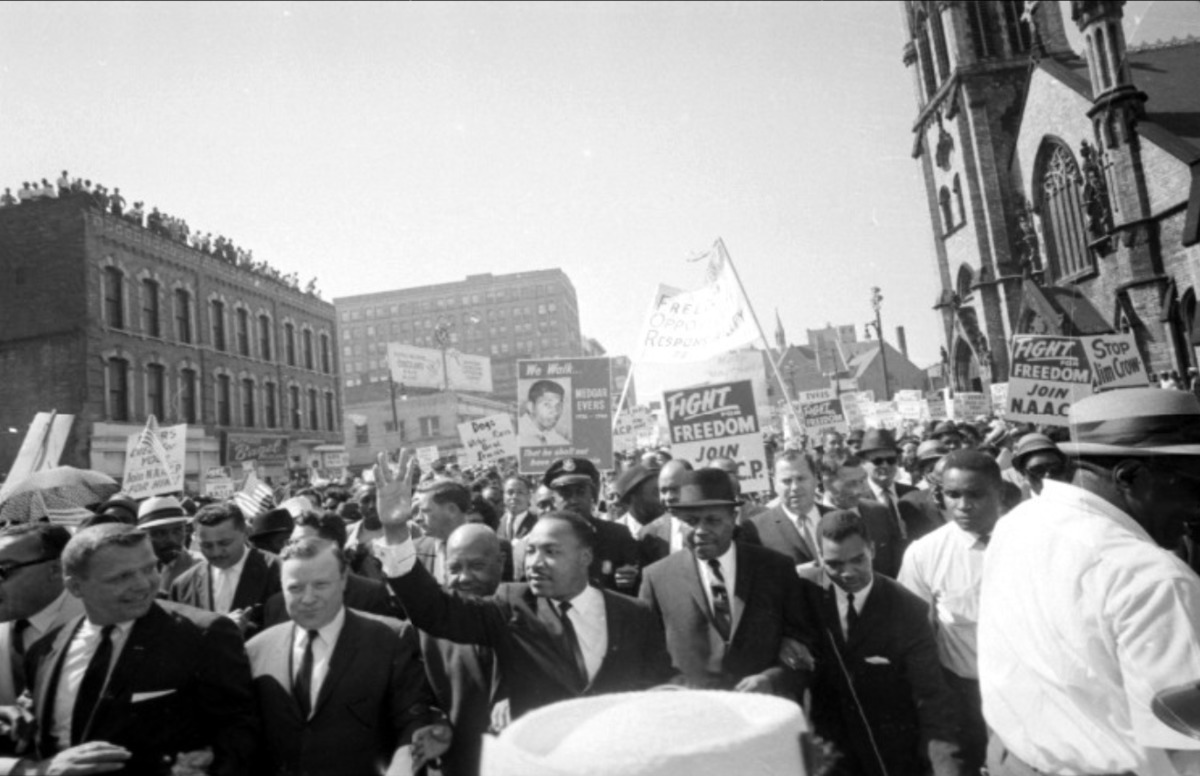 Rev. King leads the Walk for Freedom down Woodward Ave. before his "I Have a Dream" speech 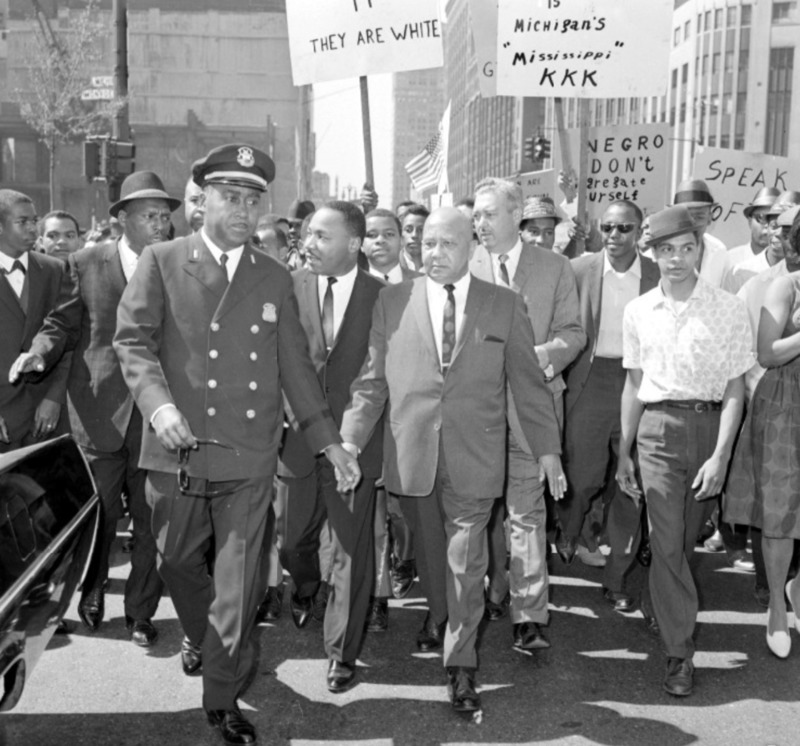 An African American police officer escorts Rev. King and other civil rights leaders in the Walk for Freedom. Note the cropped sign equating an unknown organization in Michigan with the Mississippi KKK.

King and other civil rights leaders praised the Detroit Police Department for its professionalism during the Walk for Freedom, and the city's white leadership and media lavishly praised themselves. On June 24, the day after the march, Police Commissioner Edwards stated: “I have been receiving congratulations on the work of the Police Department from all walks of life in the City of Detroit.” Edwards also told his officers, "it was a tremendous tribute to the work of the Police Department of this community and every single officer who was on duty yesterday. I suggest to you that the discipline, the skill, the strength which which all details handled the problems of this parade and meeting constituted a high water mark of professionalism." The Detroit Free Press and the Detroit News also wrote multiple articles about how superbly the police operated to maintain public safety, to prevent violence, and to refrain from using force against the demonstrators (the march was orderly and nonviolent, so it is not clear why police restraint from deploying violence is particularly notable, except as a contrast to the open and unapologetic racism of the Birmingham police).

The gallery below includes documents praising the DPD, and especially Commissioner George Edwards, from Rev. King and the Michigan ACLU. King told Edwards that he "was both uplifted and consoled to be with a police force that proved to be a genuine protector and a friend indeed." The ACLU credited the DPD, perhaps excessively, with having "maintained order gently but firmly." As would soon become clear in the mass protests that followed the police killing of Cynthia Scott, militant civil rights organizations such as the Detroit Council for Human Rights, and many ordinary African American people in Detroit, did not share these experiences and this view.

African American organizations continued to protest housing and school segregation during the mid-1960s and beyond, as well as holding demonstrations against businesses that practiced racial discrimination in hiring. In another sign of Detroit's racial polarization, the year after the Walk for Freedom, two-thirds of the city's white voters approved an unconstitutional ordinance that would have guaranteed their right to discriminate based on race in the sale and rental of property. 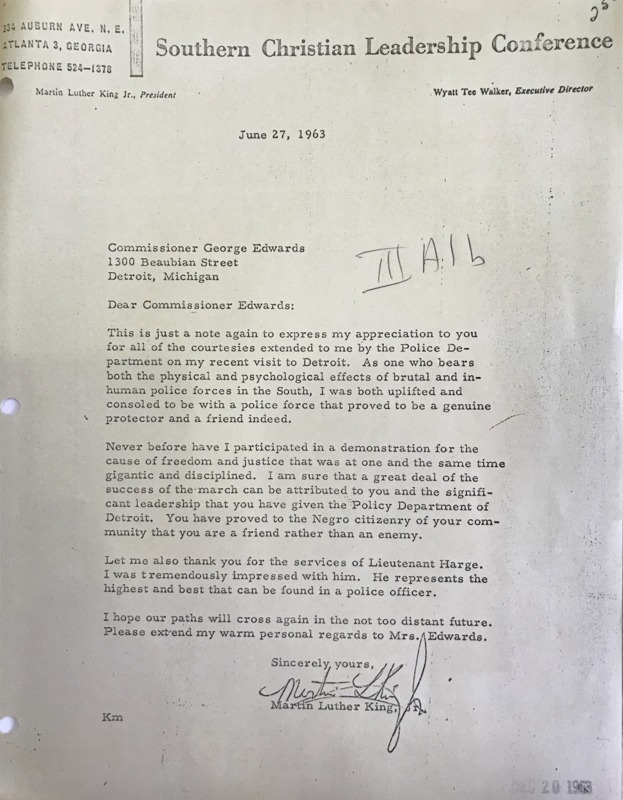 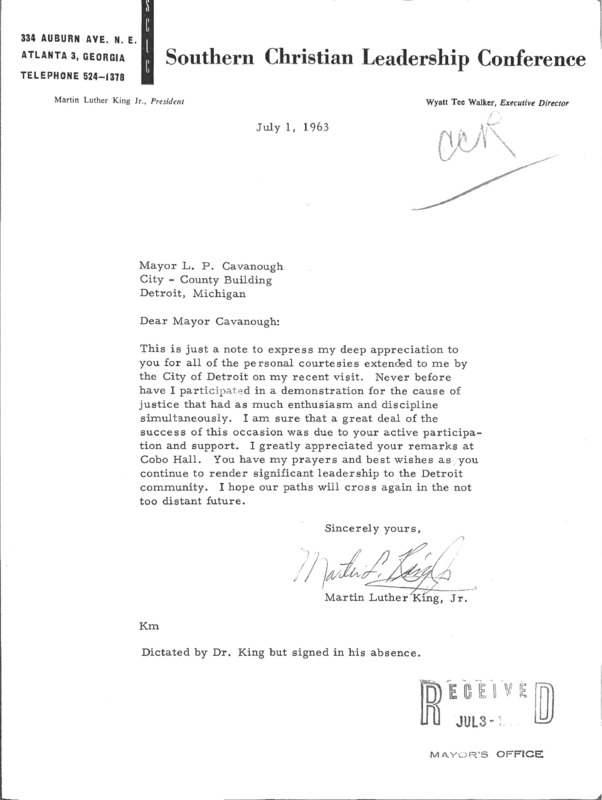 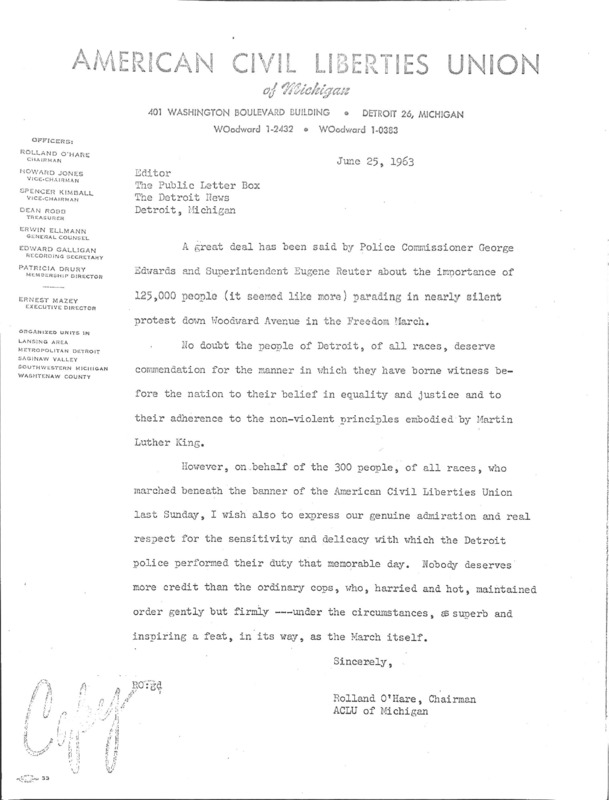 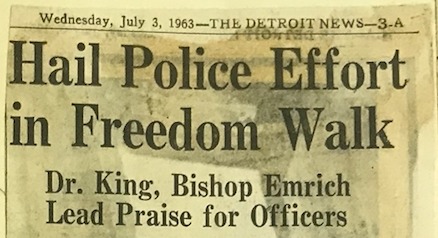 Juxtaposing the Walk for Freedom and the Cynthia Scott Killing

Soon after the march, Commissioner Edwards left on an extended vacation to Europe. Before his departure, Edwards and Mayor Cavanagh boasted that the crime rate in Detroit was falling, even while the national rate was rising, thanks to the professionalism of the Detroit Police Department and the improvement of police-community relations thanks to their liberal, color-blind reforms. Then came the murder of Cynthia Scott, the protests from African Americans in the street, and accusations of a cover-up by the DPD, the mayor's office, the county prosecutor, and beyond.

This interactive map shows the trajectory of the Walk for Freedom down Woodward Avenue to Cobo Hall (black line), and the proximity of the location where Officer Theodore Spicher killed Cynthia Scott in a notorious vice district located one black off of Woodward (star). The map also reveals how both the march and the Spicher-Scott encounter took place in the zone of interracial interaction along the clear color line that separated black and white Detroit. Visit the next page for the Cynthia Scott story.