"The Red Squad's intent was to 'root out' and 'expose' subversives in Michigan during the 1950s, 60s and 70s, and intimidate political activists who participated in the labor and civil rights movements, opposed the Vietnam Wars, or engaged in cultural or social activies judged by police to be 'subversive'." - Red Squad Notification and Distribution Compliance Program 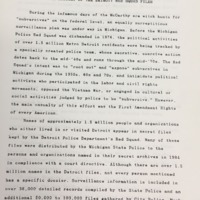 Expose: "The History of the Detroit Red Squad Files" (4 pages)

The Detroit Police Department formed its so-called Red Squad in the mid-1940, predating its counterpart in the Michigan State Police (MSP). The secret, undercover unit, which operated under the euphemism Criminal Intelligence Bureau (and sometimes the Subversive Detail), specialized in political surveillance before being disbanded in 1974 after exposure by civil liberties groups.  Red Squad officers investigated and exposed political enemies of the establishment and aimed to disrupt any social movement that appeared threatening. Street level operatives attended meetings, surveilled offices, infiltrated organizations, and gathered information on demonstrations and protests.

The DPD's Red Squad (Criminal Intelligence Bureau) worked closely with the Michigan State Police and  targeted both organizations and individuals for their political beliefs. Roughly 1.5 million names appear in the Red Squad files, as exposed in 1984 by court mandate. The Michigan State Police amassed 38,000 detailed reports on individual citizens, and the DPD collected between 50,000 and 100,000 additional files on individuals. The Red Squad investigated and documented most civil rights leaders, from the NAACP to Black Power organizations, as well as leaders from labor, antiwar, and other such groups. The Red Squads also collected information on individual members of these organizations and often on regular people who just attended rallies, demonstrations, and protests.

The DPD and MSP Red Squads also worked closely with the FBI's COINTELPRO initiative to monitor and "neutralize" civil rights groups and other progressive organizations. These three groups collaborated in Michigan, pooling resources and informants in order to more accurately assess the threat they presumed political 'subversives' posed to their established order.  Political surveillance of American citizens by local police departments was not just approved of, but also supplemented by, federal law enforcement.

The Red Squad's Role in the Civil Rights Era 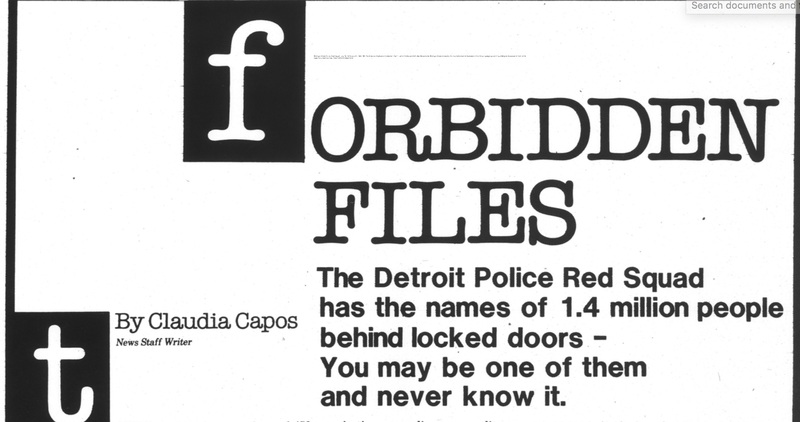 Law enforcement officials in Detroit deemed the civil rights movement an enemy of public order and a threat to the operational power of officers on the street. To combat this threat, the DPD's Criminal Intelligence Bureau (Red Squad) targeted civil rights groups and their members in its investigations, including many Detroiters who posed no threat of violence whatsoever and simply campaigned for equal protection under the law.

The Red Squad had numerous objectives specific to the civil rights movement. Undercover operatives gained knowledge of demonstrations, meetings, and protests by conducting massive surveillance initiatives. The unit kept flyers, transcripts, and photographs of groups and individuals on file to monitor activity. At events, undercover agents observed speeches, content written on pickets, and attendants they recognized or deemed important.

Many groups came under covert surveillance by the Red Squad, including majority-white and interracial radical organizations. In the mid-1960s, primary targets included the Northern Student Movement (NSM), the Adult Community Movement for Equality (ACME), the Afro-American Unity Movement, Students for a Democratic Society (SDS), the Detroit Committee to End the War in Vietnam (DCEWV), and the Friday Night Socialist Forum. The leaders of these organizations were subject to rigorous scrutiny, as DPD surveillance operatives noted details as minute as daily travel and license plate numbers. The Red Squad also collected photos, attendance records at public events, arrest records, public statements, social security numbers, and physical descriptions of these individuals. 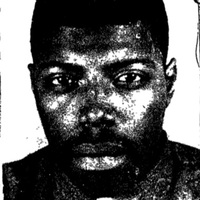 Unlike FBI COINTELPRO, there are few documents available to reproduce from the DPD's and MSP's Red Squad files, because the court order requiring their preservation also sealed them, for privacy concerns, unless explicitly authorized by the person under surveillance. At Wayne State's Reuther Library, for example, researchers can view the restricted Red Quad files of Detroit activists such as Kenneth and Sheila Cockrel but may not quote from or reproduce the documents in any way. Despite these limitations, other sections of this exhibit present evidence of illegal Detroit police and FBI surveillance of black militant organizations in the late 1960s.

The digitized FBI records in the National Archives contain parts of the Detroit Police Department's "Intelligence Bureau File" on General Gordon Baker, a black power and Marxist labor activist who helped lead the protests against the police killing of Cynthia Scott in 1963 and was a leader in numous radical Detroit-based organizations, including the League of Revolutionary Black Workers and the Dodge Revolutionary Movement. Baker was also arrested and prosecuted for his participation in the 1966 Kercheval Incident, after the FBI tipped off the DPD, and arrested again during the 1967 Detroit Uprising, among many other encounters with police. The gallery below contains a sampling of the intensive surveillance of General Baker and his allies by the DPD's Criminal Investigation Bureau and Special Investigation Bureau, two of the units that made up the so-called "Red Squad." These documents, from the FBI's file on General Baker, show how the DPD shared its counter-intelligence on political activists with federal law enforcement as well as acting on information provided by FBI COINTELPRO. 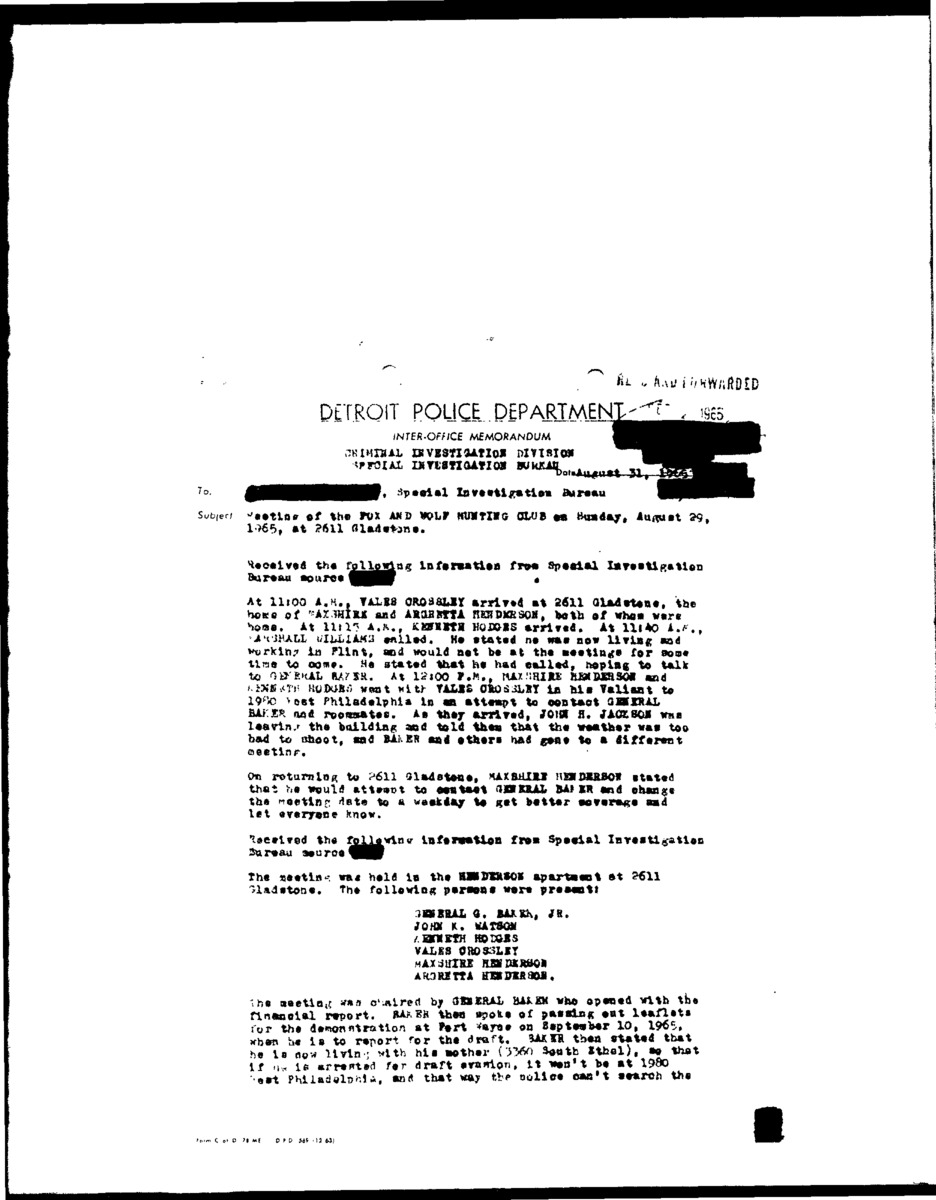 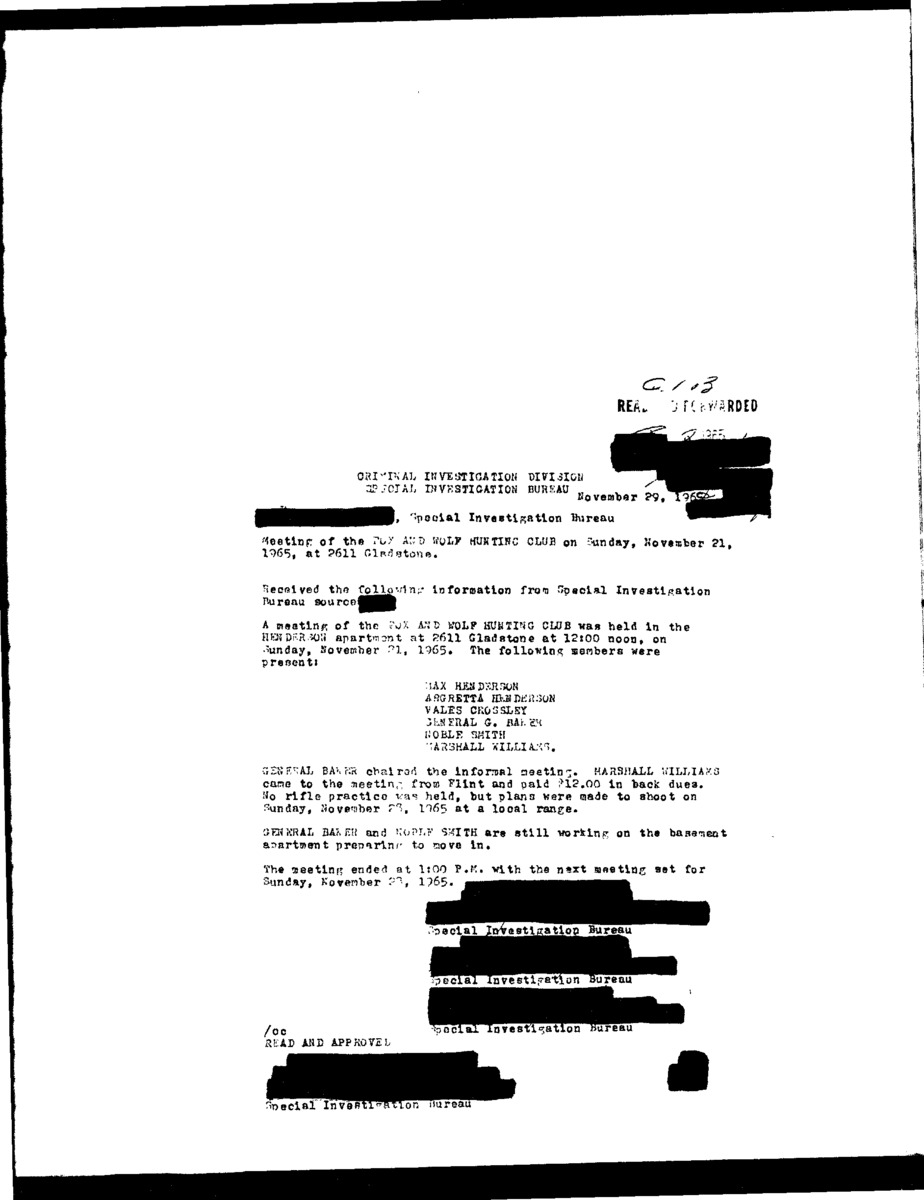 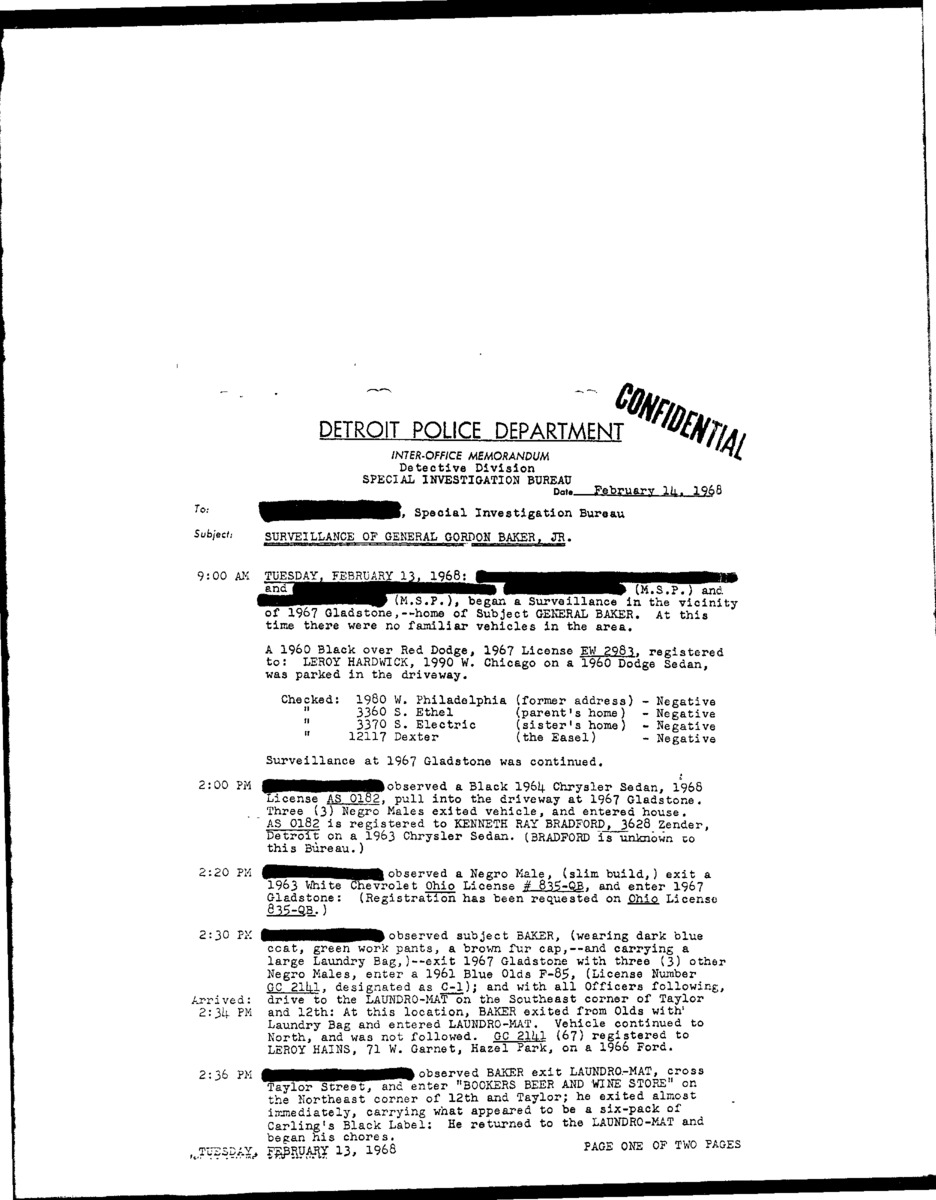 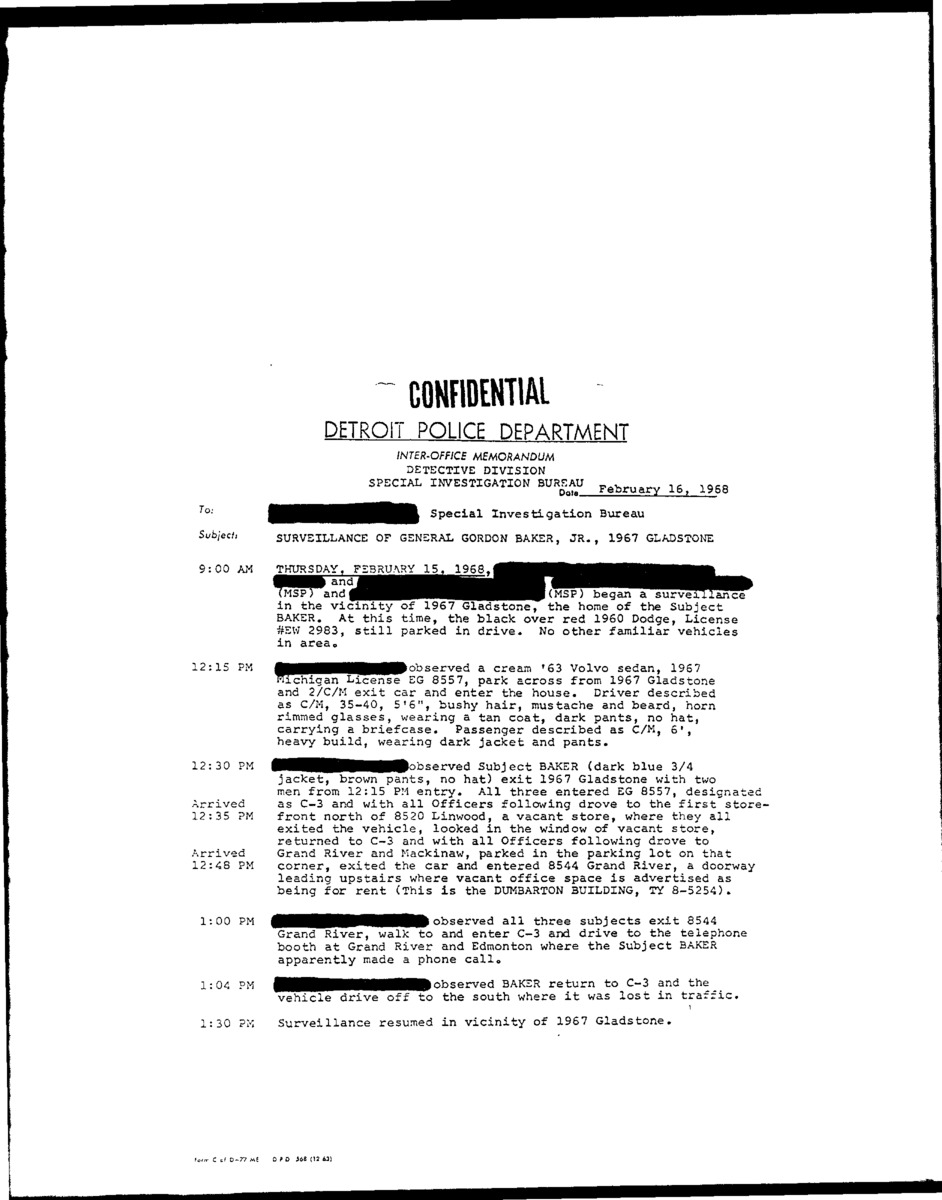 The Detroit Committee to End the War in Vietnam (DCEWV) operated from 1965, when founded by Wayne State University students, into the 1970s. The DPD's Red Squad considered the group a prime enemy of the establishment. Undercover operatives from the Criminal Intelligence Bureau spied on the DCEWV for years, noting its membership, public events, lists of speakers, and interaction with other groups. The Red Squad ultimately linked the DCEWV to the Socialist Workers Party, the Young Socialist Alliance (YSA), and the Friday Night Socialist Forum. In its files, the DPD's Criminal Intelligence Bureau painted the DCEWV as a communist organization, which was the same way that the FBI justified its unconstitutional surveillance of left-wing activists, by linking them to communism and alleging that they were conspiring to overthrow the U.S. government by violence.

One of many examples of the DPD's surveillance can be found at the October 1965 Teach-In sponsored by the DCEWV as part of the "International Days of Protest" against the Vietnam War. The event featured notable community figures who spoke out against the draft, the Vietnam War, and racial discrimination in Detroit. In the surveillance memo below, the names of all DPD officials are redacted--protecting the identity of law enforcement officials who participated in mass violations of the civil liberties of American citizens.

Note: These documents about DCEWV surveillance are public because of their release by Peter Werbe, a prominent white radical in Detroit who was the editor of the Fifth Estate, a radical underground newspaper, and active in many progressive causes. Peter Werbe's Fifth Estate Records are archived in the Labadie Collection at the University of Michigan. These documents are from his personal Red Squad surveillance  file. 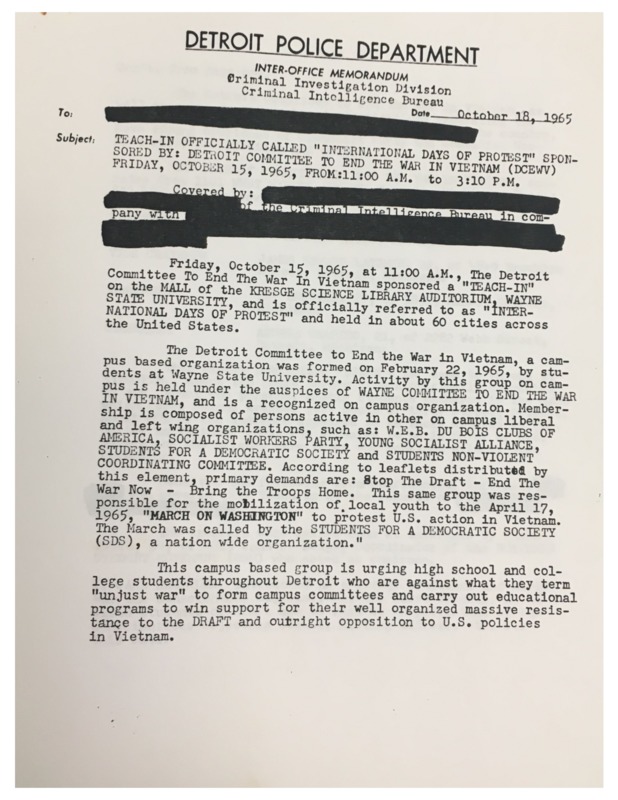 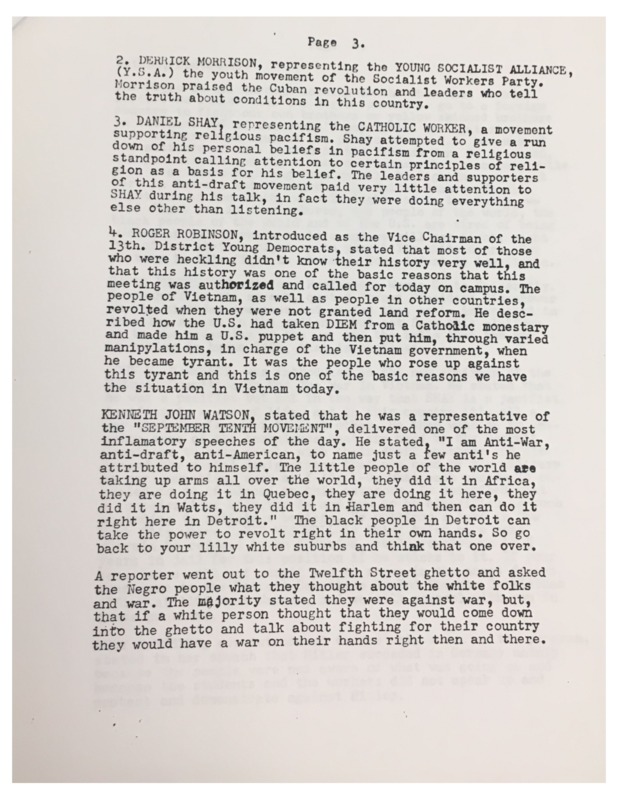 DCEWV surveillance memo, including summary of speeches given (p. 3-4) 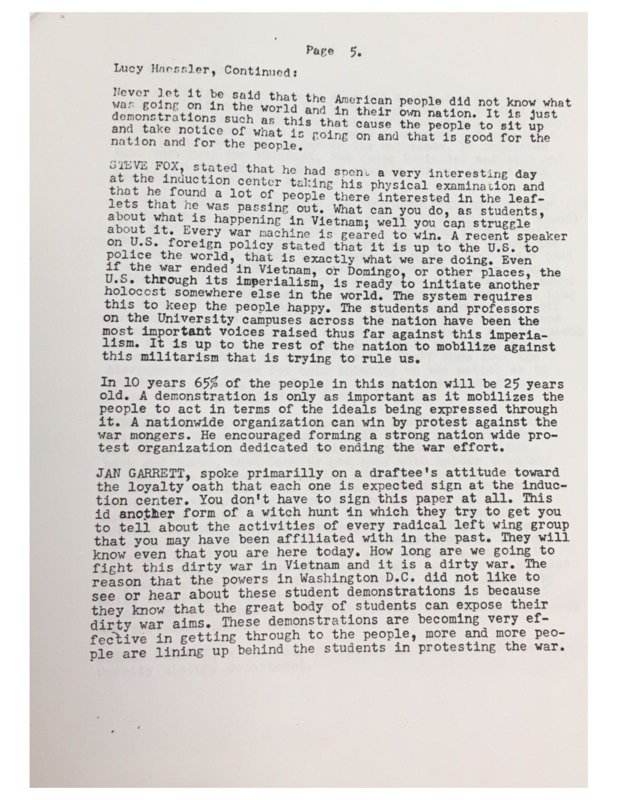 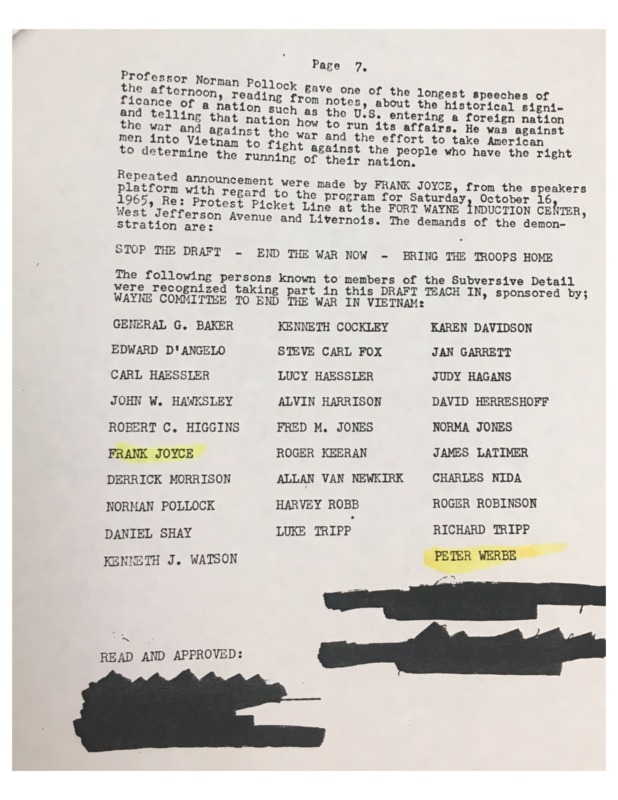 Radical activists, black and white, gave many of the speeches at the October DCEWV teach-in. Undercover Red Squad agents, working under the auspices of the Subversive Detail of the DPD's Criminal Intelligence Bureau, linked the group and the event's speakers to racial rioting and articulated concern over the ideological contents of various speeches. Compiling lists of attendees at antiwar demonstrations allowed the Red Squad to cross-reference names from other organizations and more effectively monitor their 'subjects.' 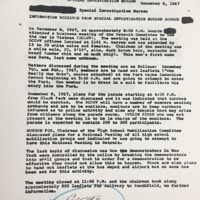 In addition to surveilling the DCEWV's public events throughout the 1960s, the Red Squad infiltrated meetings of the organization with undercover spies. A heavily redacted copy of a report from an undercover source can be viewed on the right. The report contains a detailed account of the actual meeting held by the leadership of the DCEWV, as well as commentary on a scheduled parade and its organizational structure. The informant stresses that the DCEWV tasked members specially with monitoring police activity and thus painted the group in complete opposition to law enforcement. This allowed the police to simultaneously bolster their surveillance and justify their questionable, if not clearly illegal, tactics.

The DPD's Red Squad routinely infiltrated civil rights, antiwar, and other radical organizations to gain knowledge of their agendas and ideals. At another meeting in December 1967, Red Squad operatives took a political approach. Instead of reporting on planned events, the informant focused on the substance of the ideological message delivered by DCEWV leadership. The informant claimed the group propagated communistic values and preached unrelenting equality. The Red Squad thus labeled the DCEWV as not only an opponent of the war in Vietnam but in active opposition against US interests in Asia. This serves as another example of the sort of self-justification the Red Squad relied on to continue its mission. Reports transformed political activism and speech, protected under the U.S. constitution, into 'subversive' behavior and ideas that justified the police surveillance and allowed for further investigation.