"It is time our Police Commissioner stopped protecting those officers who disgrace him, their uniforms and the department. The function of the police department is to protect the public and not the police" -- Rev. James Wadsworth, Detroit NAACP President, Sept. 12, 1964

Barbara Jackson asked the Michigan Chronicle to document her injuries (from Sept. 5, 1964 edition) 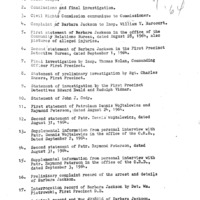 Barbara Jackson, a 22-year-old African American woman from Detroit, was severely beaten by two white police officers on August 24, 1964, after being arrested for soliciting prostitution and alleged larceny. The incident happened just over a year after the police murder of Cynthia Scott and illustrated the continued racial and gender violence that Black women in Detroit, and sex workers in particular, suffered at the hands of white police officers. Patrolman Raymond Peterson and his partner were transferring Barbara Jackson to the precinct station for booking when she cursed at John Cody, a white man (the "john") who had falsely accused her of stealing his money after the police officers encountered both of them, arrested only Ms. Jackson, and took Cody along for the ride so that he could file charges against her. Inside the precinct parking garage, Peterson said, "bitch you're going to the hospital," slammed Jackson's face into the concrete, kicked her repeatedly while she was on the ground, and then picked her up and smalled her head into a brick wall.

Barbara Jackson immediately filed a complaint against the two DPD officers, Patrolman Peterson and Patrolman Dennis Wojtalewicz, the beginning of her long and extraordinary crusade to achieve justice and bring the violence and brutality of the DPD officers to light. The Detroit chapter of the NAACP demanded a full investigation and championed her cause, likely in response to the accusations of Black radical groups that the city's leading civil rights organization had been reluctant to intervene on behalf of Cynthia Scott because of her status as a "known prostitute." The Detroit Police Department also criminalized Barbara Jackson as a "known prostitute" and a violent and dangerous person throughout the internal investigation by the Commmunity Relations Bureau, which covered up the actions of the police officers and concluded that Jackson's injuries were either faked or not serious and "the direct result of her un-cooperative and unreasonable behavior." Police officers from the First Precinct, where the incident had occurred, also illegally arrested Jackson during the course of the investigation and interrogated her for four hours in an effort to coerce her into withdrawing her charges, but she refused to change her story.

After the DPD exonerated the white police officers, Barbara Jackson requested that the recently established Michigan Civil Rights Commission (MCRC) conduct an external investigation into the violation of her civil rights under the 14th Amendment. She also asked the Detroit office of the Federal Bureau of Investigation to launch an inquiry into the DPD and its coverup of the violation of her civil and constitutional rights. The NAACP assisted her throughout the MCRC investigation and also located a key eyewitness, an African American sheriff's deputy who had witnessed the attack and confirmed her version of events, despite his fears of retaliation for breaching the "Blue Curtain" code of silence and testifying against other law enforcement officers.

On April 27, 1965, in a landmark ruling, the Michigan Civil Rights Commission announced its findings that the Detroit Police Department had discriminated against Barbara Jackson based on her race and therefore violated her civil and constitutional rights. The Jackson verdict, along with two others involving Black citizens from Detroit announced simultaneously, represented the first completed police brutality investigation by the new agency. Despite its findings, the MCRC lacked enforcement power, and the DPD responded by continuing to cover up what really happened and acknowledging only that the two officers had violated the police training manual by failing to properly restrain their prisoner, causing Barbara Jackson to injure herself while allegedly trying to escape. The DPD gave the two officers written reprimands, a very mild form of internal discipline considering their guilt in a felony criminal assault, and transferred them to a different precinct. This failure to punish violent and criminal police officers had tragic consequences, not least because Patrolman Raymond Peterson went on to compile a long track record of brutality against other Black citizens and ultimately participated in the killings of nine African American males, including one that led to prosecution for murder, during the DPD's undercover STRESS operation from 1971-1973.

Barbara Jackson's courageous battle against police bruality and remarkable quest for justice is a crucial, and too long forgotten, milestone in the history of the civil rights movement in the state of Michigan. Readers can explore her saga, and the DPD's whitewashed internal inquiry, in more detail in the investigative file of the Community Relations Bureau at right, obtained from the Mayor Jerome Cavanagh records at Wayne State University's Reuther Library.

The Policing and Social Justice HistoryLab also has published a multimedia investigative report about Barbara Jackson based on these investigative documents and other materials, written by undergraduate researcher Lily Johnston and linked below. (This embed works best in Chrome; if technological difficulities arise, or to access the report directly, follow this link).