"Some serious charges have been made by citizens about the treatment they received from the police during the recent riots. Each of these claims will be thoroughly investigated"-Mayor Jerome Cavanagh, August 4, 1967 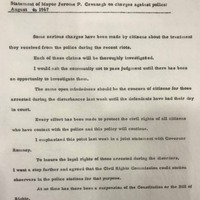 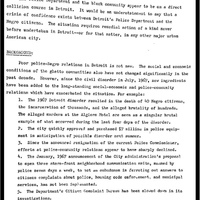 African American civilians filed hundreds of complaints of brutality against the Detroit Police Department, and also a number against the Michigan National Guard and Michigan State Police, for mistreatment and misconduct during the 1967 Uprising. The formal complaints represent only a fraction of the actual incidents that occurred during a chaotic six-day period when the formal discipline of both DPD officials and the National Guard broke down. Many complaints did not identify individual officers by name, because most on the DPD force removed their badges and other identifying information for the duration of the Uprising, as the Kerner Commission's investigation found. Many other civilians did not file complaints because they did not know the names and badge numbers of the officers involved, and/or because they knew from experience that the DPD's internal investigative process would cover up or dismiss their allegations of brutality and misconduct.

Mayor Jerome Cavanagh first praised the DPD for having "responded magnificently" to control the race riot and then, under fierce criticism from civil rights groups, promised that every complaint of police brutality and misconduct would be 'thoroughly investigated" (right). The promised investigations did not happen, as the Michigan Civil Rights Commission observed seven months later (second document at right). The Citizens Complaint Bureau processed zero allegations during the year after the Uprising. Cavanagh also stated that "every effort has been made to protect the civil rights of all citizens who have contact with the police," words that assuredly rang hollow for many black residents of Detroit. It is also revealing that Mayor Cavanagh felt the need to clarify that the U.S. Constitution and its Bill of Rights had not been suspended during the state of emergency (right).

This interactive map is a data visualization of 46 civilian allegations of police brutality and misconduct during and right after the Detroit Uprising of 1967. Note that there are far more complaints from the West Side of Detroit, which the DPD and the Michigan National Guard jointly patrolled, than from the East Side, which the U.S. Army occupied. Almost all incidents were reported by African American residents of Detroit to the NAACP or to the office of Rep. John Conyers. The map captures only a small fraction of actual police-civilian encounters during the 1967 Uprisings. A few allegations are about National Guard and Michigan State Police units. Hover over the dots to see the victim name, law enforcement unit, and incident description. Legend: 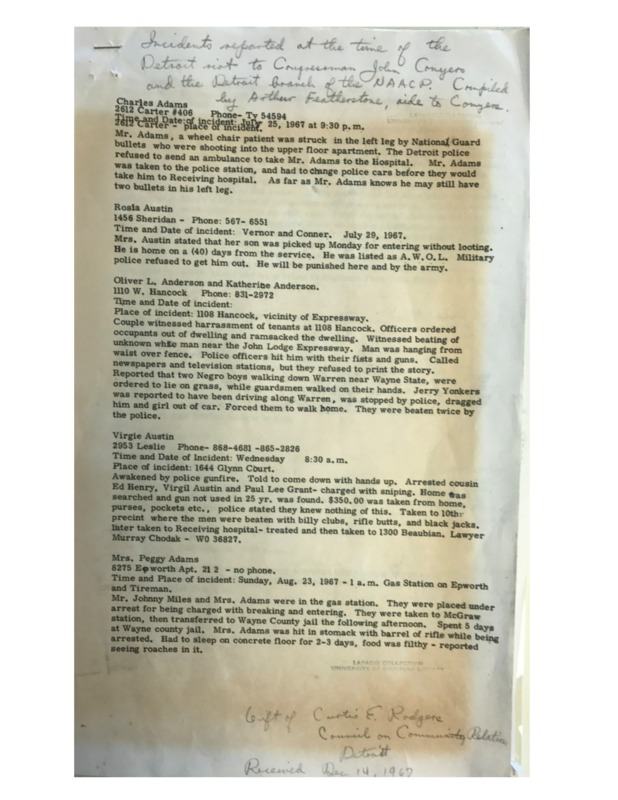 The research team created this map from the document to the right: "Incidents Reported at the Time of the Detroit Riot to Congressman John Conyers and the Detroit Branch of the NAACP" (click on the document to view the full version). The Detroit Commission on Community Relations compiled this list and forwarded it to Congress and the Kerner Commission as part of the investigation into the role of the police in the civil unrest in Detroit.

The research team categorized the nonfatal incidents in this report as either police brutality or police misconduct, with police corruption and political repression as subsets of police misconduct.

We defined police brutality as an incident in which law enforcement officers used physical force against civilians without apparent justification, meaning not in self-defense. In many cases, police beatings were so severe that the victims required medical attention. For example, Frank Buffin had to be hospitalized after police officers beat him while he was attempting to catch a cab. In many cases, police beat African American civilians after accusing them of looting or being suspected snipers, and officers often used abusive and racist language and destroyed their property as well.

Police misconduct is an umbrella category for wrongful arrest/detention and other incidents that did not involve direct physical abuse. Subcategories of police misconduct include investigative arrests (no probable cause), indiscriminate mass arrests, warrantless home invasions and destruction of personal property, discretionary harassment, and the use of racial epithets. This type of police altercation seemed to have no common provocation and appeared to victimize African Americans in their everyday lives.

Police corruption is a subcategory of police misconduct that involves law enforcement taking a part in clearly criminal activity. (Police brutality and misconduct are also illegal, but rarely investigated at the time). For example, in one July 23 incident, a witness reported seeing officers looting a store. Other complaints accused officers of stealing personal property from people they illegally searched.

Political repression is another subcategory of police misconduct. The defining characteristic is surveillance, criminalization, and retaliation against people who promote political views that are in opposition to the power of law enforcement. For example, Peter Werbe, the editor of the radical newspaper The Fifth Estate and the only white resident of Detroit on the list, accused DPD officers of uses the unrest as cover to bomb his newspaper's office. Another complaint accuses the DPD of targeting people at the church of Rev. Albert Cleage, a prominent black radical.

Graph showing the breakdown of incident categories in the Conyers/NAACP report.