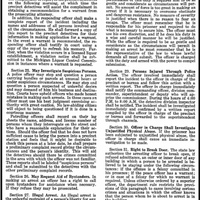 DPD Manual: Policy on Use of Force in Making Arrests (1962)

Commissioner Edwards issued a revised Detroit Police Manual in 1962. In the introduction, Edwards wrote that "in the exercise of their duties, police officers must be unprejudiced and impartial in their decisions" and that officers should "exert no more force than is absolutely necessary to effect his legal purpose and duty." According to the 1962 policy (full policy at right):

"The state requires the officer to perform his duty regardless of hazard, but in the performance of this duty it requires him to be as gentle and considerate as circumstances will permit. No amount of force is too great in making an arrest if it is necessary to overcome obstinate and dangerous resistance. No measure of severity is justified when there is no reason to fear an escape"

This map shows the reality. In terms of the actions and discipline of police officers on the street, very little changed. Under Cavanagh and Edwards, there were fewer complaints about police brutality in the business district along Woodward Ave., but more in the African American and racially transitional neighborhoods on the East and West sides of the city. In particular, the patterns of police brutality allegations in the early 1960s reveals an increasing number of cases involving African American youth in their teens and early twenties.

Map of Police Brutality under Conservative and Liberal Mayors

The sampling on the above map is drawn from the all-incidents map created by this research team for the 1957-1963 period and included here for comparative purposes, as well as in the first sub-section of "Civil Rights and Police Brutality."

This map displays 72 allegations of brutality and misconduct by African American citizens against the Detroit Police Department between the years 1957 and 1963, located in the city's racial geography and documented through archival and newspaper research. The map also includes police killings of civilians. Click on each point to see the name of the victim, date of the incident, and a description.

Map of All Police Incidents: Brutality, Misconduct, and Homicides of Civilians (1957-1963)