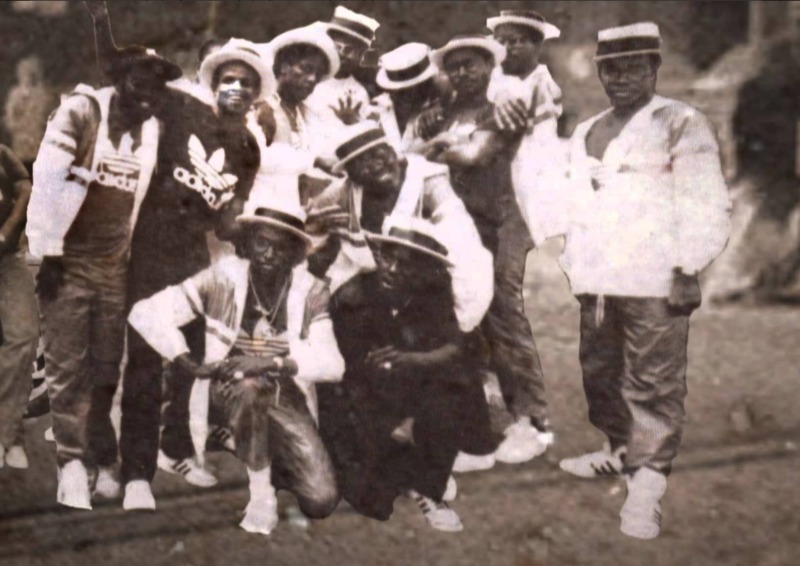 Members of the Young Boys Incroporated. 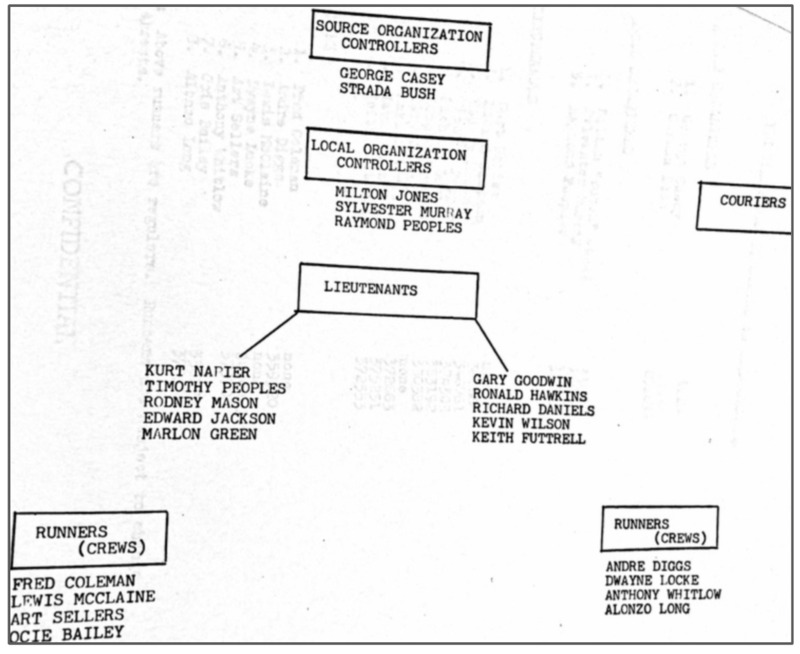 The structural and hierarchical structure of the Young Boys Inc.

Young Boys was an extremely well-organized gang. At the top were the four founders of YBI, Dwayne "Wonderful Wayne" Davis, Milton "Butch" Jones, Raymond "Baby Ray" Peoples, and Mark "Block" Marshall. Ultimately, Butch Jones, the most militant out of the four, became the de facto leader of the entire gang after getting out of prison. The other three leaders were responsible for sourcing the group's heroin from the "Golden Triangle", the border of Laos, Thailand, and Myanmar.

The name Young Boys Incorporated lent itself to the idea that this group was like a company. When it came to the actual organization of the gang, Butch Jones was largely responsible. In the newspapers, the group was seen as highly effective because of its structure as a vertically integrated system. Its setup was described as a "military-like organisation chart for narcotics conspiracy" by federal agents (Joint Hearing on National Drug Strategy).  There was the inner circle, which consisted mostly of the founders of YBI and their lieutenants. Then, the lieutenants were responsible for having runners. These runners were, in the case of YBI, oftentimes minors that were looking to make money on the side. The strategy of using minors made YBI extremely powerful and difficult to takedown. Federal law enforcement in a hearing with members of Congress discussed the success of this tactic, "Because most of the members of the organization were minors, efforts to penetrate and disband the group met with little success," (55, Organized Crime - Federal Law Enforcement Hearing). Many young people in Detroit were attracted to the idea of YBI because it was a quick and relatively easy way to make money. The youth in YBI were able to afford expensive cars, jewelry, and clothes. They were not afraid to show off the successes that they were able to have because of their part in the gang. People in YBI were known to wear Max Julian jackets, which was also known as the "Young Boy jacket" (Joe Swickard).

However, not all life with Young Boys was about the money and successes from dope dealing. The "wrecking crew" managed by Jones was the enforcement of the gang. Most teenagers involved in the gang could not just leave unless they left town, and the wrecking crew made sure that this message was clear to everyone working for Young Boys. Violence was inherently part of the Young Boys organization, as it was a way of keeping the young boys in line. It was common to hear that competitors of the organization were killed in gang violence because Butch Jones did not want YBI to have any competition.

The products of YBI were branded different names that made them marketable (Butch Jones's Autobiography).  Jones claimed in his book that he would test the products with users that were known to him who could vouch for the quality of the products. It was a rule within YBI that the lieutenants and anyone in the crew was not allowed to touch the products. This allowed them to stay sober and attentive to anything happening around them. Overall, YBI functioned similar to any large corporation we see today with the exceptions that the product that they sold is an illegal substance and that there was violent retaliation for any movement against the gang. 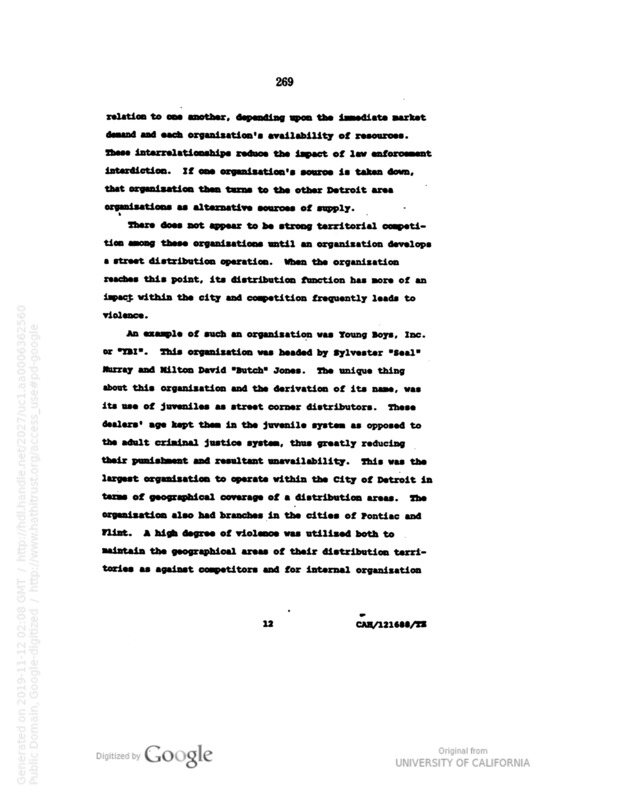 The federal opinion on YBI's organization. 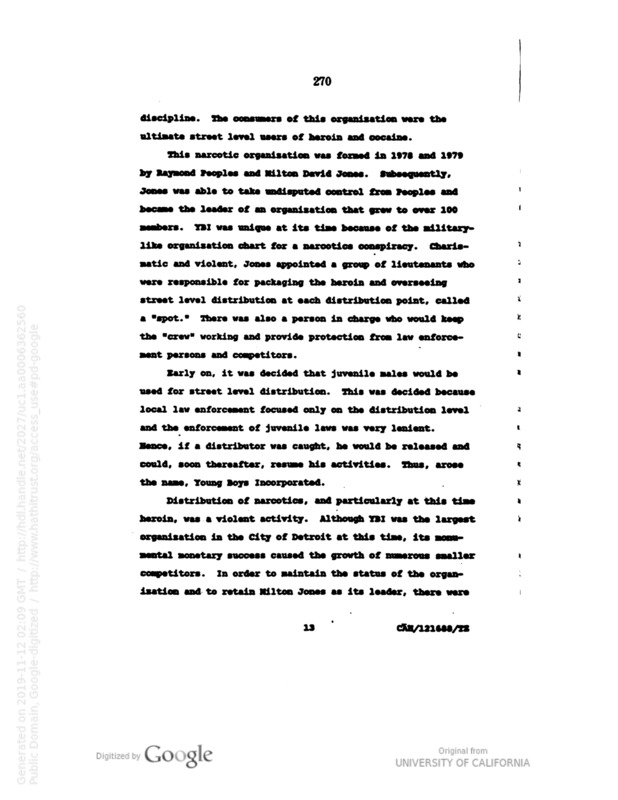 The federal opinion of YBI's organization. 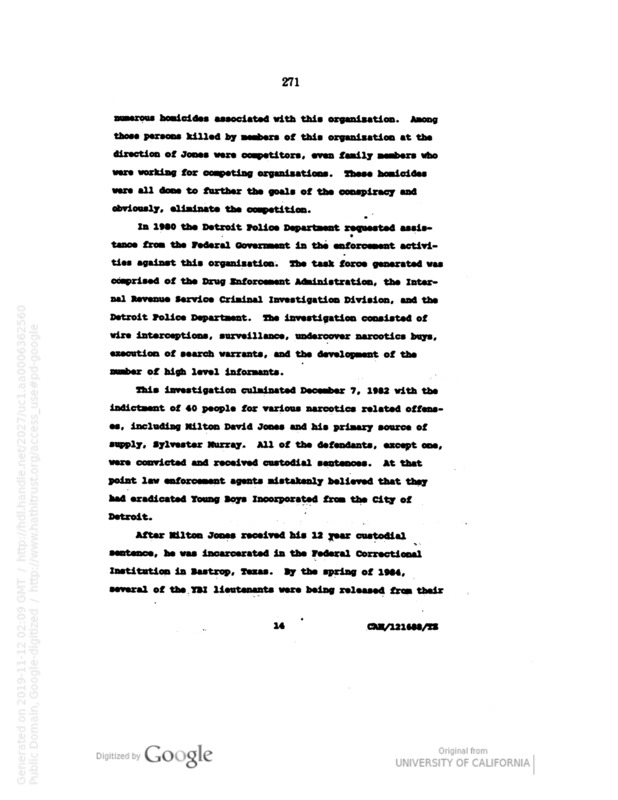 The federal opinion on YBI's organization.

Film clip from movie made about Butch Jones.

The map of YBI properties shows the expansive reach of the organization across Detroit. Many of the different properties of the organization were on the west side of Detroit which is where the majority of the city's black population resided at the time. It is possible that all of YBI's properties were in one condensed area because of turf wars with smaller gangs.

The properties idenoted on the map are important because it shows YBI's sophisticated method of avoiding police detection. YBI worked to keep drugs, distribution, and money all in separate locations. Leaders like Butch Jones and Seal Murray had many properties to store their money, so, if they were raided, they had other stores of money that could continue to support their families. The ability to provide well for one's family was one of the main appeals of membership. Many also saw gang membership more generally as a way out of the cycle of poverty.

Passed in 1973, the 650 lifer law for drug posession was one of the toughest measures taken on crime that nation had ever seen. The law resulted in lifetime prison sentences, at times with no opportunity for parole, As of 1998, more than 220 individuals were serving life sentences in prison under this legislation. The law was also reformed to change the mandatory life sentence to "life or any term of years, not less than 20 for future 650-lifer" and providing opportunities for parole within two years for future offenders. While the laws were changed significiantly over the 20 year period but accroding to the National Drug Strategy Network, it was still "one of the harshest drug laws in the U.S" with penalties exceeding that of second degree murder. This law's primary focus was to target drug kingpins, however, around this time, Raymond Peoples and some of his friends were coming up with the idea of a new type of gang. Young Boys Incorporated eventually formed in 1978 and it was led by Raymond Peoples, Butch Jones, Mark Marshall, and Dwayne Davis. Their idea: get younger kids, who could not be prosecuted in the same way as adults, to deal the drugs. YBI wanted to break out and get their drugs from a different source. Previously, in Detroit, most of the gangs and groups had sourced their drugs from the Italian mafia, La Cosa Nostra (LCN). Butch Jones had the idea to get their heroin and drugs from elsewhere because they did not want to be reliant on LCN. The hierarchy of YBI was such that the youths were in charge of the street dealing, but the four founders were in charge of the whole operation, which was run much like a large corporation or even the military. The new organization of YBI allowed it to net, according to federal authorities, nearly half a billion dollars in the year 1982. 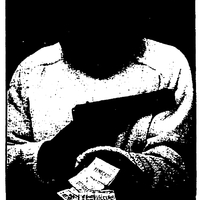 Detroit Free Press shows an unknown member of YBI with a gun and the drugs they sold.

YBI represented a change in gang structures all across the country. Juveniles became a way to avoid the law.  Young black men were automatically associated with being gang members ("The 'New' Gang"). The Detroit Police Department asked for federal agencies to become involved in taking down YBI in 1980, but the idea of being a gang member remained in many young peoples' minds. The public also developed a general distrust and overall hysteria over the threat of gangs in the city. Because of how YBI redefined what gangs were, any child or adult could be dangerous because of his or her possible involvement in a gang.

The newspaper headlines and images below provide a window into the shock and fear in the community througout the late 1970s and early 1980s. The idea of violence, addiction, and death were correlated with YBI in the media. Many other organizations began cropping up as YBI gained headlines for the amount of money that they were making. Alongside this emphasis on money and gangs, there was a fear of young, black youth generally, regardless of gang affiliation. This also contributed to the rise of YBI and the federal and local offensive on gangs. In an interview with former Detroit Free Press reporter, Joe Swickard, he said in the beginning of the 1980s in Detroit, "[there were] guns and drugs raining out of the sky".

Additionally, one excerpt from a Joint Congressional Hearing on Narcotics and Youth, states that being a member of YBI was a "status symbol" for black youth in Detroit. It is reported, however, that alternatively youth saw YBI as a quick way to make money and break endless cycles poverty.

Gimlet Inc. Crimetown, Episode 5, "YBI to the day I die."