Who was Butch Jones?

Milton "Butch" Jones was one of the founders and the de facto leader of Young Boys Incorporated (YBI). He grew up in a life surrounded by drugs, murder, and violence. In his autobiography, Jones details his first murder where he was hired to murder another man and emptied an entire clip of a gun into the back of a him.  Jones talks about how his circumstances of poverty and in drug sales led him to starting Young Boys Incorporated. Jones collaborated with Raymond "Baby Ray" Peoples, Mark "Block" Marshall, and Dwayne "Wonderful Wayne" Davis in 1978 to execute his plans for the organization.

Jones describes his desire to start YBI as a way to have an organized crew in order to make money from illegal activities more efficiently. Butch Jones was in charge of enforcing the gang's rules, and he did so with great enthusiasm. As with many drug leaders who started large drug empires, Jones thought that he was untouchable, yet he still believed that he should be smart with the way that YBI operations were run.

Butch Jones and the city of Detroit

Jones had extensively dealt with the Detroit Police Department. In his book, he mentions that there was one cop that he was particularly afraid of, Rudy Davis. He goes into detail on Butch Jones alleged that Sergeant Davis was one amongst many in the DPD that would seize his dope, guns, or money and "just walked out the door like the shit belonged to him."  In this instance, Jones alludes to his admiration for cops like Davis within the Detroit Police Department that were corrupt and would often seize money or other items for themselves  in a raid (Forfeiture Scandals). Throughout his book, Jones attempts to justify and explain his reasoning for being invovled in crime.

Jones was able run YBI and turn it into a business that operated smoothly and effectively and dodged federal and local law enforcement simultaneously. Following Jones's arrest and the takedown of YBI, Jones was sent to prison in Texas where he managed to continue some operations of YBI until 1984 through his wife Portia who lived and worked in Detorit througout his imprisonment.

Federal Reaction to the "New" Gang

With the presence of Young Boys Incorporated and the Pony Down Crew the federal reaction to this type of organized increased significantly in the 1980s. The DEA and FBI had a presence in Detroit because of investigations into these gangs. This is when the association between being a black youth and a criminal increased. The Joint Congressional Hearing on Narcotics and Youth clearly associated the black youth with criminals. The report stated that "kids are gun carrying criminals who will kill to protect their individual street corners." The report expands on this later, "ask a inner city black youth what he wants to be in the future, and don't be surprised if he says, "a major drug dealer." This demonstrates how the federal government viewed black youth, especially in light of the rise of organized gangs like YBI. 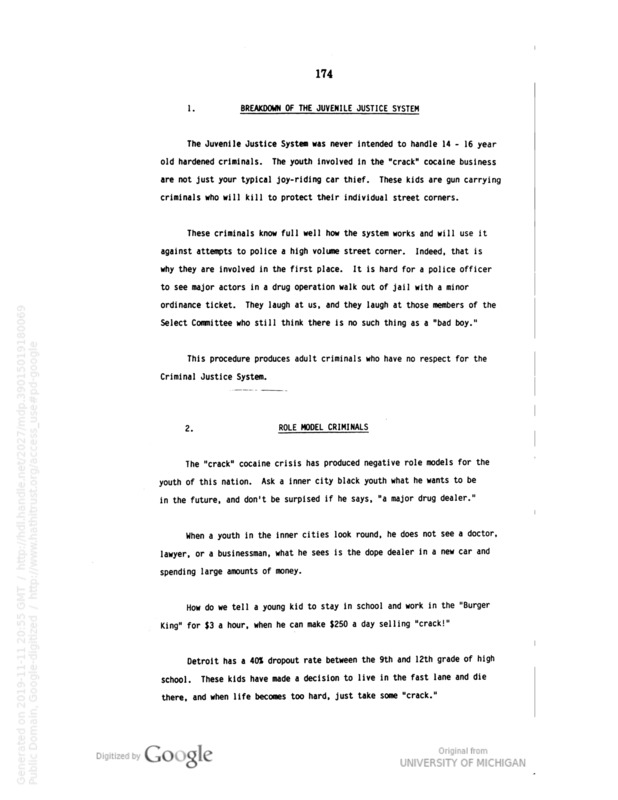 Data and statstics on the Federal Association of Youths as Criminals from the Congressional hearing on Narcotics and Youth in July 1986.

The Pony Down crew started around the same time as YBI by Leroy "Gun" Buttrum. The crew, according to Chief Hart's records, was the gang, in addition to YBI, in Detroit in 1982. When YBI was taken down, that gave pony down city wide influence. Their name came from the fact that they wore Pony's; an expensive designer-style shoe. Buttrum used a similar organization for Pony Down to YBI as many of the members of Leroy Buttrum's inner circle were family members, including his brother Tony "The Snake" Buttrum.

A Detroit Free Press reporter described Pony Down's influence as extremely powerful in the city. When a smaller, rival gang kidnapped Tony Buttrum's daughter, the reporter described an exchange between the kidnapper and the Detroit police to get Buttrum's daughter back, Tony Buttrum handled the situation independently of the police. Buttrum allegedly drove in, got out of his car with a gun and shot down the kidnappers to take his daughter back. The police, allegedly, did nothing. This is just one example of the power different drug rings in Detroit at the time held. Similar to YBI, the Pony Down crew gave catchy names to the different types of drugs that they sold. Federal agencies investigating Pony Down speculated that there was more crime within the gang because they tended to use older runners than YBI. Additionally, the group was less organized than YBI which led to conflict between members of the group.