These findings represent only a fraction of the evidence surrounding occurrences of police misconduct. From the Detroit Police Department’s 1982 Annual Report alone, there were 855 “formal” complaints filed against police officers. Of that 855, 311 were investigated by the Professional Standards Section, 62 by the Chief Investigator’s Office, and 482 by other departmental sections not enumerated by the department. Meanwhile, the Internal Affairs Section rejected 320 of its 424 allegations of criminal misconduct by police officers as “insufficient.” of the 104 cases taken, 56 were found to have taken part in misconduct or criminality.

The disparity between the DPD's report on complaints and the Ombudsman is unknown. What is clear is that there are far more citizen complaints that have not been found. Regardless, it is important to note that "formal" complaints are not a good indicator of the true amount of police violence and misconduct that occurs. Most instances of misconduct are never reported, providing silences in the archival record.

It is important to note the unfortunate truth that the collection of all the stories of those affected by police violence will either never surface, or had never existed in the first place. To "call the police" is not, and was not, as easy a thing to do for African-Americans and minority groups living in Detroit as it was for the white population of the suburbs that border the city limits. In the Reuther Archives, many complaints come from citizens living in suburban areas that did not necessarily have higher rates of crime than in the city. During this time, the white population grows increasingly anxious of the issues of crime and race in the City of Detroit. As the population becomes more spatially segregated, it becomes more common for white citizens to report crimes and suspicious behavior in their areas as a caricature of black crime in Detroit is broadcasting into white suburban homes.

"The Blue Code of Silence"

An obstacle for research on instances of misconduct is the endemic predisposition of police departments and individual officers to defend their own. This characteristic exists in organizations other than police departments, but is reinforced by the inherent dangers of police work. Jerome Skolnick's research article contains the findings of commission reports created by cities such as New York and Los Angeles to investigate the extent of this trend in the wake of incidents such as the 1991 police assault on Rodney King. The commissions found that an unwritten code of silence and loyalty permeates testimonies when police officers' actions are scrutinized for possible criminality. Warren Chrisopher, who headed the Los Angeles Christopher Commission after the beating of Rodney King described this code of silence,

"Perhaps the greatest single barrier to the effective investigation and adjudication of complaints is the officers’ unwritten ‘code of silence....' the code of silence influences the behavior of many officers in a variety of ways, but it consists of one simple rule: an officer does not provide adverse information against a fellow officer."

There are numerous factors that contribute to police officers' willingness to lie or omit information in defense of their colleagues: loyalty, a fear of retribution, or creating a system of "snitching and counter-snitching," on each other's immoral or illegal activities. This system is further reinforced by the culture and dangers of police work, which a contemporary Detroit Free Press reporter described as a mindset of “the ‘us versus them’, the ‘you don’t know what I put up with.’” Reportedly, a state prosecutor would joke about police officers' testimonies by exclaiming in court "Bring out the defendants and let the perjury begin!" The "blue code of silence" constructed a barrier that muddied the difference between truth, the ommission of truth, and lies when assessing the validity of an officer's testimony. Since this code of silence was not limited to the defendant (if an officer were accused of misconduct), one could reasonably expect that officers who witnessed the incident would be subject to the same code. This presents a problem when analyzing officers' testimonies and the outcome of case involving charges of police misconduct; moreover, it lays the groundwork for officers who are repeatedly accused of misconduct of brutality to remain in the force for many years. [See, IN-FOCUS: Officer Pongracz]. 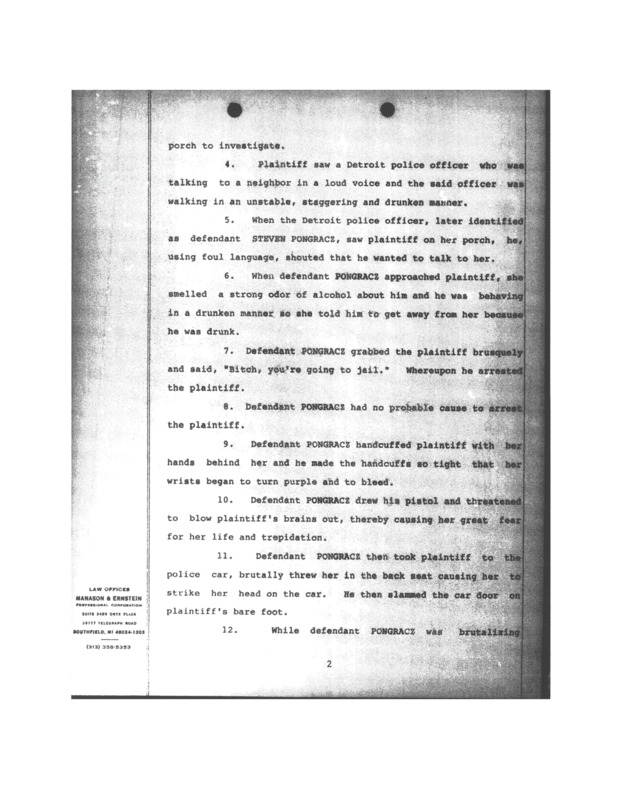 "Bitch, you're going to jail."

It was not until 1985 that the Supreme Court finally ruled in Tennessee v. Garner that police officers could only use deadly force if they have probable cause to believe that the suspect poses a significant threat of death or serious physical injury to the officer or others. Before this landmark decision, many states, including Michigan, followed the common law precedent that granted officers the ability to use deadly force if a suspect was fleeing the site of a felony. Michigan and nine other states followed the “any felony” rule, virtually allowing a person to be killed for being suspected of committing any felony, regardless of whether the crime was violent or if the person posed a threat to anyone else.

In the case of Theoderic Johnson in 1981, police shot Johnson on the grounds of larceny; however, larceny was only a crime in the State of Michigan if the person had stolen over $100 in valued goods. The killing was ruled to be justified on account of the crime having been designated as a felony, despite Johnson only stealing meat, which was highly unlikely to be valued over $100. Furthermore, Johnson dropped the meat before he fled the scene but was shot by police in pursuit.

Although this was the law in Michigan, the DPD's procedures and practices were distinct from the greater Michigan law enforcement community. While the Michigan State Police followed more "relaxed" common law and state law standards for deadly force, the Detroit Police Department were only permitted to use deadly force against someone suspected of “certain enumerated, ‘dangerous’ felonies.” Meanwhile, suburban police departments like Hazel Park, Madison Heights, and St. Clair Shores followed the less-stringent state law. This disparite was a result of the DPD's goal to revive its image and relationship with the community after the racial tumult of the 1960’s and 1970’s. Through our study of cases of police homicides, we hope to find that this was this case.