Police brutality between 1986 and 1989 took on many forms. From physical and verbal assaults against suspects or people in custody to sexual and gender-based violence, the Detroit Police Department was, without a doubt, fraught with the issue of unjustified misconduct against civilians. Operation Crack Crime, a program whose mission was significantly centered around raids and assaults on presumed crack houses and drug dealers. This led to a movement from misconduct taking place primarily on the street to

Another change to policing in this time period was the decision of Tennessee v. Garner. In 1985, the Supreme Court ruled it unconstitutional to shoot a fleeing suspect in the back. This added a newfound level of caution needed by police officers, likely reducing the number of incidents of homicide or shooting related incidents.

Although the effects of affirmative action led to the introduction of more female and African American officers, this did not necessarily mean that there was equal treatment for all parties. The consequential variety of police misconduct resulted in sexual harrassment and racism against fellow officers. One such incident took place in 1987, at which time Cheryl Preston, a married, African American police officer (and mother of two) filed a lawsuit stating that she had been sexually harrassed in her short time working for the Detroit Police Department. In the suit, Preston stated that one of her superiors had suggested that she sleep with him in order to receive a promotion. When she declined, he began to frequently harrass her, even involving other officers in the abuse. Additionally, Preston stated that she had been groped by a different officer, leading her to "a complete emotional breakdown,"  for which Preston went on medical leave. However, the Detroit Police Department refused to pay for her time off, docking her nearly $3,000 in pay.  Cheryl Preston received $900,000 of the $7 million for which she had sued. Following the trial, Preston stated that female police officers are "treated like stepchildren," in the Detroit Police Department. 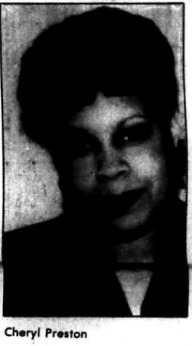