Law and Order, With Justice

In January of 1974, Coleman Young took office as Detroit’s First Black mayor. Young centered his platform on reforming police while running against the former Police Commissioner John Nichols.  The election followed arguably one of the most tumultuous eras in the city’s history. Before Young took office, the civilian trust of administration was markedly low. STRESS, the decoy cop operation of 1971-74 dubbed the “execution squad” resulted in a massive surge of police violence against Black people which scarred the local community and served as a detriment to civilian-officer relations.

Young ran on a platform of “law and order, with justice” playing on the former white moderate Mayor Cavanaugh’s slogan of “law and order.” Coleman Young critiqued the slogan as an empty promise — a moral veneer for the racist reality. He argued “law and order” alone was simply a guise to attack the Black community with operations such as STRESS, prioritizing the image of an aggressive crime-fighting policy over the safety of the Black population. Without justice, the notion of law and order is dangerously subjective. Young added to the slogan, acknowledging the importance of stability, but with the caveat that stability can no longer come at the cost of Black lives. Young moved to immediately abolish STRESS and he grounded his campaign in the search for justice.

However, true Justice for the Black population cannot coexist with “Law and Order.” They are directly antagonistic to each other. Law and Order is the language of the carceral model. Justice, in the mind of Coleman Young and others at the time, meant that all officers got punished when they acted violently, and the criminals, even criminal officers, served their “debt to society.” However, as John Wesley Donn and others assert, punishment is an ineffective mechanism to change human behavior. Justice can no longer mean punishment. “Law and Order, with Justice” was a broken promise from the beginning. The carceral model perpetuates racial violence. To be “tough on crime” does nothing to address the root cause of crime or challenge our notions of criminality. Far too often the “criminal” is coded language for an impoverished and young Black or Brown man.  The language of prison abolition and restorative justice existed for decades but it was not in the zeitgeist as it is today. The continued work of scholars and activists such as Dr. Angela Davis, Mariame Kaba, and Ruth Gilmore Wilson has only enriched our analysis of Detroit in the 70s.

Coleman Young, while a crucial figure in 20th century Detroit history, is not to blame for the continued police violence or his inability to keep his promise. Every attempted reform, regardless of the source, would be insufficient. Coleman Young was once a radical activist that became swept up in the system, and as such he partnered with moderate white elites and attempted to work within a system that gave him power. Justice, in the sense of Black Liberation and the end of the carceral model exists outside of the system. It required and continues to require radical change in how we work through conflict, support our communities, and perceive criminality. “Law and Order, with Justice” expresses two inherently antagonistic ideas, and this dissonance serves as a framework for Mayor Young’s first term and the attempted reforms passed by his administration.

Excitement or concern were the dominate reactions to Young’s victory. Young’s supporters were excited at the prospect of genuine reform while the same prospect struck fear in the officer corps. The campaign was bitter and largely divided along racial lines. John Nichols campaign manager admits that his entire agenda was around "securing the white vote." Due to the continuation of "white flight" the city's racial demographics were in flux.   [for visualization of the demographic shift, click here]. While the city was nearly half Black at this point, the city was still patrolled by a majority white police department. Young's victory follows in the national pattern of Black mayors leading with a white police force.  The failure of the department to mirror this demographic shift is believed to contribute to the level of police brutality and misconduct. As such, one of Coleman Young's contested reform proposals was an increase in Affirmative Action efforts. [For more on this policy click here].  While the previous mayor, Gribbs began the process, it was heavily expanded under Young. His adamance on its implementation led to further backlash from the DPOA. The DPOA was gaining strength, grounding their anger in Coleman Young's purported attempts to reform the department. Racist, white officers felt they were losing power as rights were being expanded to Black officers.  Any and all liberal reformers and administrators were created as antagonists to officer autonomy.  The election was bitter and the campaign was highly racialized. In turn, upon Young's victory, he faced polarized reactions.  The public largely understood the divide to be racial — Black people supporting Young and the whites population against him.

In his autobiography, Coleman Young challenges the simplification. He believed that any law-abiding citizen hoped to see a drastic reduction in crime in the city, and welcomed the aggressive reforms that such a result may require. That said, according to Coleman Young’s observations, up to the contemporary moment police were equally if not more terrifying than the city’s crime rate for Detroit’s Black population. Even the most excited civilians were still recovering from the instability of the previous decade. The 1967 events were still fresh, STRESS was only just abolished. The city was still mourning and it required reorganization of the police department and civilian complaint system in order to build from the instability.

Within the Michigan Chronicle, several pages of the January 1974 issue were dedicated to the community reactions and commentary to Young’s election. The pages were full of impassioned poetry and op-ed pieces on the meaning of Young’s victory to them personally. The excerpts selected are emblematic of the hope of the time, especially among the Black community. Of course, this is a generalization that is complicated by opposition towards Young and doubt he will fulfill his goal of “unity” but this is to give a general mood as described by the papers. It’s important to note which papers we have access to and which voices are being published. The Michigan Chronicle offers an upper-middle-class moderate perspective. They represent a subsect of the population, and often not the faction most affected by police misconduct. As such,  the more radical left Black papers were less optimistic. This is a small sample of some of the dedication and excitement. 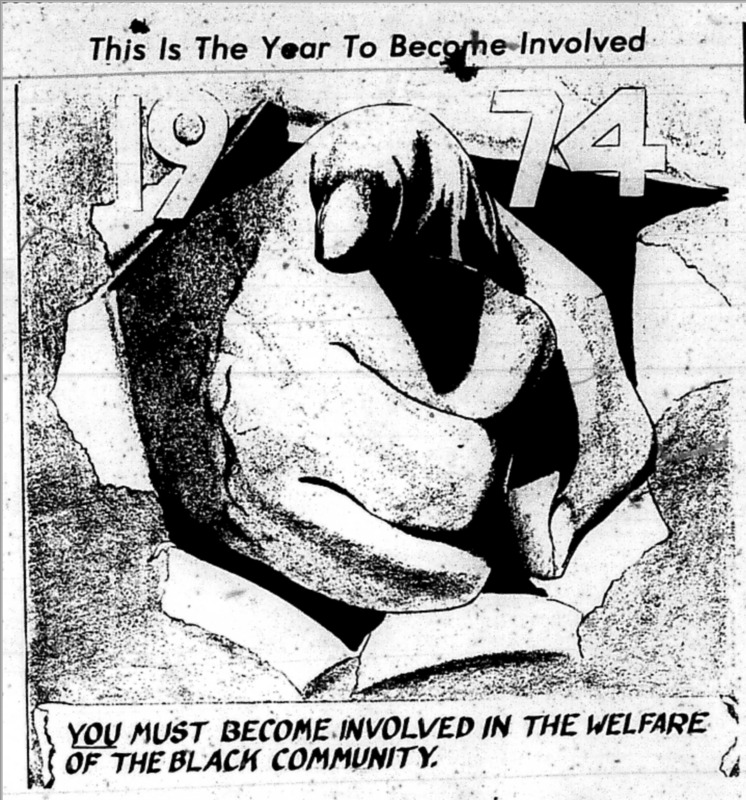 Cartoon from the Michigan Chronicle (1974) 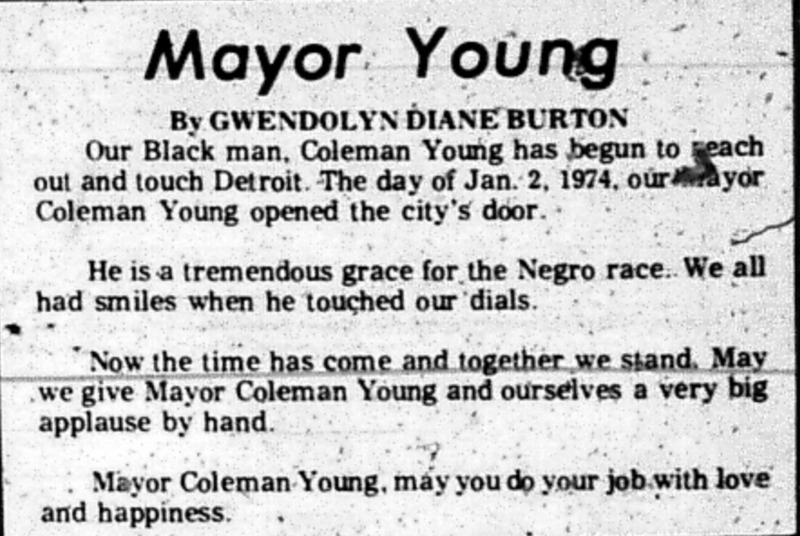 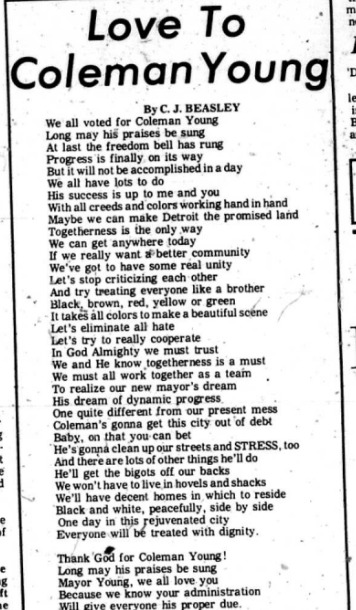 Sources for this page

Domm, John Wesley, “Police Performance in the Use of Deadly Force: An Analysis and a Program to Change Decision Premises in the Detroit Police Department”. Doctoral Dissertation, Wayne State University (1981)