Prior to Young Boys Incorporated (YBI), the gangs of Detroit primarily followed a structure and mentality of other types of organized crime. The Italian Mafia was a model used by many gangs and drug traffickers in Detroit and across the nation. There was a family-like structure within the groups where loyalty was the single most important aspect of the organization.

Prior to the rise of YBI, more traditional gangs held power over Detroit's drug market. Murder Row was started in 1974 as a subset of the Italian Mafia in Detroit. One of the founders of Murder Row, Francis "Big Frank Nitti" Usher had a close relationship with Anthony "Tony Jack" Giacalone, the leader of the Detroit Mafia. Generally, the mafia looked down upon black gangs, but Tony Jack and Big Frank Nitti had a sort of mentroship. Becuase of this, the Mafia supplied Murder Row's drugs. Chester Campbell, the gang's main enforcer, was arrested in 1975, which led to a power struggle. Murder Row could never fully fill Campbell's place, and the gang quickly lost its power. As a subset of the Italian Mafia, Murder Row functioned very traditionally with a hierarchy that was similar to that of the mafia's. This was very much unlike the newer gangs that followed Murder Row, which focused more on how to avoid the police rather than loyalty within the organization.  Before the YBI was established, juveniles were treated leniently by local law enforcement. If they were picked up, juveniles were immediately let out and were typically given lesser charges if any. 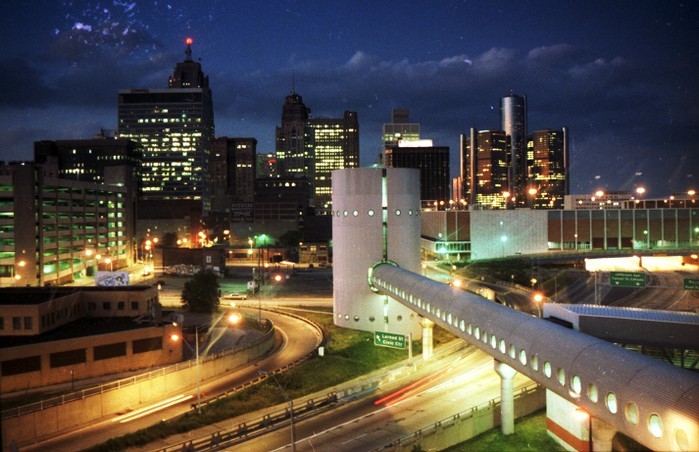 Drug Market during the 1980s

The two main drugs on the market during the early 1980s were heroin and cocaine. The impacts of a drug like crack or cocaine on the user are very different than that of heroin. Heroin made users relaxed and calm, while crack or cocaine made users energetic. Due to the rise in income for youth as a result of increased participation in gangs, the ability for youth to afford drugs increased as well. Young people could afford cocaine and heroin, and they had easy access to it. Additionally, as mentioned in the Join Congressional Hearing for Drug Control Strategy, the distribution of any drugs at the time were always violent. Any sort of competition increased the violence on the streets in regards to distribution.

The Rise of Gangs

Because of La Cosa Nostra, the Italian mafia, activity, there was increased federal law enforcement presence in Detroit. However, the Detroit Police Department requested additonal help when the presence of Young Boys Incorporated increased. The organization, as is explained in the next page, took advantage of the lenient laws for juveniles at the time as well as the way that drug market was with the decrease in Italian mafia activity.  The emphasis on using youth changed the direction of policing in the city of Detroit. As gangs began to use younger and younger people to sell drugs, youth became the central issue in fixing the drug problem. If the police could get these kids, who would otherwise avoid going to prison, it would decrease the amount of drugs on the street, a very punitive measure. YBI was the main innovator behind the idea of increasing youth involvement in the drug distribution network. There was a cyclical nature to it - the drug trafficking organization would use younger people and then the police would target people of those ages so then the gang would try to use even younger people.  However, it is important to distinguish the difference between the unorganized groups of youth and those that were part of gangs. The "runners" for gangs were given explicit instructions on how to behave and successfully sell the drugs.  As the amount of money in the business rose and the effective evasion of the police, being discreet about drug activities and its products (like money) became less commonplace with the rise of more organized gangs. 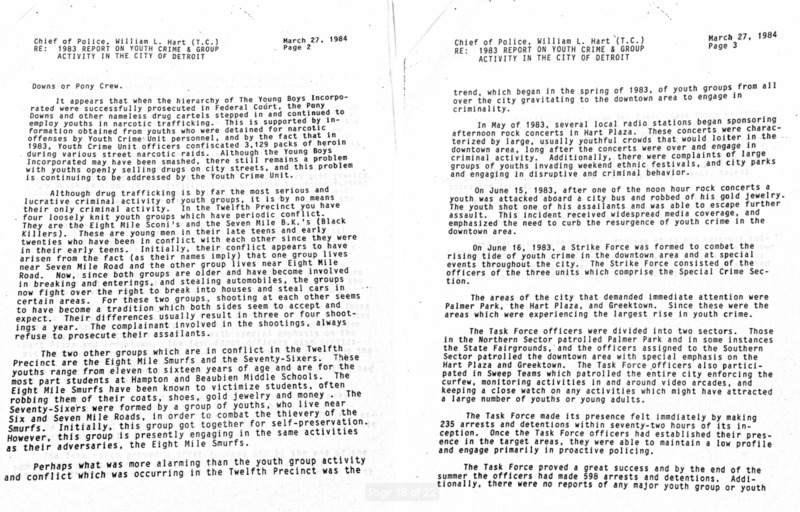 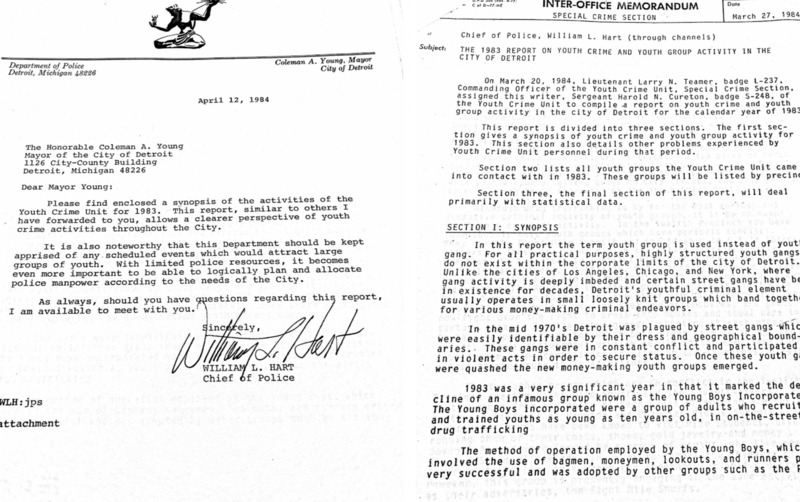 In April 1984, Detroit Police Chief William Hart sent a report to Mayor Coleman Young regarding youth crime activity in Detroit. Hart emphasized the short supply of police officers and recommeded that Young continue to be extremely vigilent about gatherings of youth in the city citing drug problems and increases in youth crime around the city. These reports included specific scenarios of youth crime, the creation of the Strike Force in 1983, and areas in need of increased attention including Palmer Park, the Hart Plaza and Greektown; all of which were predominately black areas. The task force made a shocking 233 arrests within its first 72 hours of its patrol. Hart referred to the task force program as "a gret success" and reported nearly 600 arrests and detentions by the ends of the summer.

Hart aimed to provide a "clearer perspective" on youth crime for Mayor Young through a series of reports, including the 1983 youth crime report. The report detailed individual reports of youth crime in the city, officer reports of specific youth crime groups and statstical data about youth crime rates and instances in the city. This report, sent to Young in April of 1984, served as the beginning of a crackdown on juvenile crime throughout the early to mid 1980s.

A Social History of America's Most Popular Drugs. PBS: Frontline.