Community Involvement in the War on Drugs

“We cannot sit back and wait on law enforcement agencies. The millions that the president and Crime Czar will be spending will never reach down to the drughouse on our block. This war can only be won by the people at the grassroots working together.”

-Clementine Barfield, Founder of Save Our Sons and Daughters, 1989

Save Our Sons and Daughters Newsletter 1989

Save Our Sons and Daughters (SOSAD) was founded in Detroit in the late 1980s as an effort to mobilize community members to fight in the local wars on drugs, crime, and youth violence. This group of mostly black parents aligned in part with the national community efforts that had emerged in years prior in response to similar issues, but further served to specifically represent the unique fears and interests of the urban subset. This coincided with other groups forming to address community interests as well and individual citizens voicing their concerns to their government officials. These efforts collectively expressed the increasing ground-level support for expanding law enforcement efforts and enacting more punitive policies. 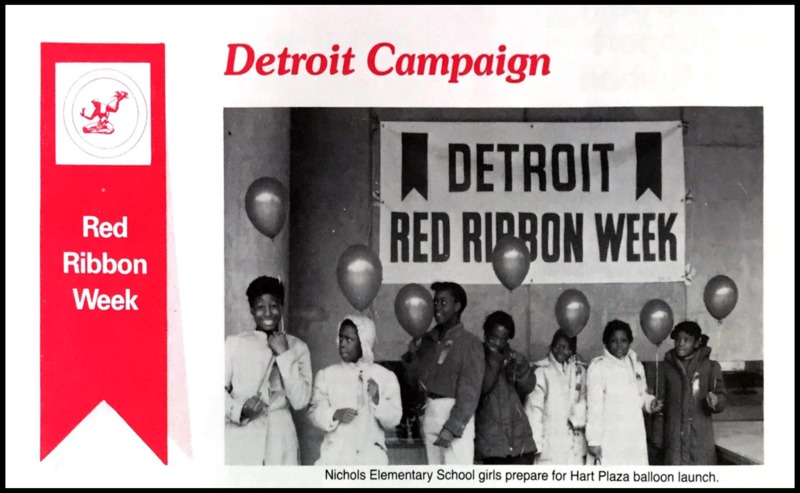 At a national level, the late 1970s and early 1980s saw a movement of parents forming organizations with the goal of ending drug and alcohol use and abuse among kids. Groups like the National Federation of Parents for Drug-Free Youth gained strength and influence rapidly amidst the hype of the War on Drugs, advocating for an increase in prevention and enforcement policies that would help curb the spreading of the drug plague. These organizations, primarily composed of white middle-class parents concerned about marijuana use among their teens, were able to influence the anti-drug legislation of the 1980s and the widespread narrative of the scale of drug abuse in America. The NFP was further able to extend its message through its annual sponsored Red Ribbon Campaign™, which saw events at the local level with the goal of connecting parents and communities with organizations, law enforcement, and legislators, all with the common goal of creating drug-free neighborhoods. Red Ribbon Week™ began nationally in 1985 in response to the death of DEA Agent Enrique Camarena as an educational campaign to raise awareness about the death and devastation that is caused by drugs in America on all levels. Detroit held their own Red Ribbon Week in 1988, as a part of their larger Substance Abuse Awareness Month with an honorary board of advisors including Mayor Young, Governor Blanchard, and local organization leaders overseeing activities.

While parents everywhere shared the underlying goal of protecting the health, success, and innocence or their children, black parents living in segregated inner-city neighborhoods had more imminent fears about the immediate safety of their families amidst rising drug-related violence. In Detroit, many citizens expressed concern over the safety of their neighborhoods and reached out to Mayor Coleman Young about the lack of security that they felt and their frustrations over their beliefs that they were being neglected by law enforcement. One anonymous resident wrote to Young, "I am terrorized every day of my life... the authorities are doing nothing to help us". This showcases the continuation of the over policing-under policing paradox that existed for many racial and economic minorities in Detroit. While the militarization of policing and discretionary tendencies prevailed, alongside this there was an equally harmful lack of involvement and response when afflicted citizens needed protection from law enforcement. There is further evidence of citizens writing to report areas that they believed to be crack houses or to contain other drug-related activities. One citizen drew a map, which he sent to Mayor Coleman Young, pointing out the houses in his area which he believed to be involved in crack production. These pleas to address the issue of under-policing come shortly after an anti-crime rally held in the summer of 1985 in which Mayor Young and Police Chief William Hart assured citizens that the force would be actively working to increase community engagement. Clearly, this was yet another promise of the Young administration that, in the eyes of Detroit residents, went unfulfilled in reality. 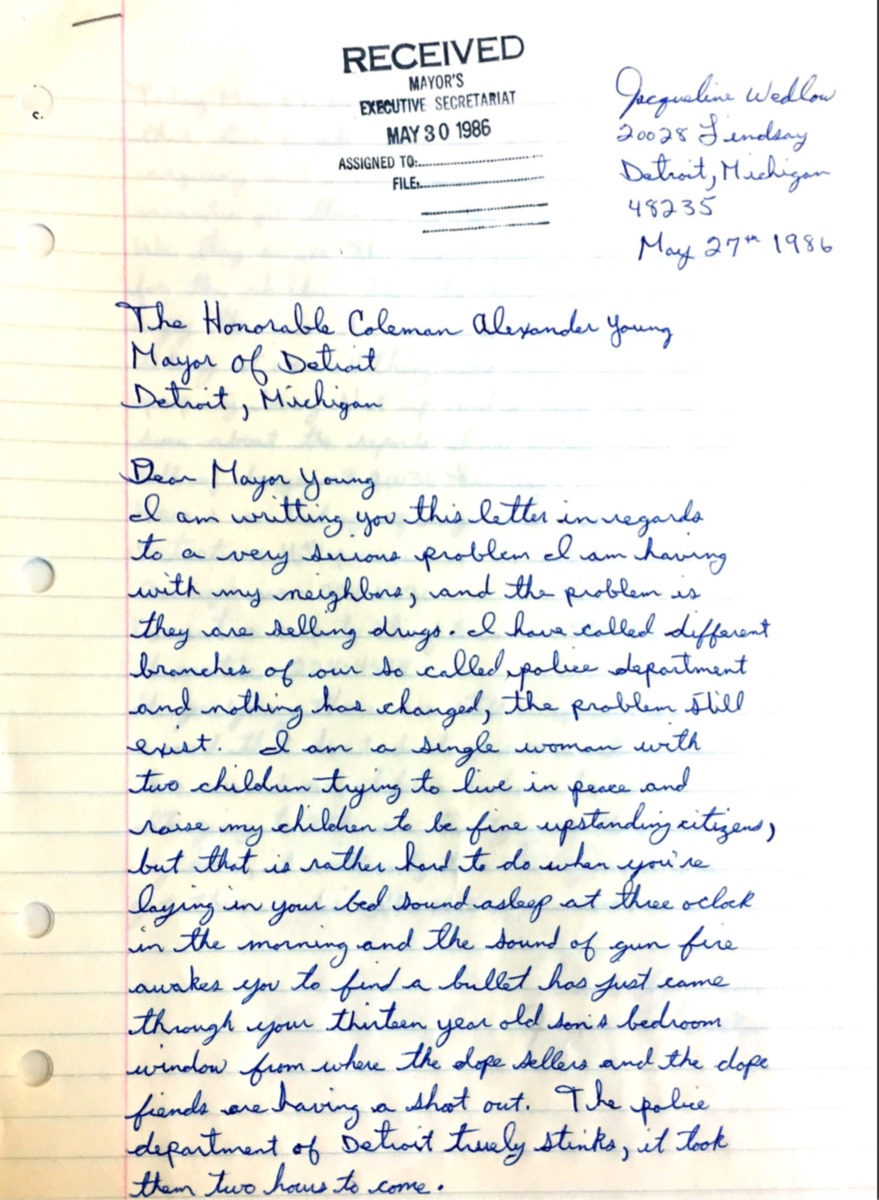 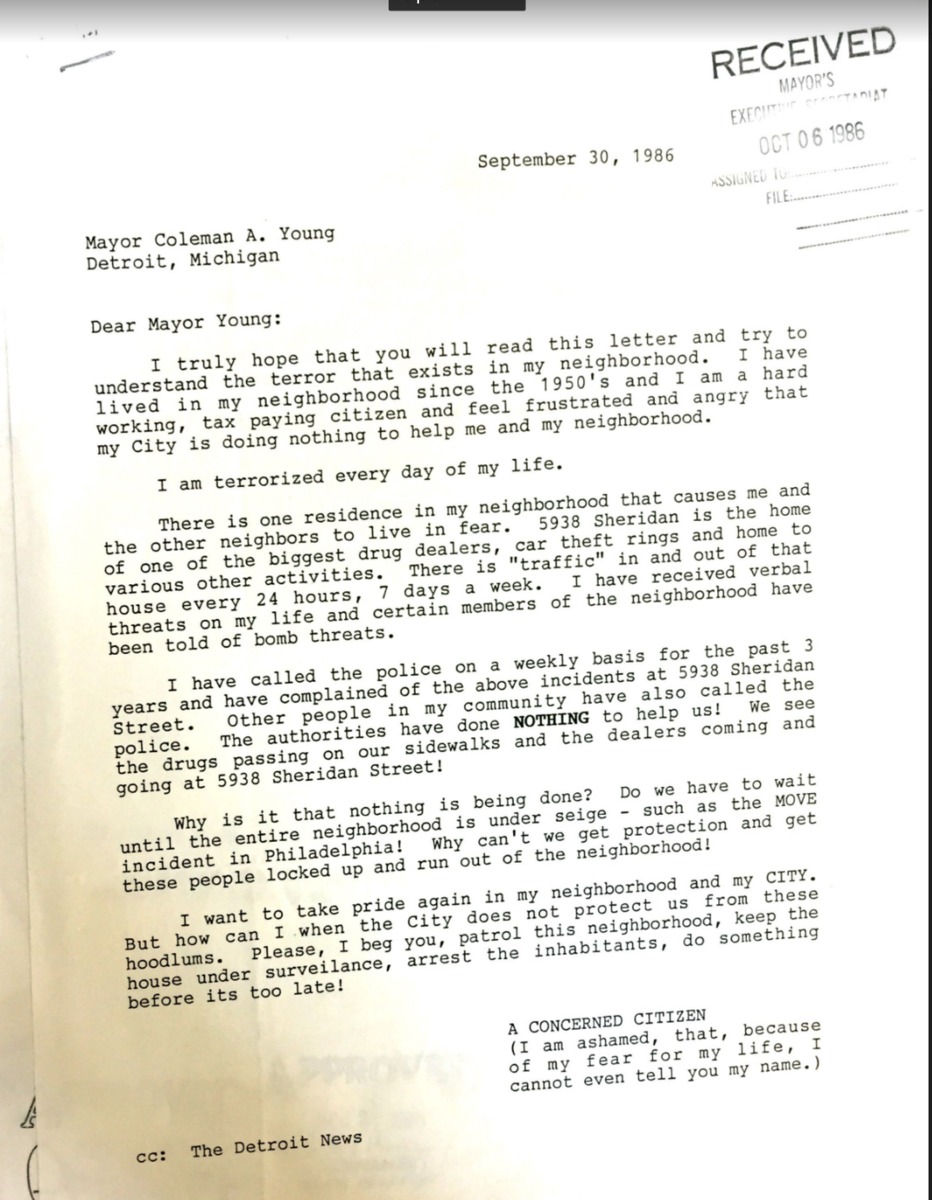 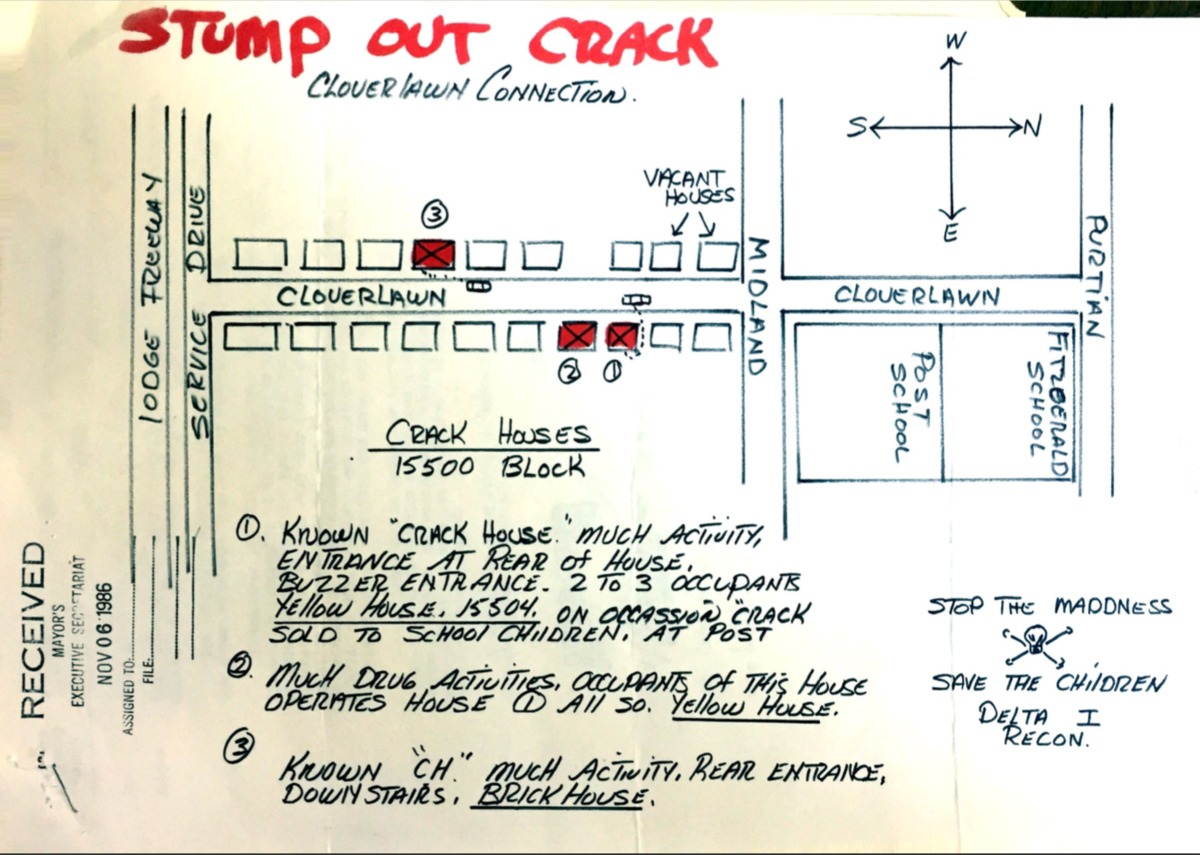 Save Our Sons and Daughters (SOSAD) was a grassroots group in Detroit started by Clementine Barfield after her two sons were shot in 1986; one of her sons was killed and the other suffered from physical and mental injuries for the remainder of his life. These tragedies occurred at the same time as Detroit was named the murder capital of the United States for the previous year, with increasing youth crime and the rise of crack cocaine being cited as the main culprits of the increasing violence. Consequently, Barfield began SOSAD as a group for mothers who had lost their children as a result of this escalation in youth violence. It grew into a much larger organization that advocated for the reduction of violence in inner-city Detroit, educated on anti-crime and anti-drug measures, and provided counseling and support programs. SOSAD further showed its support for the efforts of the DPD by including a song by The Blue Pigs in one of their newsletters. The Blue Pigs was a band made up of DPD officers that was founded in 1970 and performed at schools and events to spread the messages of crime prevention and the dangers of drug use.

An additional group that formed in Detroit in response to the community devastation witnessed as a result of the rising drug trafficking was REACH- Reach Everyone, Administer Care and Hope. REACH was started informally in 1981 by 12th Baptist Church members as an organization that would create affordable housing by refurbishing abandoned houses in areas that had deteriorated amidst drug violence. They expanded in the mid-1980s to include a food distribution program, narcotics anonymous groups, and recreational programs for low-income families. They became specifically involved more heavily in the anti-drug movement in 1988 when they formed a citizens committee that held anti-crack demonstrations and neighborhood cleaning events. 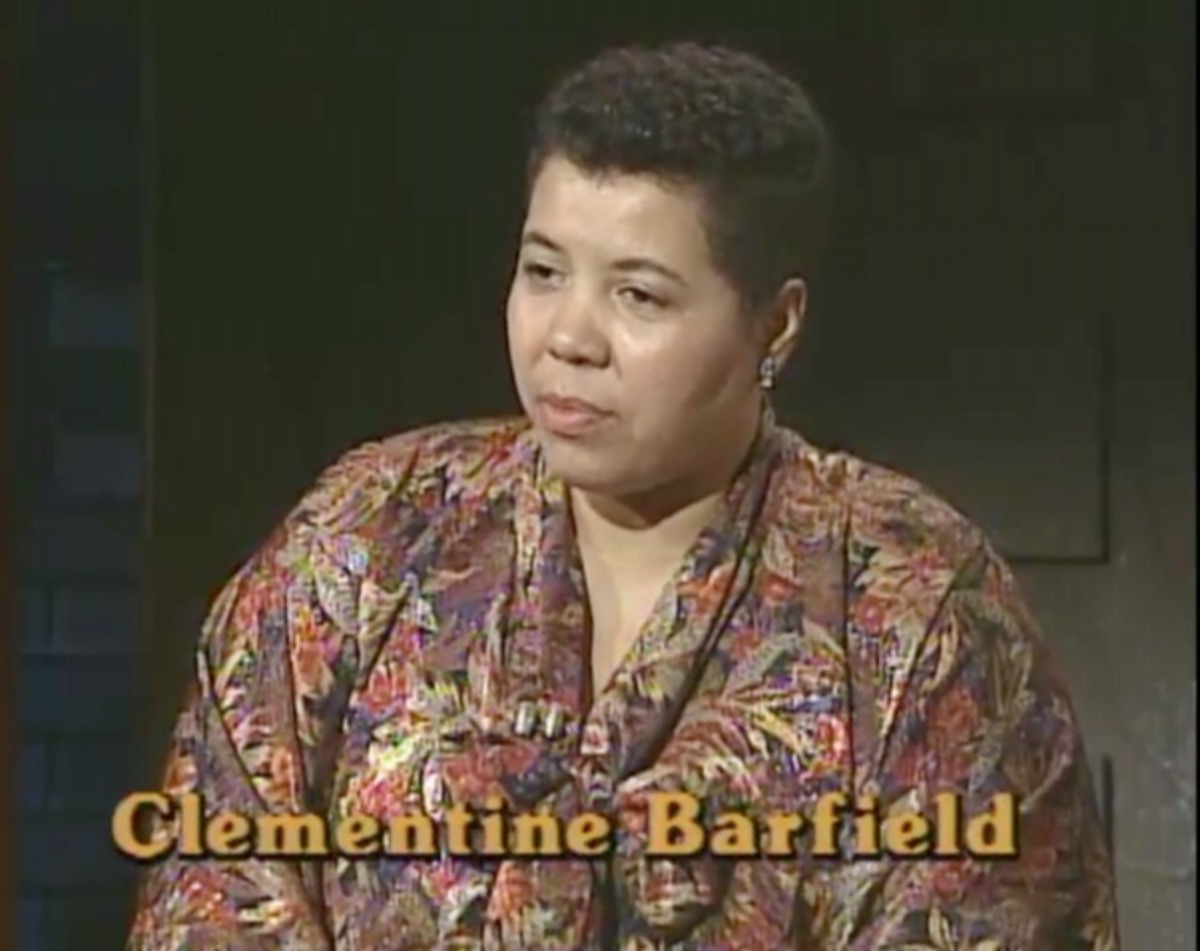 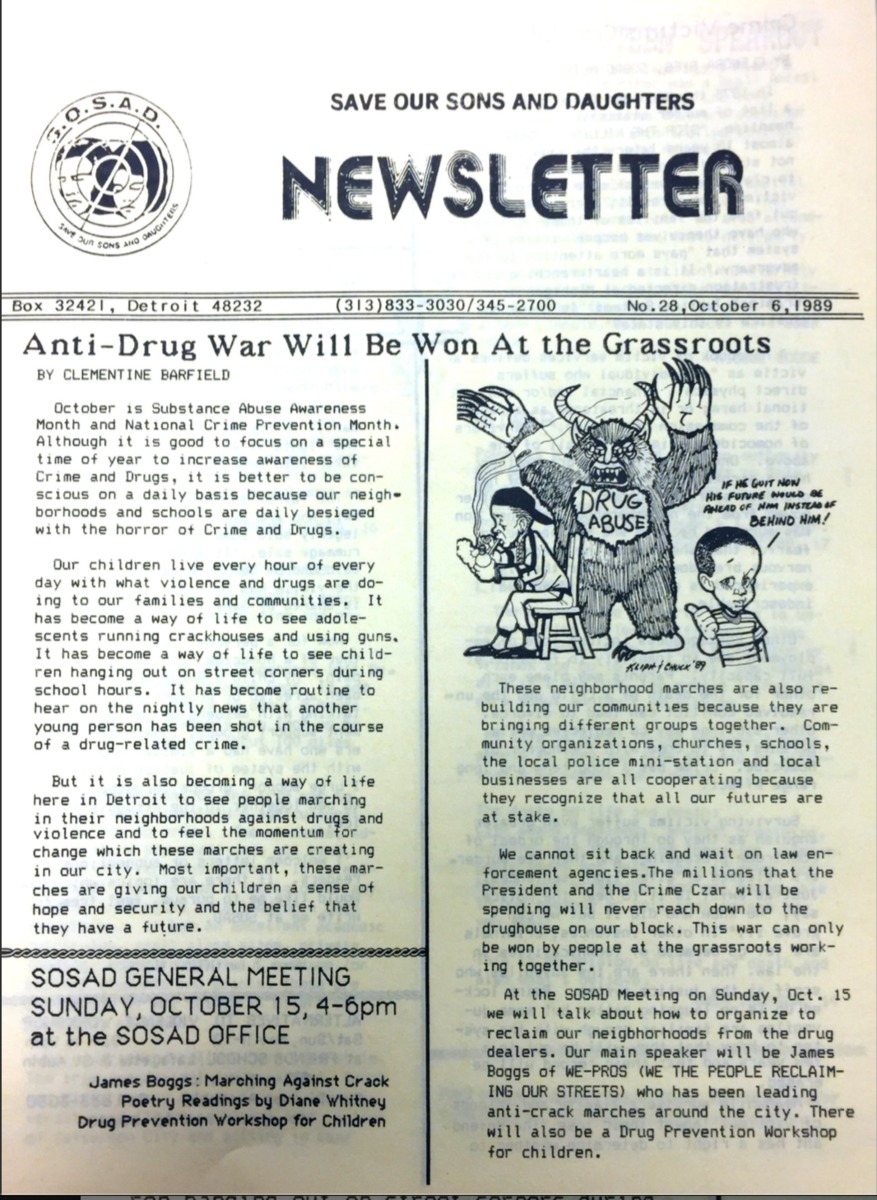 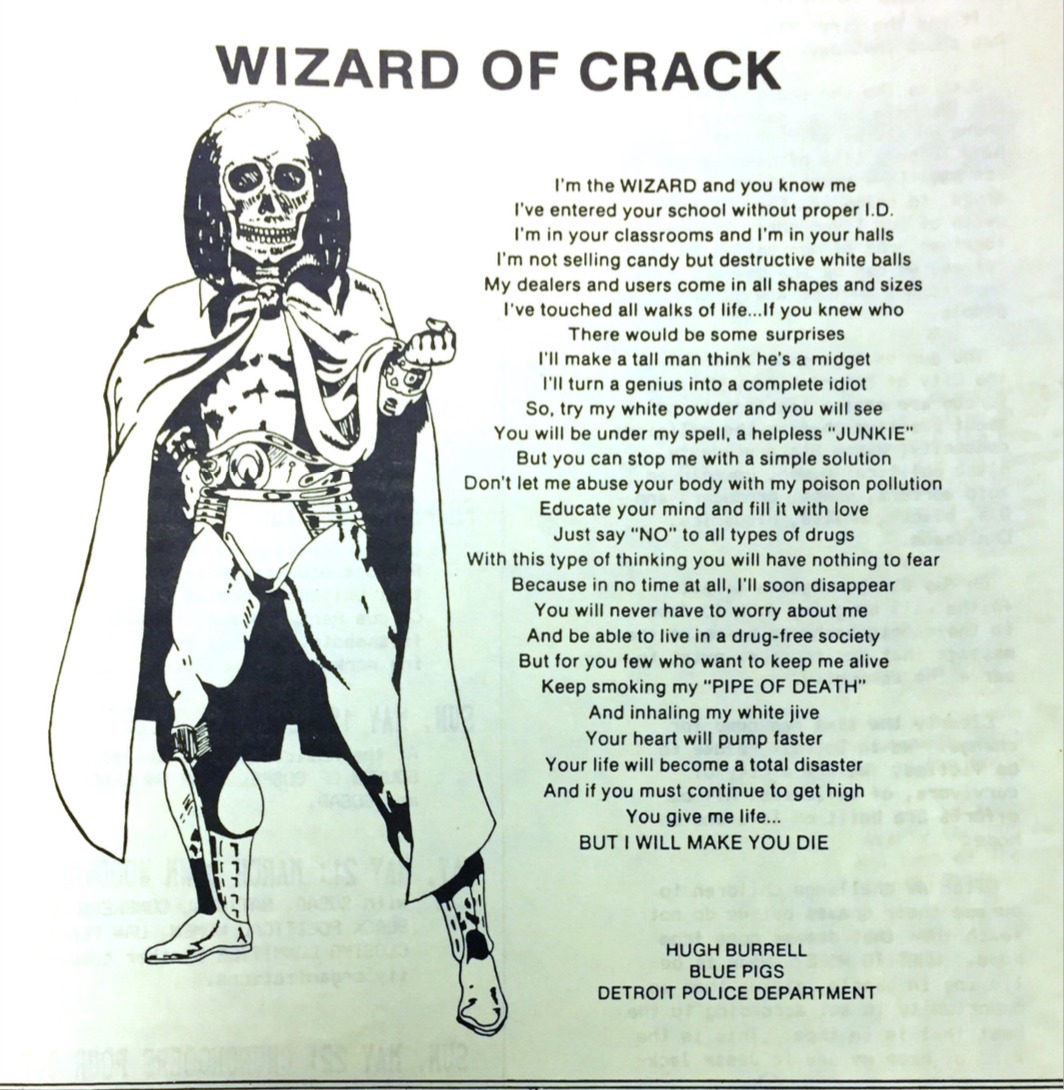 R. A. Lindblad. “A review of the concerned parent movement in the United States of America.” Retrieved from United Nations Office on Drugs and Crime, 1983.

Save Our Sons And Daughters Collection. Bentley Historical Archives, University of Michigan.