"There has been a breakdown in the criminal justice system in America... All too often repreat offenders, habitual law breakers, career criminals, call them what you will, are robbing, raping, and beating with impugnity and, as I said, quite literally getting away with murder." - President Ronald Reagan, 1984

1982 was the dawn of a new age for the United States. Ronald Reagan, elected President the year prior, promised a 'War on Drugs' and 'War on Crime' as a strong part of his policy platform. Detroit residents were no strangers to crackdowns on crime, but the city was struggling with more than just gangs and drugs at the beginnign of the 1980s. The city was experiencing the highest level of national unemployment, racial tensions, and a strong distrust of police and local government. Crime was the talk of the town in Detroit; as a reporter from the Detroit Free Press in the early 1980’s described it, “(Crime) was the overriding factor in national image, quality of life, it overrode everything. Whether it be murders, auto theft, youth gangs, narcotics traffickers or otherwise, it was clear that people saw Detroit as a place “where drugs and guns come raining out of the sky.” After Coleman Young’s initial crackdown on the early Detroit gangs, the public mood began to worsen as crime and drug trafficking appeared to increase throughout the city. Although crime rates, statstically, were on the decline, policing, particularly of juveniles, was increasing at a rapid rate.

Newspapers throughout 1982 headlined children's involvement with the drig trafficing rings in the city of Detroit. 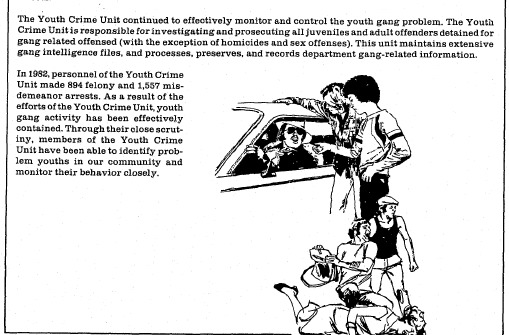 The Youth Crimes section of the DPD Annual Crime Report.

Young Boys Incorporated (YBI) and Gang Responses
A new and more organized drug trafficking gang called Young Boys Incorporated (YBI) started to develop in the west side of Detroit. They sold heroin in quantities unprecedented to the City of Detroit, making an estimated $500,000 in profit every day by the year 1981. The secret to their success was the streamlining of the drug trafficking process, some calling the group “the Henry Ford of drug dealing.” To protect their operation, the leaders employed youth under the age of 17 as “runners,” to avoid prosecution in adult courts. The media and citizenry speculated that the gang employed children as young as 8 and 9 years old to be runners, however this claim has been heavily disputed by historical scholars. The public began to perceive criminalization beginning at increasingly younger ages and the punishments for individuals under the age of 17 became increasingly severe. In 1980, Coleman Young introduced the Special Crimes section purposed to respond to violent crimes with more punitive and combative measures. Concomitant with the creation of the Special Crimes unit was the Youth Crimes section, a group entirely dedicated to combating youth crime of all kinds.

The Criminalization of Youth

The upsurge of gangs like the YBI was simultaneous with an increase in violence among juveniles. The media and citizenry of Detroit paniced over instances of youth being shot in the streets and in schools. The clamor for reform led the city government to enact security measures to combat “juvenile delinquency” and crime in all aspects of adolescent life. Interventions such as school sweeps, curfews and increased police presence became commonplace. The media and police began to draw connections between youth affected by crime and youth with gang affiliations, and in many cases, these connections did not exist. The government and police department’s view of “juvenile delinquency” as concomitant with crime became increasingly problematic for Detroit youth, particularly on nights like Devil's Night with increased police presence in every caveat of the city. At the same time, the Coleman Young administration and Governor Blanchard pushed to try more juveniles in adult courts. Despite the Young administration’s outward denunciation of punitive police tactics, their actions took a different form.

"We're gonna take names if we have to, and I hope that no butts are kicked... accidentally."  - Coleman A. Young

Corruption within the Detroit Police Department

As the policing of juveniles and drug trafficking within Detroit increased dramatically in the early 1980s, uncertainty regarding legal behavior of police officers also skyrocketed. Many officers were alleged to be cooperating with gangs and criminals in order to get a pay out across the city. In the case of the killing of Damion Lucas, there were many police officers in the Detroit Police Department that were alleged to be involved in protecting the real killers of the thirteen year old boy. Just as juveniles were being lured to criminal drug trafficking organizations with the promise of making large amounts of money, officers of the Detroit Police Department were also tempted to let crimes go for a certain price.