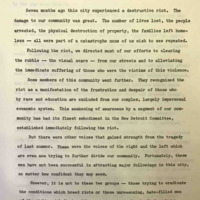 This page is still under development and will cover the Cavanagh administration's efforts to control rumors of black power attacks on white neighborhoods in metro Detroit in the months after the 1967 Uprising, and the hundreds of letters sent to the mayor by white residents of the city and suburbs demanding a crackdown on black "criminals" and radicals.