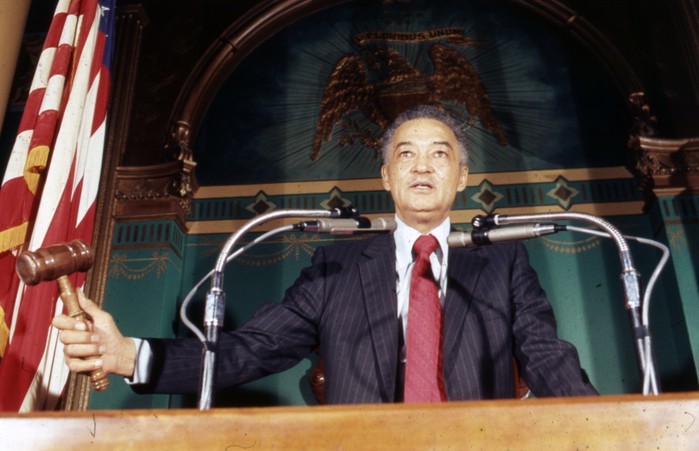 Then State Senator Coleman Young presiding over the chambers in Lansing in 1973, already amidst his mayoral campaign.

Black Detroit was eager for Coleman Young to show them he could be tough on crime while protecting law abiding black citizens from a historically racist police department that often had little regard for civil liberties and due process.  Some of white Detroit likely saw many of their black neighbors and peers as either part of or complicit in dangerous gang warfare and wanted to see them all locked up and crime to dissappear.  They agreed on the method but both of these ideas were naive and predicated on false assumptions. The DPD had been reformed to some degreee but the racism was still woven so deeply into the fabric of the department's enumerated policies and practices it could not be unstiched in a year. The DPOA remained a strong adversary to reforms promoting racial sensitivity. The notion that punitive policing  policies under Young would have significantly more equitable applications was stupid at best and as Detroit came to see horrificly wrong in reality. The belief that punitive policies—the consequences of their violently racist applications notwithstanding—would even be effective at meaningfully reducing crime was also rooted in misconception. The popular narrative at the time was that Detroit was one of the most violent cities in the country and the impetus of the crime was black youth and their widespread gang affiliation. This was simply empirically false. The source of most violent crime in the city was domestic violence—perpetrated largely by adult white men. All of this is not to say that there was not a genuine problem with school violence. However, the false narratives driving the discourse in the city around the issue did not provoke thoughtful solutions but rather engendered intense pressure on Mayor Young to make a powerful show of force.

It did not matter what he thought would be the most effective at reducing crime because success as a politician is far too often framed in terms of accomplishing what you campaign on not whether or not you make the lives of your constituents better.  Nuance isn't sexy. It wasn't when Young was running in 1973 and it wasn't when he was in office.