The Implementation of School Sweeps

The Early Stages of School Sweeps

School sweeps were implemented in the early 1980s in Detroit when the war on juvenile crime was growing. Although police and school forces were as strong as ever when it came to using force and deterring juvenile crime, however, juvenile crime was decreasing as a percentage of overall crime making this rise in force from the police unnessary for public school safety. Although it seemed that violence in schools was on  the rise, it was violence in the surrounding communities and neighborhoods of Detroit that infiltrated the school systems. The police activity defined by school sweeps was superficially intended to help keep schools safer, but resulted in increased profiling and discrimination against black youth throughout the early 1980s. This page explores police reports of school sweeps and the resulting effects on communities in Detroit. 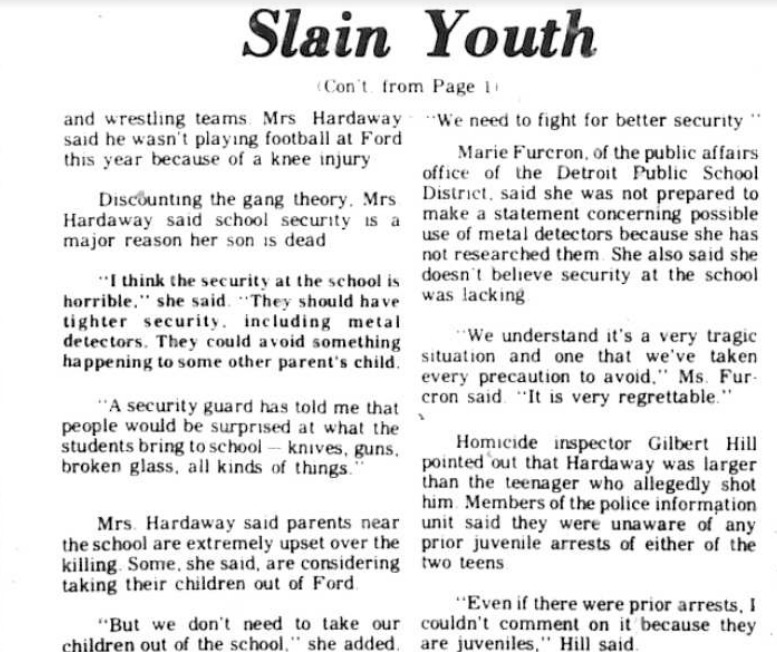 Michigan Chronicle article discussing the problem of violence within the schools 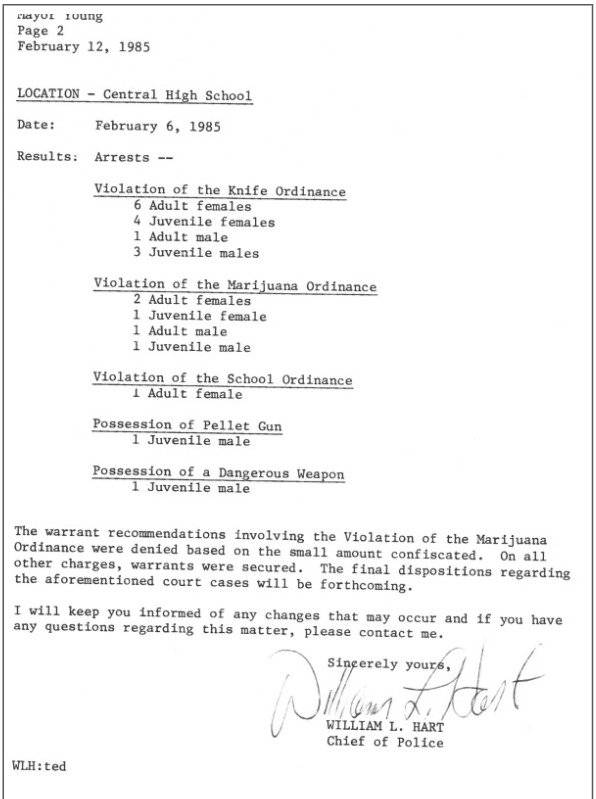 Central High School (in the Detroit area) records for items found during a school sweep. 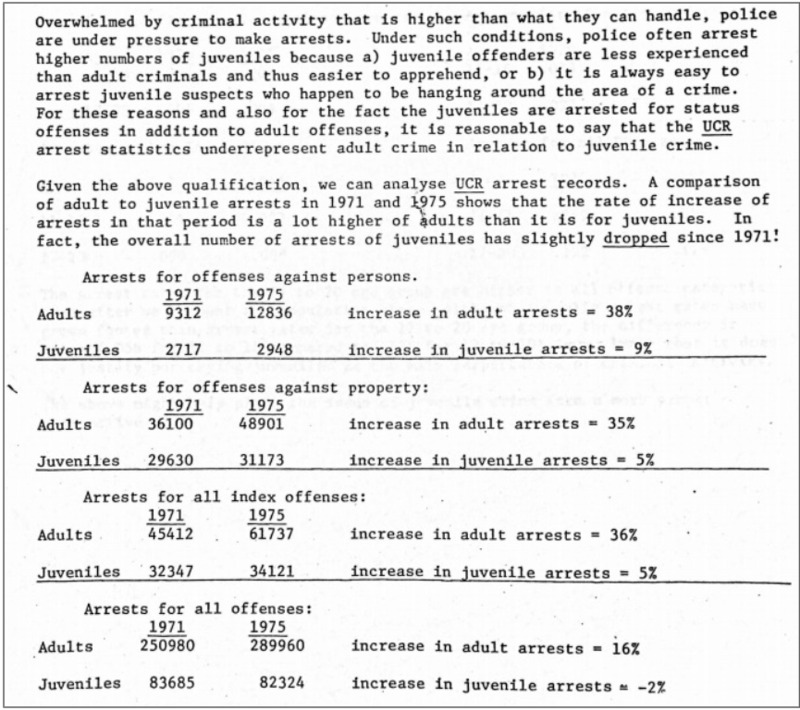 Comparison of criminal activity of youth and adults. Adults were found to have participated in more crime than the youth. 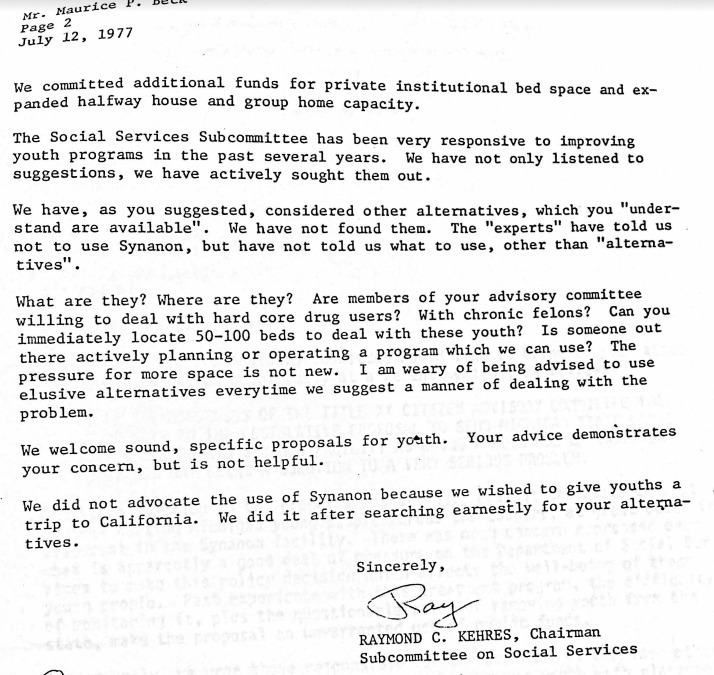 ACLU Activity with the DPD

The Michigan Chronicle reports of eleven school children being gunned down in a McDonalds restuarant near to their high school. The article reports that events like these were common and they were what led to the envasive school sweeps that palgued the school districts. The article also discusses the ACLU responses to the school sweeps. The ALCU was particularly active in Detorit during this time working to combat the racist policies implemented by the Detroit Police Department. The Union's lawsuit asserted that these practives of school sweeps were unconstutional.

The Michigan Chronicle reports on the public opinion of school sweeps. The mother of a killed child due to school violence talks about the problems related to the school sweeps, and blames the lack of school security policies, not gangs or weapons that resulted in her childs death. The majority of the response surrounding the killing of juveniles in school was a criticism of the lack of security in schools and parents also mentioned to the chronicle that they were considering taking their children out of the school, but none mentioned wanting to increase the number of school sweeps or police presence at the schools their children attended.

On Detroit's west side, a fight broke out in a high school where he was fatally shot by a classmate inside his school by a classmate. The police reported that Hardaway had a gang affiliation, but the Chronicle quotes his mother saying that he was not involved with any gangs and that he was attempting to break up the fight when he was shot. A classmate was also quoted by the paper saying "I don't know why they keep bringing that up...he wasn't in a gang -you can ask anybody Marco wasn't like that." Even as schools were facing increased violence from gangs in the surrounding city of Detroit, black youth were continually profiled by both the police and the press as a single group of 'gangs and drugs' which led to the escellation of conflict in the city. 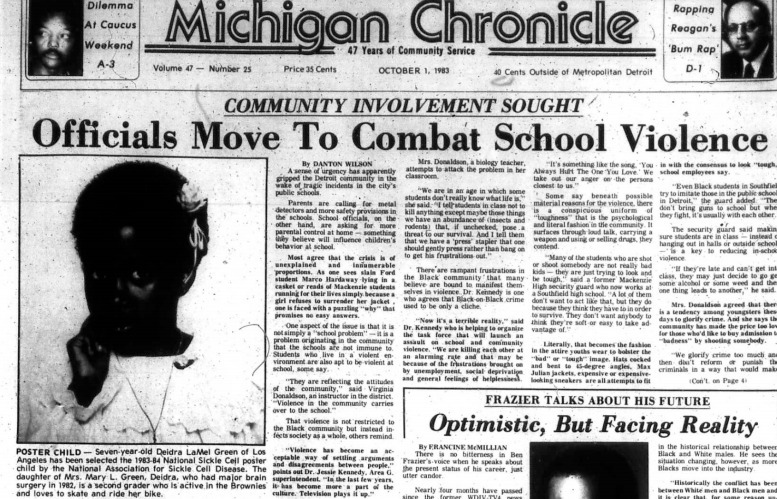 Chronicle Speaks Out about School Violence

The Michigan Chronicle was vocal during this time about school violence, particularly within black school districts. The story illustrates the issue of school violence as "not simply a school problem" as it is a underlying problem originating in the community that the schools are simply not immune to. The teachers reported teaching students not only school subjects, but also life skills. One biology teacher mentioned that she focused on violence and emphaized that she frequently had to remind students not to abuse classroom materials.

During this time, police began to make an increasing number of youth arrests. Although crime rates were increasing, adult crime was increasing significantly more than juvenile crime, but the police focused on juveniles and how to punish them.  The arrest records detail that juvenile offenders were generally easier to arrest because they are less experienced than adults. The arrest record also mentioned it is easy to arrest juveniles based on their proximity to the crime scene. This is significant evidence to that police were overpolicing juveniles, particularly black juveniles, because they are a vulnerable population. Looking back to the case of Marco Hardaway, it is important to recognize that proximity was a large  part of why arrests increased so significantly during this time. Hardaway was simply at the wrong place at the wrong time, and was implicated in a case he would have otherwise been uninvolved with, but based on his proximity he was killed. These ideas from police officers about proximity and accusations contributed significantly to the number of juvenile arrests and violence toward juveniles.

Govenor Millikan's correspondence about monitoring and the importance of understanding all components of the criminal corrections system for juveniles. In addition to overall monitoring of the system, but also in decreasing recidivism, developing community based alternatives, and legislation for juvenile justice. 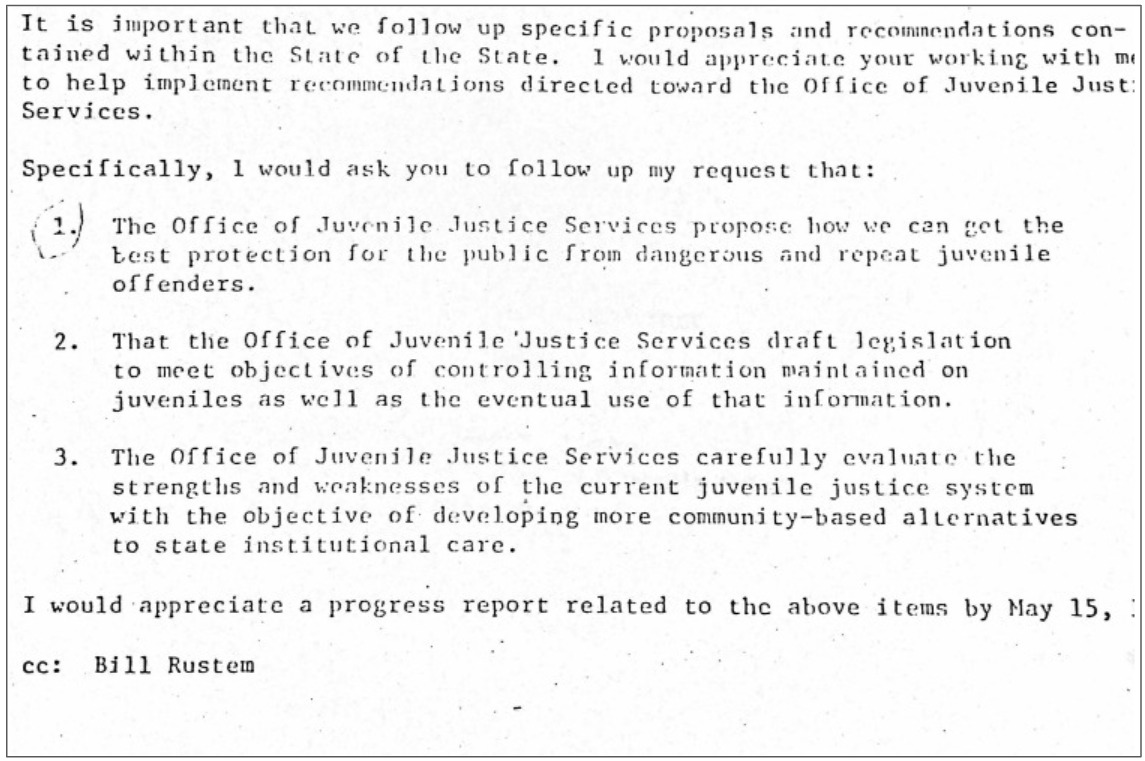 The Detroit Police Department often conducted these school sweeps on reports of increased weapon use and posession in schools. The reports from the school sweep operations and the images show the inconsistencies between the reports and the reality. As seen here, the majority of the weapons found were simple kitchen knives and only one gun was found in the operation. This image also shows a collection of several schools' sweeps which reflects that violence in schools was a significant problem, but it was not youth or black youth that were propetuating this problem. 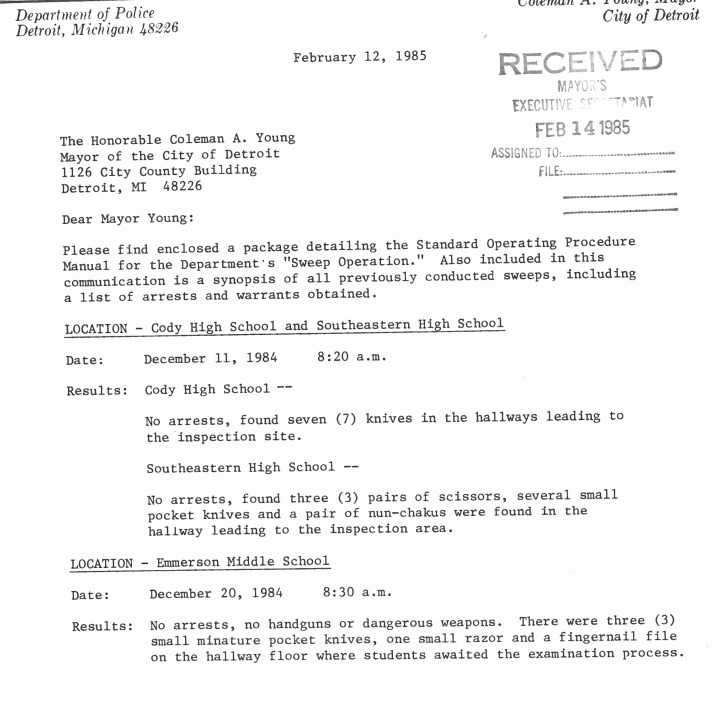 Results of the Sweeps

Reports of the multitude of school sweeps and checks often resulted in minimal findings. As reported to Mayor Young, no arrests were made in these three sweep operations in the city's high schools. While the sweeps were implemented to look for weapons like guns and drugs, the reports detail the finding of isolated objects like knives and scissors. The letter also reports that a fingernail file was recovered in the sweep. These findings support that these sweeps were rooted in racial discrimination against black students and schools as the rationale for these agressive searches was met with minimal evidence to suggest the operation was sucessful at keeping schools safer. These school sweeps continued to flue the fire of racism already burning in the city. 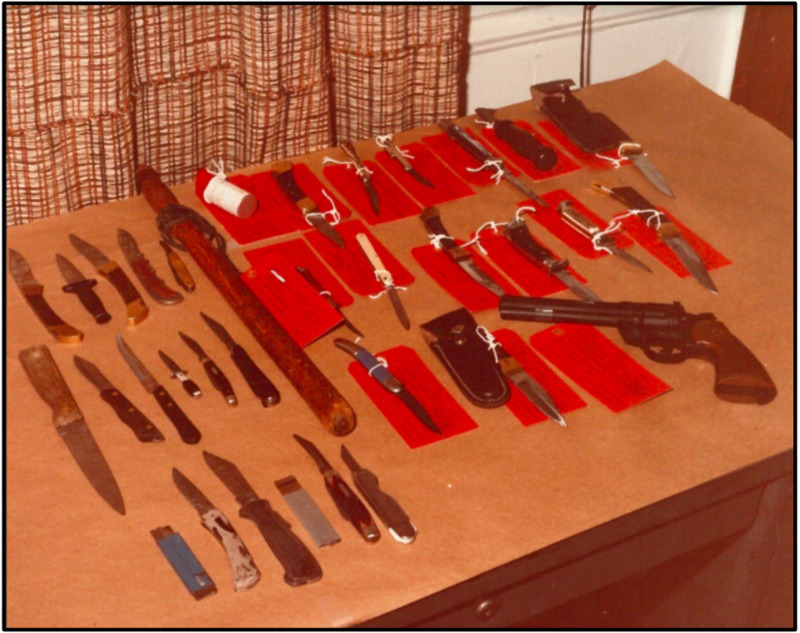 Items found during a school sweep in a Detroit area school.