A collection of newspaper headlines from the early 1980s showing the prevalance of youth shootings and gun violence around the city of Detroit.

The years preceding 1985 saw an unprecedented spike in youth shootings. The reality of that spike was real or perceived is unknown, but it is clear that youth once again dominated the conversation surrounding crime in Detroit. It is during this period that African-American youth affected by crime,  gang members and drug dealers become conflated in the eyes of the police department; thus, when the police department was charged with combating juvenile crime, they did so with methods that were reminiscent of the gang squads in the 1970's.

Concerned citizens across the city of Detroit took to writing letters to the Mayor about the youth violence problem. Many wrote in support of a ban on handguns in the city and Councilwoman Mahaffey's proposed legislation on a firearm ordinance. One concerned citizen wrote that Mahaffey's plan was not ideal, but that "in a situation where this is nothing, this is something" and encouraged the Mayor to implement any restrictions to reduce the level of crime in the city. Many other citizens also wrote about family and friends being shot and killed. One listed the names of children who had been fatally shot with the youngest being only eight years old. These letters became more hostile toward the Mayors perceived inaction about the crime rates as one Detroit resident wrote at the bottom of a list of more than 20 names; "we think that's enough, don't you?" 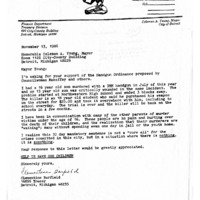 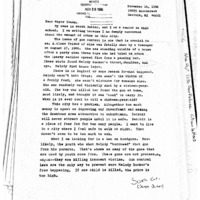 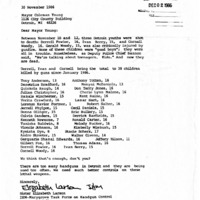 Letter from the IHM-Marygrove Task Force on Handgun Control with total juvenile deaths. 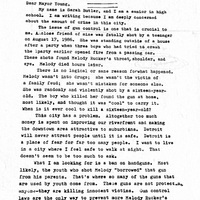 African-American Youth as Gang Members: Branding
The legacy of Young Boys, Incorporated (YBI) tainted the image of juveniles for the remainder of the decade. Images of 12 year-old drug runners invaded the public psyche, and the leadership of the Detroit Police Department were not immune to the perceived threat that youth with acccess to weapons could become the next Young Boys, Incorporated. Inspector Joel Gilliam, the Commanding Officer of the DPD Narcotics Section, testified in Congress in 1986 about what he perceived as the “role model” status that Young Boys, Incorporated held for African-American youth. “YBI became the status symbol of success for black teenage males on the streets of the City of Detroit.” “Ask an inner city black youth what he wants to be in the future, and don't be surprised if he says, ‘a major drug dealer.’” Gilliam stated that the prevalence of youth-on-youth violence was a direct consequence of crack cocaine and the drug trade. The case of Marco Hardaway is representative of the media and police department’s alacrity to brand youth-on-youth violence as indistinguishable from gang violence. 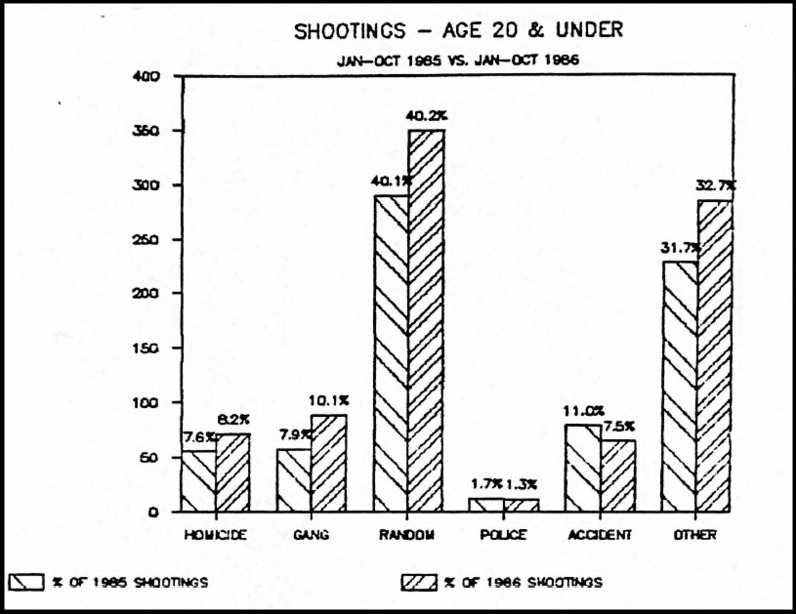 Statistics on shootings that involved juveniles, provided by the Special Crimes Section.

How Real Was the Increase in Juvenile Violence?

It is difficult to discern to what extent juvenile violence in schools was truly intertwined with drug trafficking gangs, and how much of the trend was merely perceived. Of the citizen letters we were able to find regarding the deaths of youth at the hands of other youth, none of them mentioned drugs or gangs as a factor. In fact, some explicitly stated drugs and gangs as nonfactors. During an interview with a contemporary Detroit Free Press reporter, he stated that

“There was the notion of these young super-predators, and a notion that these lone wolf, or these “packs,” they wouldn’t even characterize them as gangs in a lot of ways, that they’re more or less free-forming packs.”  “A white suburbanite going downtown didn’t fear YBI, but they would worry about packs of kids getting together, and start playing hooligan or being the fool until someone does something serious.”

However, by the Detroit Police Department's own estimates, only 10% of all shootings involving youth were gang-related in 1986. Although this was a 3-point increase from 1985, the number is hardly significant enough to justify a return to 1970's level gang squads. It is also during this time that no youth gang separated itself above the rest to capture the attention of law enforcement. Drug trafficking operations were relatively low-profit at this time and were dwarfed by the operations of Young Boys, Incorporated and the youth gangs of the 1970's. As a Free Press Reporter stated, "these kids would call themselves a gang, but it was (really) just the neighborhood kids."

The War on "Youth Gangs"
In the same year as Joel Gilliam’s testimony and the movement to ban handguns, Chief of Police William Hart sent Mayor Young a “Youth Shooting Curtailment Plan,” advocating for a revitalization of the Youth Crime Unit, colloquially known as the “Gang Squad.” Like Gilliam, Chief Hart believed the youth shootings to be a result of “loosely knit youth groups who are involved in street crimes for profit and to a greater extent narcotic activity.” Although Chief Hart recognized that these groups of youth were not organized or profitable to the extent of YBI, he nonetheless requests that funding for the Gang Squad return to its mid-1970’s levels when gang violence was at its peak.  This request for a revampled effort against gangs was contrary to public statements being made at the time, especially by Coleman Young. Mayor Young repeatedly insisted that Detroit did not have a gang problem. In 1988 the mayor claimed:

"If you look at the papers, you'll now see that Los Angeles is beset with a horrendous gang problem. That's a problem that we faced and met in Detroit back in '77. We formed our gang squads then and we went to war with the gangs then. " 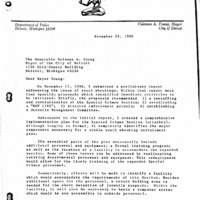 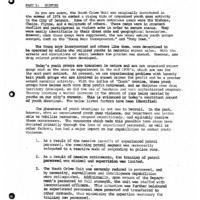 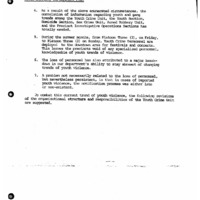