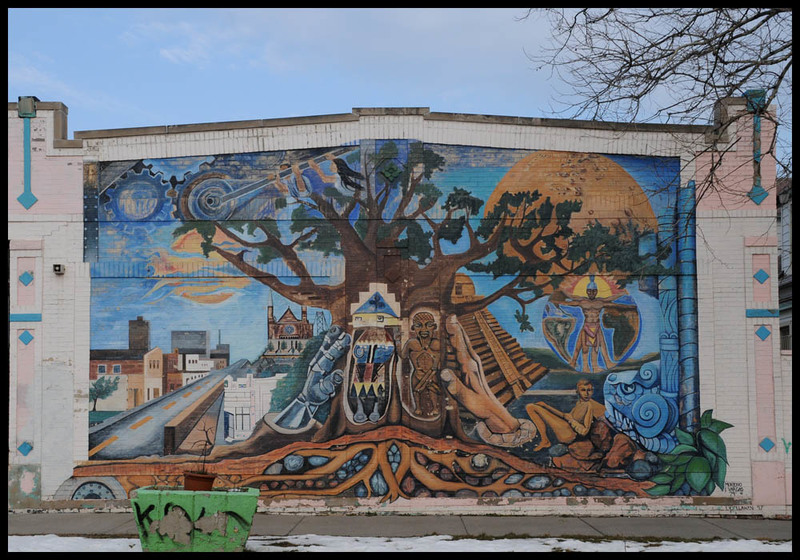 Historically the portrayal of Detroit has always been seen as a Black and white city. However, Since the early 1970’s there has been communities in which not only a majority of residents are Hispanic, but Muslim and Asian. You could find the Hispanic community in Southwest, Detroit. Where a majority are Mexican-American residents. Even in the 1990’s Southwest was a community filled with residents from Latin America, still predominantly Mexican-American. Many of the residents immigrated here from countries like Mexico, Guatemala, Puerto Rico, etc. Which meant they faced many barriers when settling down here. The city did provided resources to their residents ,however, the resources being offered were not adjusted to fit the Southwest residents needs. Which we then start to see an increase in community organizations that help bring awareness to these problems. One of the first community organizations that appear in the 1990s is Latin Americans for Social and Economic Development( La S.E.D). La S.E.D’s main mission was “ created to advocate for the social and economical development of Hispanic and residents of Southwest Detroit. La S.E.D Board of Directors felt that hispanics were not availing themselves and/or not having accessibility to social, public and private programs they were entitled to as citizens of this country and because cultural linguistic differences.” During Coleman Young’s time in office this type of civic engagement started to bring change slowly due to the organizations bringing attention to these social problems. Southwest, Detroit, currently in 2019 still has the highest Latinx population in all Michigan and as you can tell it is located on the Southwest side of Detroit, blocks away from the Ambassador Bridge connecting Canada and the United States. 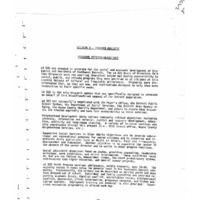 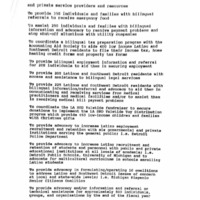 Rising gang violence with the lack of Policing

In the early 1990’s the increase in gang reports, drug trafficking, violence had erupted in the Southwest, Detroit Community. Gangs had already existed in this area since the 1950s, yet they had began to have more influence over the community. The gangs who specifically were located in Southwest Detroit were brought in by Chicago residents. One such violent gang called Latin Kings were very prominent in this area that in the early year of 1993 Detroit press reported 43 indictments of Latin count members. A reason as to why these types of gangs grew prominent in Detroit where the lack of resources given to Hispanics residents and the lack of policing happening in this area. Being that Detroit residents had always been predominantly black and white the city did not take into account the needs of Hispanic residents. Policies and resources such as the police were not adjusted for the racial demographics that Southwest Detroit possessed. Which because of this grew the demand for community organizations to represent the needs of citizens. While the community fought for their economical needs they also faced these violence from gang members.At the time Community organization like La S.E.D only focused on the development of Southwest, Detroit and not until a community organization called Anti-Gang and Violence Council managed The Holy Redeemer Church, a neighboring church, did the community start taking action on these issues. 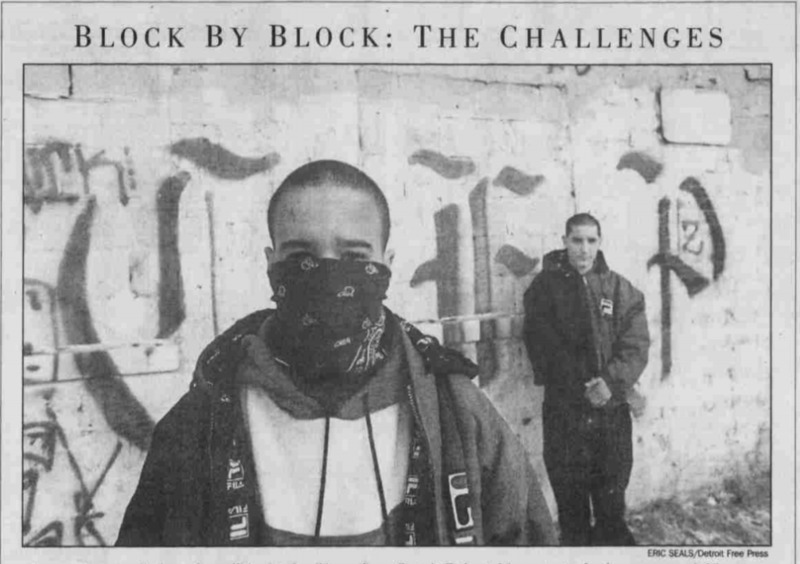 Gang members infront of a tagged wall in Southwest Detroit. (1993)

On March 21, 1991, a group of Southwest, Detroit residents took political action for the lack of policing and the increase of gang violence occurring in the area. Residents attended a board of police commission meeting and addressed their concerns that consisted of accounts with gang members, discriminatory incidents done by police, etc. One of those in attendance was Angie Reyes a board member of Anti-Gang and Violence Council.

"Robert Laberta, resident of the fourth Precinct, described his home being shot up by AK 47 762 Russian automatic rifles. He displayed his clothes with bullet hole damage. Mr. Laberta advised. The parents of all the children to control their children”
“Carl Day, President of Southwest Detroit Improvement Association. Stated that the association Board of Director took a vote and wanted to express their opposition to police layoffs.”
“Jimmy Correo, local youth, complained that the police harass the youth and all Latinos like they are gan member. “I’m Puerto Rican but that dies bit mean I am a gang member. The police have to learn to communicate with us and learn who the bad guys really are. The police should show us some respect” he stated”
“Sandra Serna, residents of Southwest Detroit, recited a long list of crimes fin the neighborhood and complained that there were not enough police in the area”

After this event you could start seeing a bit more support for Southwest residents for example chairperson Williams attending a conference on gang group sponsored by La S.E.D.

A year later, on January 9, 1992 the community took it upon themselves to address the increase in gang violence and the lack of policing that was taking place in SW. Nothing had really changed. The concerns where still the same as last years, which goes to show that the city wasn’t invested in the problems occurring in Southwest Detroit. This time in attendance was the Chief of Police Stanley Knox.

“Maria Finn , Southwest Detroit, works near the ambassador Bridge complained that she saw six(6) officers neat the Fog theater but no officer near the scene of hold up killing at Woodward and Grand River. She stated that the increasing crime and anger give Detroit a poor image and no one is ding anything about but talking about the problem”
“Blanca Evalusos, has lived in the Southwest area for thirty (30) years, stated she has been threatened that she would be shot by the Cobra gang. Ms. Evalusos said she cannot sleep due to her fear. 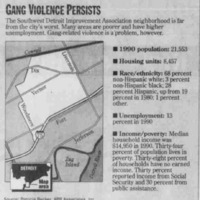 On March 11, 1993, two years since the first meeting with Southwest residents and the Board of Police Commission, residents of SW were in the same circumstances. This time commenting on the misconduct of police officers and the resources being taken away from the fourth precinct.

“Peter Meed, Teacher at Southwestern High School, stated that the citizens were frustrated. Translated Luise Ortega’s presentation. We need more officers that speak Spanish.”
“Jack Malohey, residents of the 4th precinct stated that we have all witnessed the decline of the city of Detroit. We need the return of Commander Gomez to the 4th Precinct”
“Carol Romero - complained that Insp. Napoleon and the gang squad were a joke- they arrested me twice and took my daughter away from me. I was going to sue the department”
“Unknown Man (refused to identify himself) stated he was an officer for the Michigan Department of Correction and related an incident where he was stopped by the Detroit Police because he was a Latino and they called him a “spic””

One thing is for sure, that throughout the years what has stayed the same is the demand that residents had on the city to recruit more Spanish speaking or Latino officers.

Minutes of the Board of Police Commission(BPC) 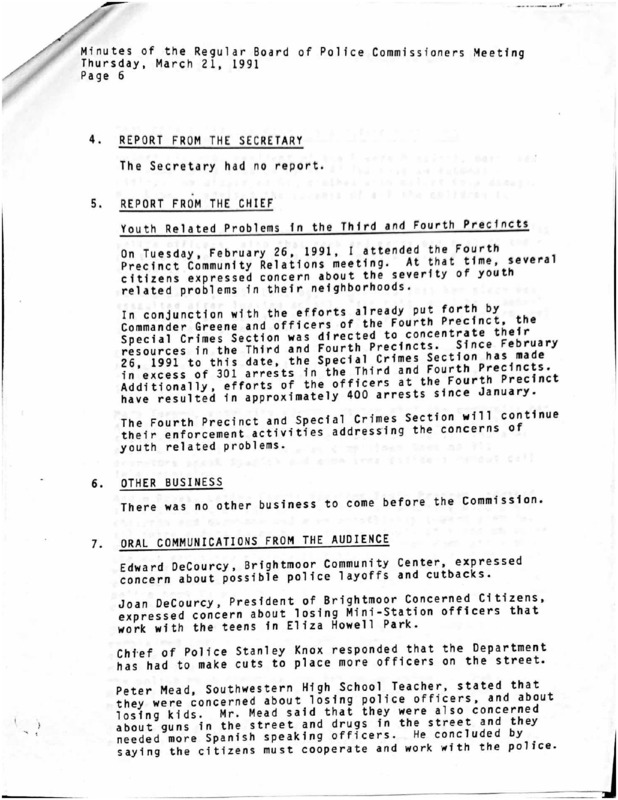 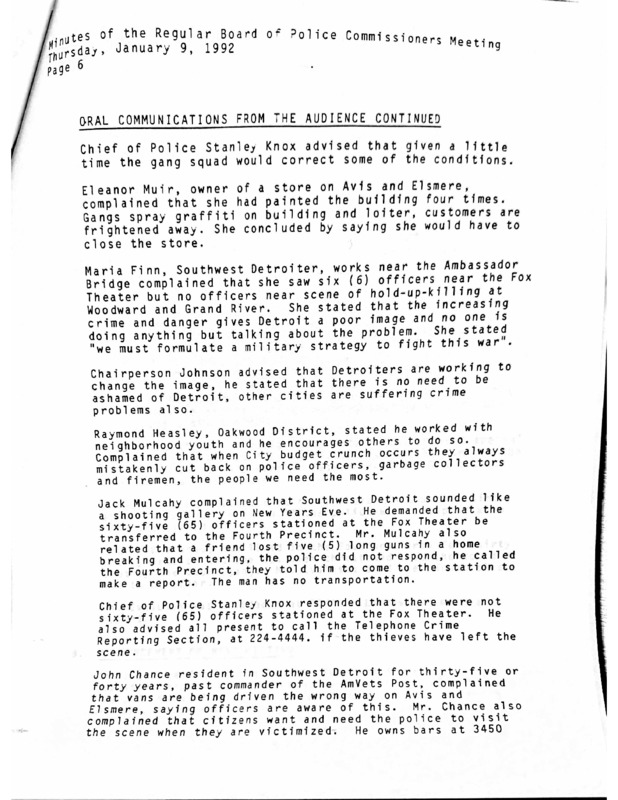 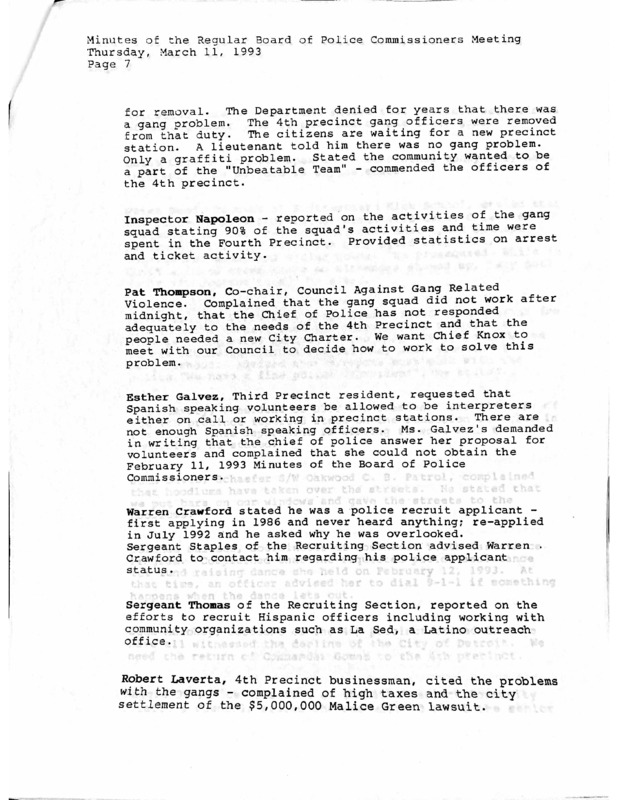 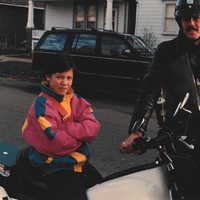 With the start of Anti-Gang and Violence Council and the city getting more involved with the gang problems in Southwest, Detroit. On paper it started to look good for the town. However, from the documents we were able to gather it seemed that nothing really changed for the residents of Southwest. Over the years they were given more resources such as a gang squad.Yet, this created more problems for residents who were racially being stopped for looking like a gang member. The community fought for more representation on the force and throughout 1990 to 1993 this was their most important demand.  Community organizations really pushed this idea, not just to the city, but to residents. La S.E.D on its own pushed this by offering officer applications in Spanish to community residents. From 1991 to 1993 the Detroit Police Department(DPD hired 10 Hispanic male officers,2 Hispanic female officers, and at the end of 1993 had in total 65 Hispanic officers on the DPD force. We aren’t sure if this was due to community activism or actual police engagement with the community, but we can say that the community had a huge part in increasing these numbers. 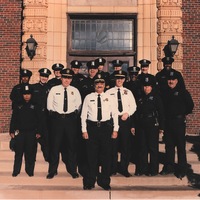 Even though the number of hispanic officers increased, the community had a hard time retaining these officers, as they were constantly being moved from precinct to precinct. An instance like this was brought up by Thomas Christens, member of Southwest Detroit Improvement Association, in a Board of Police Commission meeting, where Commander Gomez from precinct four was being sent to the downtown department. This isn’t the only instance of the cities negligence in sending instrumental officers from precinct four to other areas. 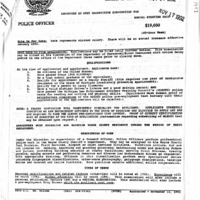 Officer application written in Spanish and English for Sw residents

In 1993 gang violence was at an all time high and still police assistance was yet to be seen. Instead of relying much on the city community members took action by providing different alternatives to youth,  raising awareness in schools, talking to local business, etc.

Coalitions were made to create job opportunities, recreational sports, groups were made to talk to stores in the area and pressure them to eliminate the sell of liquor and tobacco to minors. Organizations like the Anti-Gang and Violence Council started recruiting old gang members to tell their story and expose the truth of what it really is like being a gang member. However, on September 16, 1993, a Board of Police Commission took place in which a Southwest resident from the Latino agenda and Coalition, spoke on the recruitment of Hispanic officers. 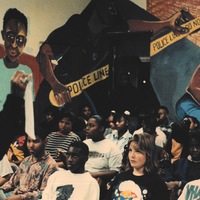 DPD officers with kids at Patton park Rec in SW

Yet, why are these numbers not being represented in the Detroit Police Department Annul Report. This occasion happened near the end of 1993. With this we can infer that throughout the years of 1990 to 1993 not enough was done to fix the gang violence happening in Southwest Detroit. We are not positive when we say that the gang violence stopped in the following or the year before that, but we are certain that the violence did not stop in 1993. In our study we were able to meet and interview Isaish Melkconss,former……Detroit…… In his interviews he explains to us certain event that occurred in 1995. This instance helps u s infer that the violence Southwest was known for in the early year was still prominent.(His interviews is included below). 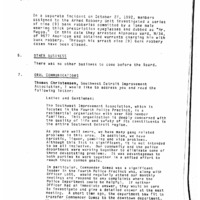 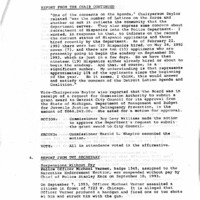 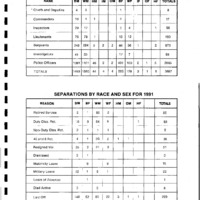 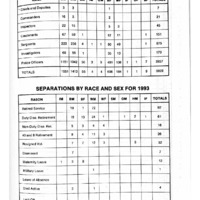