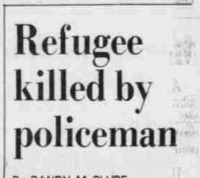 Felix Martiato, a 26 year-old man and Cuban refugee who left during the Mariel boatleft, was shot by Officer James Mitchell on May 8, 1982 in Detroit bowling alley. Officer Mitchell arrested two of Martiato's friends upon entry, and continued on into the basement where Martiato was. Allegedly, a struggle ensued between the two after Martiato grabbed the Mitchell's arm which resulted in Mitchell fatally shooting Martiato. Neither Martiato nor his friends at the bowling spoke English, and all were charged with unknown offenses. (See, section on violence against latinx)

Benjamin Wright, a 39 year-old man, was shot several times by Officer John Glide after police said that Wright refused to drop a weapon he was aiming at the officers, who were arrived in an unmarked police car in plain clothes to investigate reports of an armed man in a vehicle. Wright's neighbor, who was about eight feet from the officers at the time of the incident, said that Wright was not holding a gun; however, he saw that a gun was lying on the seat after Wright was shot.

Beauford Walton, a 30 year-old African American man was shot and killed by Officer John Bierkamp on Janurary 3, 1983. Walton was recently released from the Battle Creek Veteran's Hospital after being treated for a mental condition. He was at home with his grandmother when neighbors reported Walton to the police for holding a shotgun outside of his house, and neglected to mention that he was a mental patient. Officers showed up at the address and were begged by neighbors and Walton's grandmother not to shoot him, but at some point a shotgun blast from Walton grazed a couple of the officers. When Walton retreated into his garage, the officers fired shots through the garage door until he was killed.

Ples Edward Hardy, a 50 year-old African-American man was shot by Officer Reginald Barnes outside of his family-owned drug store. What galvanized the sequence of events that resulted in Hardy's is disputed. The officer alleged that he pursued Hardy's son to the drug store after he failed to ignore his traffic command, after which Karl Hardy, the older son of Ples Edward Hardy, emerged from the store, threw down his weapon, and engaged in combat with the officer. Then, Ples Edward Hardy came outside and shot Officer Barnes during the fight. Then, Barnes said he returned fire. However, customers present at the scene claimed that Hardy called the police to his store to deal with two youths who were creating a disturbance. They allege that when the officers arrived, they began to "mahandle" and harass Hardy's sons in place of the aforementioned youths. Hardy then came out to defend his sons and fired a shot, resulting in him being shot and killed by Officer Barnes.

Daniel A. Clark, an African-American man was shot by Officer John Bierkamp and Officer Kenneth Tye on September 28, 1983.  Clark was being evicted from Booby Trap Lounge on 8 Mile Road by the officers when Clark pulled a weapon on the officers, as per the police report. Clark received several shots to the torso and arm and was hospitalized.

Kenneth Denson, a 24 year-old African-American man was shot and killed by several Southfield and Dearborn Heights police officers on November 3, 1983. Two plainclothes officers reportedly observed Denson kick down the door of a home and rob $440 worth of goods. They then requested support which culminated in a pursuit of Denson. Once Denson pulled over, officers thought they observed him reach under the seat for the purpose of grabbing a firearm, and proceeded to fire multiple shots into the vehicle, killing Denson. No firearm was found on the scene.

Vincent and Ricky Richardson, ages 22 and 24, respectively, were shot and killed by Dan Browne, a retied police officer and the owner of the bar in which the shooting occurred. Vincent and Ricky announced a hold-up and verbally urged Browne not to go for his weapon. Browne ultimately pulled his shotgun and killed both of them, only suffering minor wounds.

Ronald Darnell Williams, 31, was shot and killed by police officer Brenda Pittman. Pittman was accompanied by her lover Otis Reynolds, a former DPD officer who had been laid off several months earlier. Williams and Pittman had been in a relationship and had lived together for many years, but Pittman began a relationship with Reynolds shortly before the shooting. A cassette tape of the incident quotes Pittman as saying "I'll shoot!" at least three times, to which Williams responded "Then you'll have to shoot me in the back." The officers charged that Williams had overpowered them in a fight. Pittman and Reynolds were charged with manslaughter but were acquitted in the Recorder's Court in 1984. However, Pittman was later fired by the DPD in 1986 because of the incident.

Charles Hollingshed, a 36 year-old African-American man, was shot and killed at 10:45 p.m. on February 19th, 1984 by officers Willie Hence, Ted Wasik, and Earl Cunningham. Hollingshed was wanted for violating parole and drug charges, but his family believed that the confrontation was the culmination of weeks of harassment by the police. Eugene McMillan, who lived in the same house as Charles and his brothers said that the police resented him because the house was believed to be a drug pad, which she said was untrue. Charles was picked up by the police while sitting on his porch and dropped off again. His brother Jeffrey, 29, said the police told him they were "going to get him." Police Lieutenant Bernard Brantley denied the allegation, saying that if they picked him up they could have arrested him on the basis of the multiple warrants out for his arrest. The officers said that they saw a car speed past them while they were investigating a different suspicious vehicle. They lost the car, but said they saw Hollingshed running across a vacant lot and "looking over his shoulder."